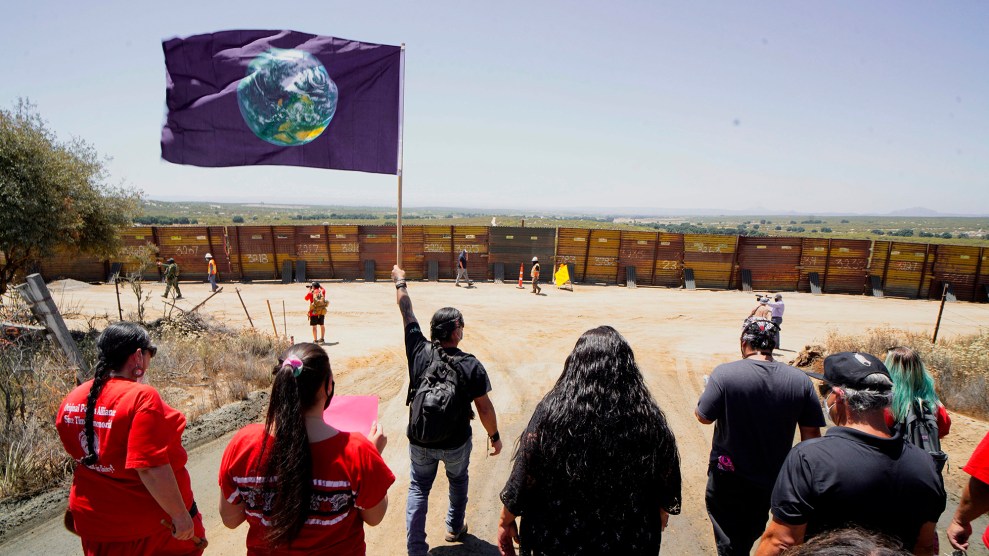 Members of the Kumeyaay band of Indians and demonstrators rally at the United States-Mexico border to protest construction of new wall being constructed on their ancestral grounds on July 1 in Boulevard, California.Sandy Huffaker/AFP/Getty

In the remote California desert about 50 miles east of San Diego, five protesters gather around a backhoe parked at the US-Mexico border. The sun owns the cloudless sky, and dust coats everyone’s skin. A construction worker flips through a set of keys, preparing to dig a trench for a new stretch of President Trump’s border fence, while the protesters try to engage him. He doesn’t give them any reaction until the moment before he steps up into the cab: “You’re trespassing.”

“You’re trespassing on Kumeyaay land!” says one of the protesters.

“It’s government land,” the worker replies, and starts the engine.

“He’s going to try to move it,” shouts one of the protesters, prompting three others to climb into the backhoe’s giant bucket. After a minute, the worker shuts off the engine, descends from the cab, and walks away.

Similar scenes to this one, from July, have unfolded repeatedly. The protesters are Kumeyaay, members of a nation of 13 tribes that have shared culture, language, and land for more than 12,000 years. Originally, they lived in an area that encompassed all of present-day San Diego County and much of Baja California. The Spanish moved into the area in 1769, Mexico drove out Spain by 1821, and the United States drew a border in 1848 after a two-year war with Mexico. That relatively new political line partitioned the Kumeyaay’s land, putting half in Mexico and half in the United States.

Since then, the Kumeyaay have become experts at protecting what remains of their sovereignty. When Congress outlawed indigenous religious ceremonies in 1883, the Kumeyaay starting holding “fiestas” that look a lot like county fairs, with baseball games, pie-eating contests, and tug-of-war competitions. Then, late at night, they would sneak in their religious events.

Today, even though the Kumeyaay land includes open desert that abuts the international line and members of the tribes live on both sides, Border Patrol requires that Kumeyaay obtain advance written permission to cross. The person in charge of filing the requests told me it’s become harder and harder to get approval under the Trump administration. Some Kumeyaay skirt the system and cross their ancient desert without permission, but that will soon be impossible: In June, the US Army Corps of Engineers began construction on a 30-foot high barrier made of steel bollards which will, for the first time, physically divide all of the Kumeyaay land in half.

On August 11, one of the tribes filed a lawsuit to stop work while various legal questions are settled. Trump has promised to complete 450 miles of new fencing by the end of the year, including the 14-mile stretch through Kumeyaay land. Joe Biden has pledged to stop construction along the border if elected, though he has also said he won’t tear down any fencing that’s in place when he takes office. The Kumeyaay know that their only hope for avoiding the irreparable severing of their land is to run out the clock on the Trump administration and stave off work for a few more months.

And so they’ve been showing up regularly to block the tanker trucks and flatbeds, backhoes and cranes. Today, by some estimates, there are 5,000 Kumeyaay living in the United States and 1,500 in Mexico, and sometimes nearly 100 of them show up for the protests. But most days there are about 20 and they arrive by 5:30 a.m. to beat the workers, who in turn are trying to beat the heat, which can reach 90 degrees by 8 a.m. during the summer. Under a dark blue sky, the protesters circle up for a sunrise ceremony with prayers and songs. In the early days of protests, before things became more confrontational with law enforcement, the circle spread out across the border, as Kumeyaay from the United States and Mexico joined together to sing to the pulse of rattles, shuffling their feet in unison. “It’s really powerful to have the Kumeyaay from Baja come up,” says Olympia Beltran, who’s been at the protests regularly since the beginning of July. “To have dancers and singers from both sides meet face-to-face just shows how insignificant the physical line is. It demonstrates the power of an ancient society.”

The protests gained traction in a matter of days—videos of scenes like the backhoe standoff went viral, and Sen. Kamala Harris tweeted in support. In response, the Army Corps adapted by shifting between locations along the 14-mile construction zone.

“There’s no way to catch up,” says Angela Elliott Santos, the chair of the Manzanita band of Kumeyaay. “When we stop them at a critical site, they turn on machines at a different site.”

There are laws that protect the environment and the Kumeyaay from invasive construction projects, but the Real ID Act of 2005 gave the homeland security secretary broad authority to disregard those laws in the interest of national security. In March, acting secretary Chad Wolf waived 28 laws to build this particular stretch of border fencing, including the Native American Graves Protection and Repatriation Act and the American Indian Religious Freedom Act. Even so, the US government is legally required to enter into “consultation” with the tribes to make sure their cultural sites are protected. Whether the government has fulfilled this obligation depends on how one defines consultation.

Border Patrol won’t answer specific questions about the protests because of ongoing litigation. The agency did send letters to Kumeyaay tribes in March, informing them that the laws would be waived and the work would commence. A written statement from Border Patrol in August emphasized the agency’s commitment to “responsible environmental stewardship” and said there had been “several conversations” with Kumeyaay leaders.

Informal conversations at worksites have taken place between Border Patrol and protesters, but “there has never been a formal government-to-government consultation,” says Michelle LaPena, the lawyer representing the La Posta band of Kumeyaay. In previous cases involving other tribes, consultation has also included giving certified cultural monitors access to the construction sites. If the monitors make any significant discoveries, such as pottery or human remains, then work stops so these items can be recovered and construction plans can be amended, if possible, to minimize the impact on the site. “Remains should be respectfully treated, moved out of the way, and given to the tribe so they can be respectfully reburied,” says LaPena.

Kumeyaay protesters who were onsite when work began in late June say there were no monitors present. After the protests gained attention, the Army Corps started giving monitors access to worksites, but it didn’t change much. “They took me to monitor an area where the bedrock had already been blown up,” says John Eagle Spirit Elliott, a certified Kumeyaay cultural monitor. “When the dust settles after an explosion like that, you really can’t see anything. The rate at which they’re trenching and the amount of dirt that’s being moved, it’s very hard for any monitor—no matter how much experience you have—to really see and protect any artifacts or bones.” He adds, “There are no words I can use to convey how terrible the scene is. It’s hard for the monitors to go out there—physically and spiritually.”

“There’s no way to catch up. When we stop them at a critical site, they turn on machines at a different site.”

“The equipment operators have no idea that there are cultural resources out there,” says LaPena. “The sad possibility is that the dirt comes out of the trencher and potentially has human remains in it. Then that’s made into cement and becomes a part of the border wall.”

At least two monitors have discovered what they believe to be human bones, according to signed declarations in federal court. Border Patrol told the court it hasn’t found any cultural sites within a 60-foot easement along the border. But the footprint of the work goes far beyond this thin strip. New access roads have been created, along with staging areas for supplies and heavy equipment.

Indigenous Americans scored perhaps their biggest legal victory in decades in July, when the Supreme Court affirmed the sovereignty of tribes in Oklahoma, citing the US government’s treaty obligations. The Kumeyaay have no such legal anchor. The 1852 Treaty of Santa Ysabel set aside about 20 percent of present-day San Diego County for the tribes. But the Senate never ratified the treaty, and the Kumeyaay’s land was eventually taken by a series of executive orders, leaving them with only a fraction of the land they’d been promised. “The lack of ratification of the treaty means there was never a legal transfer of title from the Kumeyaay people,” says Kumeyaay historian Michael Connolly Miskwish. “In other words, the San Diego region, and the border itself, sits on un-ceded Kumeyaay land.”

Many of the elders who know this history best haven’t been able to join the protests because of the pandemic, which has disproportionately affected indigenous people. There is always at least one medic present, to deal not only with the virus and the risk of heat exhaustion but also the ever-present threat of violence. Local landowners, many of them armed, turn up on occasion to tell the Kumeyaay that they’re “trespassing on American soil,” as one said in a confrontation captured on video. “We’re ready for really bad things to happen,” says Beltran, herself a medic who regularly carries tourniquets and chest seals.

The Border Patrol agents onsite do little to control the counterprotests. “We have to have the presence of mind to be respectful and speak eloquently to these Border Patrol agents,” Beltran says, “because as soon as we start sharing our grief, as soon as we start crying, as soon as our volume gets higher because of the grief that we’re experiencing, they don’t listen to us anymore. They say, ‘Okay, we’re done. This is irrational.’ But it’s not irrational. I’m sure they would feel the same way if their church was bulldozed.”

Beltran says she frequently sees “Trump 2020” stickers on the hardhats of the Army Corps contractors, and one worker told her, “You need to just accept that this is America now. Get over it. It’s been hundreds of years. Why are you all still out here?”

In August, after nearly two months of protests, a judge denied the Kumeyaay’s request for an injunction to pause construction. It was a devastating blow, but Beltran says her elders remind her to take a long view. “The sense of time is very different for Kumeyaay,” she told me. “I think we’re all feeling grief and sadness having witnessed so much be destroyed, but we have to look at it that it’s just temporary.”

DW Gibson is the author of the new book 14 Miles: Building the Border Wall.