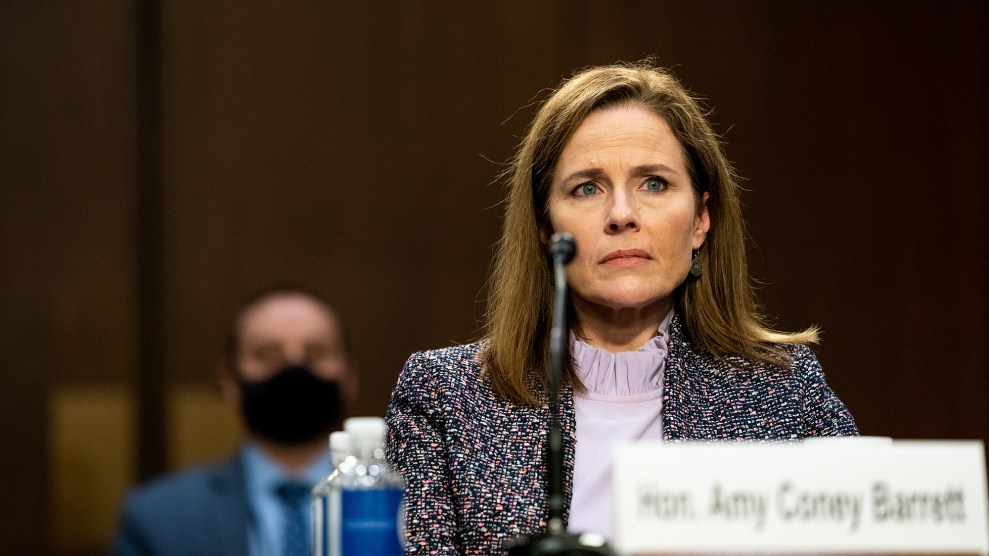 For conservatives eager to eliminate the right to abortion in this country, there is truly no one better suited to potentially trip the kill switch than Amy Coney Barrett, President Donald Trump’s nominee to fill Ruth Bader Ginsburg’s vacant Supreme Court seat.

There’s something darkly poetic about putting forth a mother of seven as the justice who could deliver the end of the constitutional right to an abortion.

Barrett checks all the boxes—she’s an upper-middle-class, conventionally attractive white woman. She’s well educated, intelligent, accomplished, unquestionably poised. She’s a woman of faith, mother to seven children—two of whom are Black, adopted from Haiti—and she is a living, breathing example of a woman who Has It All, a mascot of suburban privilege. So, naturally, we are expected to conclude that as a woman who has found success in her career and her domestic life, she has only the best interests of other women and their health care in mind.

The Right has long adored lifting up women like Barrett, as if to say, “See? We love women, we couldn’t possibly be anti-woman!” Then, when any female candidate meets resistance from the Left, they can point and yell “hypocrisy!” Just look at Sen. Marsha Blackburn (R-Tenn.) bemoaning this very thing during Tuesday’s confirmation hearing: “I will tell you, quite frankly, they do not believe that all women deserve to have the opportunity to have a seat at the table.”

There’s something darkly poetic about putting forth a mother of seven as the justice who could deliver the end of the constitutional right to an abortion. After all, the other message encoded in Barrett’s nomination and in her staunch anti-abortion beliefs is that women don’t really need abortion care in order to gain economic equality and to have an independent, fulfilling life. It’s an attempt to cut through the historical baseline of the abortion rights argument that women must have control over their reproductive lives to enjoy the full span of their constitutional rights. “There’s a kind of pro-life feminism that presupposes that women all want to have it all,” says Mary Ziegler, a professor at the Florida State University College of Law and the author of Abortion and the Law in America: Roe v. Wade to the Present. “There’s this sense that motherhood is natural, and women who are not mothers are depriving themselves.”

Barrett is the latest in a long line of similar (almost exclusively white) women in the anti-abortion movement to take her place in the public sphere. It’s easy to imagine her fitting in easily alongside Marjorie Dannenfelser, who helms the Susan B. Anthony List, or Catherine Glenn Foster, at Americans United for Life, or Charmaine Yoest, VP of Institute for Family, Community, and Opportunity at the Heritage Foundation. Blackburn, too, was clearly trying to ally herself with Barrett during the hearings, with her Oh-I’ve-been-there remarks. All upper middle class, well educated, successful white women who have heralded the fulfillment of motherhood and devoted themselves to protecting women through their anti-abortion work. (To be clear, I do not mock them; I understand why they do what they do, and I have respect for their convictions, in part because growing up conservative and evangelical, I used to hold the same ones.)

The other message encoded in Barrett’s nomination is that women don’t really need abortion care in order to gain economic equality and to have an independent, fulfilling life.

It is their whiteness and their manners and their top-flight educations that lend them the credibility they need to call themselves feminists, bolstering their arguments that restricting abortion is a women’s rights issue because it protects women from a traumatic, unsafe procedure. For the past three decades, there has been a definitive shift within the “pro-life” movement to associate women who are anti-abortion as warrior feminists, set to protect mothers and the unborn from the evils and dangers of abortion. The change was brought about as the movement struggled with an image of being “anti-woman”—for example, as Ziegler cites in Abortion and the Law in America, a Gallup study was done in 1990 at the behest of Americans United for Life to gauge public attitudes about abortion. Then-president of AUL, Guy Condon, summarized the findings like this: Americans felt that pro-lifers were “against women, against the democratic process…and even against one another.” The following year, Ziegler explains, Condon recommended organization-wide arguments that “personalize[d] the unborn” and “personalize[d] women as victims.” That approach has become more popular over time and still exists today within anti-abortion circles and at crisis pregnancy centers.

In fact, more and more big anti-abortion organizations have pivoted to putting a pro-woman, feminist face on an anti-abortion agenda. Women have actually begun to lead the anti-abortion groups, like Susan B. Anthony List and Students for Life. At anti-abortion conferences, female leadership has been known to poke fun at an outdated approach to anti-abortion activism—think sidewalk preachers and gruesome imagery—instead relying on classic feminist imagery to illustrate their message. (My favorite example is of a fetus in a Rosie the Riveter outfit that says, “Keep your philosophy off my biology.”) More recently, this framework has bled into conservatism more broadly, leading (again, mostly white) conservative women like Meghan McCain to decry mainstream feminists’ exclusion of so-called “pro-life feminists.”

This is all part of Barrett’s appeal, especially for her sisters in arms. While she has not engaged in such ideals in any of her legal writing, it is clear within her personal beliefs; Sen. Lindsey Graham (R-SC), chairman of the Senate Judiciary Committee, called her “unabashedly pro-life.” She was a member of a Notre Dame’s University Faculty for Life organization that promoted a network crisis pregnancy centers in South Bend, Indiana, and she signed a letter in support of “overturning Roe,” the famous Supreme Court ruling that granted women’s right to an abortion in the United States. The letter was composed by St. Joseph’s Right to Life, an anti-abortion group that touts its mission to “save children, women, and men from the devastating effects of abortion and euthanasia.” It also features outreach to “post-abortive” women who have regrets about their abortions.

Of course, it’s not certain that Barrett will overturn Roe; it’s more likely that she will aid in chipping away at access in the US by giving legal credence to abortion restrictions that purport to “protect women,” an idea that has also been adopted in the context of abortion clinic regulations that aim to drain clinics of resources, forcing them to pay for unnecessary equipment and medication and to adhere to ridiculous standards.

“There’s a kind of pro-life feminism that presupposes that women all want to have it all. There’s this sense that motherhood is natural, and women who are not mothers are depriving themselves.”

These sorts of pills are much easier to swallow with the sugary, flimsy interpretation of “you-go-girl” feminism. As my colleague Nathalie Baptiste put it, “Part of the problem is the limited understanding of what racism, sexism, and feminism really means. After being co-opted by corporations looking to cash-in on all those empowered feelings, feminism often has been stripped down to simply mean ‘if a woman does it, it is good.'”

As for Barrett herself, she is primed to receive the same sort of marketing treatment that anti-abortion groups began to adopt decades ago—a pro-woman justice who is strong and smart and will smile as she helps narrow women’s rights to bodily autonomy. “You see [Republicans] in Congress trying to make her into a conservative feminist icon, and I think that will probably happen,” Ziegler says. “I think that’s a central part of her appeal.”