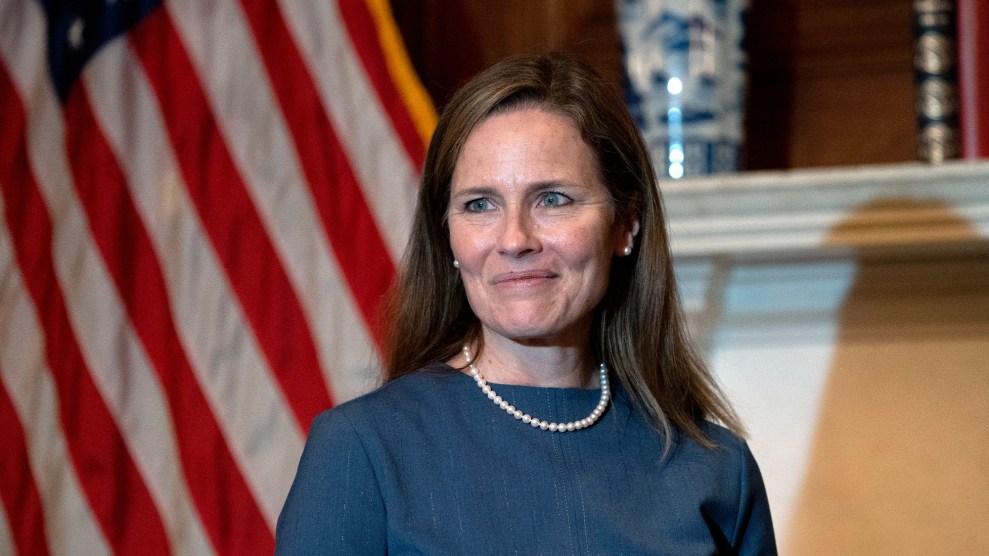 In June, when the Supreme Court decided that it wasn’t going to take up any firearm-related cases in its next term, gun control groups were surprised and relieved. The nation’s highest court had nearly a dozen of gun cases up for potential consideration and a ruling on any one of them could have had a significant impact on the gun safety laws passed in numerous states since District of Columbia v. Heller 12 years ago, which overturned DC’s longtime ban on gun ownership and affirmed that the Second Amendment protects an individual’s right to own a firearm for the purpose of self-defense. And with a firm conservative majority on the Supreme Court—thanks to Trump’s appointments of Justices Neil Gorsuch and Brett Kavanaugh—it seemed poised that an expansion of the Second Amendment was all but inevitable. But it didn’t happen, scoring a major short-term victory for gun control advocates.

Now, with the Senate poised to confirm Amy Coney Barrett—Trump’s pick to replace Ruth Bader Ginsburg—gun rights advocates are once again terrified about how the Supreme Court might dismantle gun safety laws. “Make no mistake: Amy Coney Barrett is a gun rights extremist who has no place on the Supreme Court, and we unequivocally oppose her confirmation,” says John Feinblatt, the president of Everytown for Gun Safety, the gun control group that’s largely funded by billionaire Michael Bloomberg. Shannon Watts, the founder of Moms Demand Action, a subsidiary organization of Everytown, echoes Feinblatt’s concerns: “Amy Coney Barrett’s alarming interpretation of the Second Amendment would make her an ideal Supreme Court Justice for the NRA, but a terrible one for the safety of the American people,” she says.

At this point, there isn’t much that Democratic lawmakers or any advocacy group that opposes Barrett can really do to stop Senate Majority Leader Mitch McConnell’s rush to confirm her. But a spokesperson for Everytown says that the two groups are nonetheless trying, focusing “on digital rather than in-person actions.” Their volunteers have helped to deliver more 35,000 messages opposing Barrett’s confirmation to senators, and the two groups have released a number of memos explaining why Barrett poses such a threat to gun safety laws, in hopes that they might have some sort of sway on any on-the-fence senators.

On Thursday, a group of 31 gun safety organizations, including Everytown, Moms Demand, the Brady Campaign Against Gun Violence, the Coalition to Stop Gun Violence, sent a letter to McConnell, Senate Minority Leader Chuck Schumer (D-N.Y.), and the top two members on the Senate Judiciary Committee, Lindsey Graham (R-S.C.) and Dianne Feinstein (D-Calif.), urging them against rushing to confirm a Supreme Court nominee with such radical Second Amendment views. “Simply put: pushing through a nominee who may support the adoption of a radically dangerous interpretation of the Second Amendment would undermine the will and safety, health, and well-being of all American people, including the constituents you represent,” the letter states.

Barrett does not have a lengthy track record of ruling on Second Amendment cases. But the one gun-related case she has ruled on says a lot about her views. Back in 2019, Barrett—who was appointed by Trump to the US Court of Appeals for the Seventh Circuit in 2017—was part of a three-judge panel that ruled in Kanter v Barr. The case centered on a Wisconsin man named Rickey Kanter who was convicted of felony mail fraud and sentenced to more than a year in prison. Under both federal and Wisconsin law, anyone convicted of a felony is prohibited from possessing a firearm.

“Make no mistake: Amy Coney Barrett is a gun rights extremist who has no place on the Supreme Court.”

Because his conviction was not for a violent crime, Kanter filed a lawsuit arguing that not being allowed to own a gun was a violation of his Second Amendment rights. Ultimately, the Seventh Circuit upheld the federal law, finding that felony dispossession laws are “substantially related to the government’s important interest in preventing gun violence” and that the court is “entitled to categorically disqualify all felons—even nonviolent felons like Kanter—because both have found that such individuals are more likely to abuse firearms.”

But Barrett was the lone dissenting opinion in the case. In her dissent, she took an extremist view of the Second Amendment, arguing that non-violent felons—even a serious one like Kanter, who used his business to defraud Medicare out of hundreds of thousands of dollars—should not be barred from possessing a firearm because it’s unconstitutional. In her dissent, she did not mince words in her disagreement with her colleagues, writing that the court’s ruling “treats the Second Amendment as a ‘second-class right.’” She disagreed with the statistical evidence cited by her colleagues that shows that felons, even those convicted of non-violent offenses, are more likely to commit gun-related crimes. “History is consistent with common sense: it demonstrates that legislatures have the power to prohibit dangerous people from possessing guns,” she wrote. “But that power extends only to people who are dangerous. Founding-era legislatures did not strip felons of the right to bear arms simply because of their status as felons.”

About two months after the Kanter ruling, Barrett spoke at Hillsdale College, a private conservative college in Michigan. During the conversation, she was asked about her dissenting opinion in Kanter v Barr, which she used to clarify her view points even more, describing herself as an “originalist” of the Second Amendment. In writing her dissent in the Kanter case, she concluded that there is “no blanket authorization to just take the right to possess a gun away from someone who committed a felony,” and even admitted that “that sounds kind of radical, to say felons can have firearms,” but defended it nonetheless. In essence, Barrett likened the right for any individual to own a gun for the purposes of self-defense to basic civil rights like voting, and hinted that she might be skeptical of any limitations placed on gun ownership based on prior criminal convictions—even violent ones.

Though the Supreme Court isn’t set to hear any gun-related cases in its current term, there’s still a number of challenges to state gun safety laws tied up in the lower courts that could make it to the Supreme Court in the future—and who’s ruling on them could severely impact gun safety laws throughout the country. The next round of cases could prove to be the most consequential since 2010’s McDonald v. City of Chicago, wherein the court applied the standards of Heller to state laws, not just federal jurisdictions. A pair of cases in New York related to the state’s public carry law could be the first opportunity for the next Supreme Court session to make a ruling on the Second Amendment. One of the cases, New York State Rifle and Pistol Association v Beach, is a lawsuit that’s very similar to one that was originally dismissed by the Supreme Court in late April for being moot. The Beach lawsuit, which is a challenge to New York’s public-carry licensing system, was recently rejected by the Second Circuit Court of Appeals. Like the recent Supreme Court case, the plaintiff in this lawsuit is the National Rifle Association’s New York affiliate. A petition from the plaintiffs to seek another Supreme Court review is due next month, and with Barrett on the court, the ruling might not be the same.

Another case that could be brought before the Supreme Court in the near future is Duncan v. Becerra, a challenge to California’s ban on large-capacity magazines. In August, a divided Ninth Circuit panel struck down the ban calling it unconstitutional. California’s attorney general has since requested an en banc rehearing—a request for a case to be heard before the entire bench rather than just one judge or a panel. But if that’s denied, the state could appeal to the Supreme Court for a review as early as the beginning of next year.

All of this amounts to what could be a doomsday scenario for gun safety groups if Trump and McConnell are successful in confirming Barrett—especially considering that her nomination is heavily supported by the Judicial Crisis Network, a conservative dark money group with ties to the NRA. Even as every Democrat in Congress is opposed to considering Barrett before the election, there’s little power that they have in blocking a confirmation hearing and vote, which terrifies gun safety advocates. “For our movement, an even more conservative Supreme Court is a threat to gun safety laws across the country,” Kris Brown, the president of the Brady Campaign Against Gun Violence, said in a statement to Mother Jones. “There is every reason to fear that Judge Barrett would advance the extreme and unfounded views of the gun lobby on the Supreme Court, threatening needed, common-sense and hard-won gun safety laws across the country.”