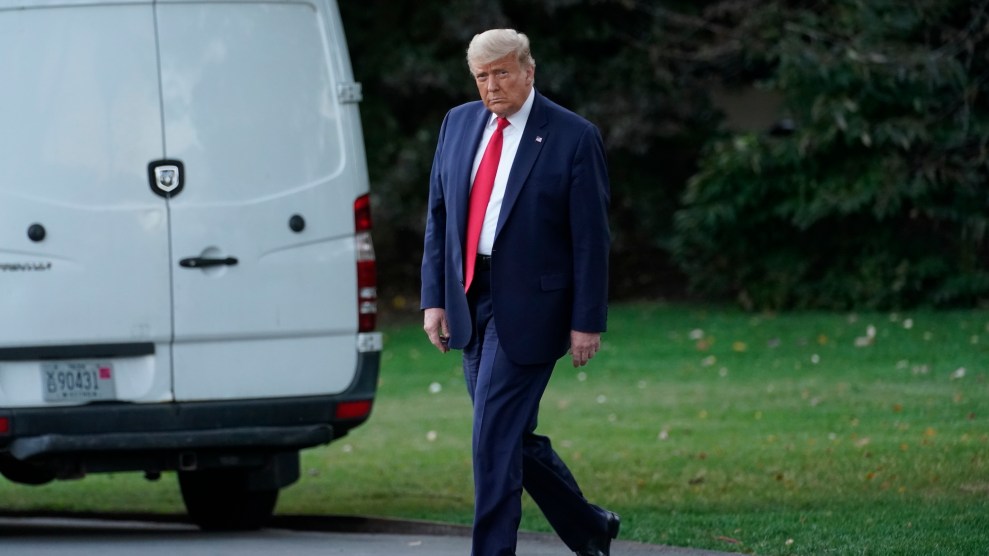 President Donald Trump walks to board Marine One at the White House in Washington, Tuesday, Oct. 20, 2020, for a short trip to Andrews Air Force Base, Md., and then on to Erie, Pa. for a campaign rally. AP Photo/Andrew Harnik

Last month, after fundraising filings showed that his campaign was facing a possible cash crunch in the final weeks of the campaign, Donald Trump pledged to personally bankroll his reelection effort if money was needed.

Well, it’s needed. And a check from Trump has yet to materialize.

Yesterday, his campaign filed its September fundraising report, and it was dismal. Trump entered October with just $63 million in cash on hand. Democratic presidential nominee Joe Biden reported having $177 million, nearly three times as much.

Despite raising around $1 billion with his partners in the Republican Party since 2017, Trump is struggling to attract donations in the homestretch. In September, when his fundraising should have been reaching a crescendo, he pulled in just $81 million. Adjusted for inflation, that’s less than what Mitt Romney’s failed 2012 presidential campaign raised in the same month. And it’s way less than the $281.6 million Biden brought in.

So, Trump is in a hole. What’s he going to do about it? Unlike in 2016, when he gave around $55 million to fund his primary campaign, he hasn’t provided a dime of his own money to the campaign yet this election cycle. Despite the promise he made in September and reports that he planned to fund his campaign to the tune of $100 million, he’s not likely to contribute much at this point, if for no other reason than he probably can’t afford to.

Many of Trump’s hotel and golf businesses were posting declining revenues before the pandemic wreaked havoc on the hospitality sector. Meanwhile, his company is facing looming deadlines to refinance or repay more than $400 million in debt. Trump’s most recent financial disclosure showed that at the end of 2019 he had somewhere between $46.7 million and $156.6 million in checking or money-market accounts. In other words, without raising more cash by offloading assets, it’s not even clear that he has $100 million to loan his campaign to begin with. Even a loan of $50 million might be a heavy lift. Trump does have a stock portfolio, but according to the New York Times bombshell reporting based on his tax returns, he already liquidated a big chunk of that in 2016 to fund his primary campaign. That well is probably dry.

The Trump Organization is allegedly exploring the sale of at least one big property in Westchester County, outside of New York City, but as far as this campaign goes, it’s probably too little, too late.

The Trump campaign did not respond to a request for comment about whether Trump planned to throw a financial lifeline to his campaign.