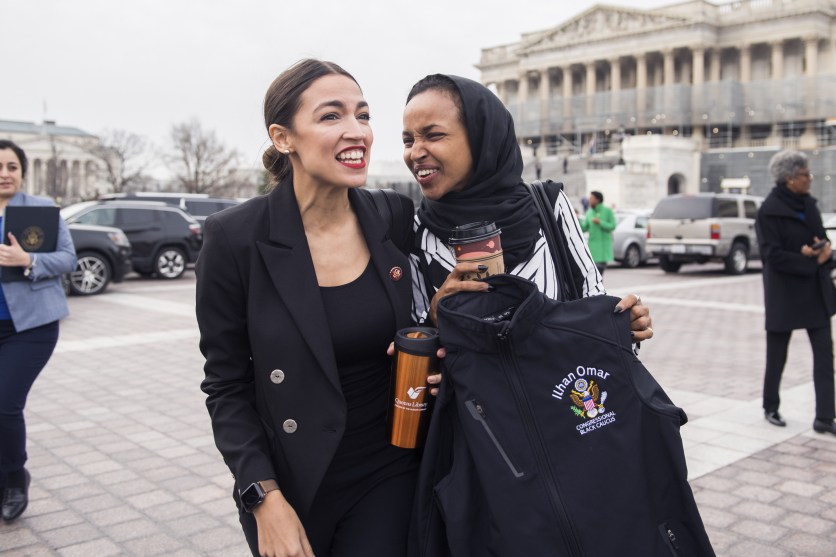 Every day on Twitter, the account “Facebook’s Top 10” tweets out a list of pages that posted the top 10 performing links of the day. And every day is almost always dominated by conservative pages, with posts from Dan Bongino, Ben Shapiro, Fox News and others often holding multiple spots in the top 10. There’s not a popular account that does the same thing for YouTube, but the list of most popular American political YouTubers also heavily skews right, with figures like Ben Shapiro, Steven Crowder, and Tim Pool, who each have over 1 million subscribers. (Crowder has over 4 million.)

It made perfect sense for the representatives to stream to an audience of sympathetic minds.

For all the consternation among conservatives about being censored on social media platforms, that all suggests that their ideology is doing great online. Even on Twitter, which seen as more of a hub for the left, Donald Trump, his children, and the extended constellation of posters who support them enjoy large followings. The Amazon-owned video game streaming platform, Twitch, is maybe the only major online platform where conservatives haven’t been able to build the same ideological stronghold.

A 4chan, Gamergate brand of internet, troll conservatism is inextricable from gaming, but some of the largest political streamers on Twitch are liberals or leftists like the former Young Turks host Hasan Piker, who has almost 600,000 subscribers, BadBunny, who has over 150,000 subscribers, and Destiny (who occasionally veers to the right) with over 550,000 subscribers.

In this regard, it made perfect sense for Democratic Representatives Alexandria Ocasio-Cortez and Ilhan Omar to stream themselves playing Among Us, a multiplayer game where players work as a team to figure out who is sabotaging the crew of their spaceship, on Twitch to 400,000 viewers alongside Piker, Pokimane, and other popular streamers on Tuesday night. Their game play, and exhortations to the audience to vote, were being watched by mostly younger and largely sympathetic minds that have been primed by Destiny, Piker, and others.

I spoke with Piker when I profiled Destiny (whose real name is Steve Bonnell) last year, who explained how he’d ended up on Twitch after feeling boxed out of other platforms where conservatives had established strongholds:

I think the right-wing foothold on YouTube is very significant. They already have money interest backing these channels they already have like legitimate media entities backing up these like Stephen Crowders of the world. So it’s, it’s a really uneven field. So I was like, ‘I can’t even compete with this.’ I’m just going to start somewhere else. So I went to Twitch.”

Piker added that he was concerned that this could eventually flip. “Another reason why I don’t really ever like to do media…do interviews on my Twitch stuff,” Piker told me “is because like I’m genuinely fearful [that they’ll try to come to Twitch].”

Streamers have spent months and even years championing leftist politics.

The communities that streamers build-up based on constant audience interaction and response are uniquely intimate and involved in ways that passively watching a YouTube channel or reading Facebook posts can’t compete with. When I peered over Piker and Bonnell’s shoulders while they streamed, I could see their followers reacting in real-time, organically acting in unison to unleash coordinated emoji responses. Piker and Bonnell would respond directly to their communities, in kind. When Piker and Bonnell talked about their community, they described it as having its own personality, and when I talked to their followers on their chats, they knew intimate details about their favorite streamers’ major life events, pet peeves and day to day tendencies. That kind of deep relationship makes fans more willing to mobilize in favor of whatever you ask them to, whether that’s to watch a politician stream or to text bank for a candidate. Those fans are likely even more willing to mobilize after streamers like Piker and others have spent months and even years championing leftist politics.

People are always predicting the next technology that will reshape politics. Most don’t live up to the hype. Ahead of 2016, the explanding live streamed video led some to christened it the Meerkat and the Snapchat election. But even as major platform made their own live stream apps, including Twitter’s Periscope and Facebook’s Instagram Live, live streaming seemingly had little to no impact on the election. The same went for Snapchat. Live streams from the 2020 Democratic primary sometimes just produced weird fodder that didn’t seem to necessarily benefit candidates.

But as Politico‘s Zach Montellaro pointed out, Ocasio Cortez’s impromptu Twitch stream was probably this election cycle’s “single largest event to reach young voters.” Twitch may not remake politics, but as long as it remains a place where progressive politicians can command audiences of that size, expect to see more Democrats there.