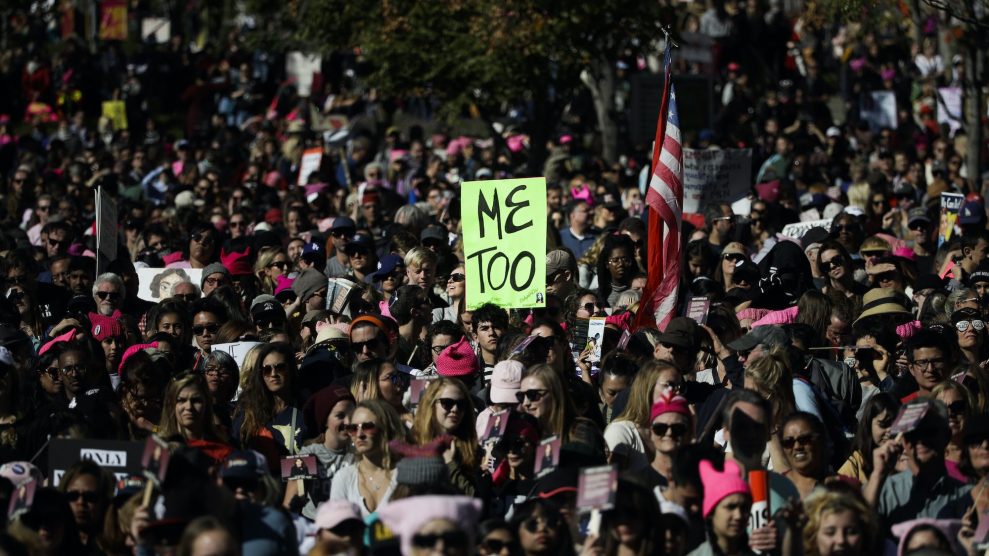 Not long after Brett Kavanaugh landed a lifetime gig on the Supreme Court, Mónica Ramírez started thinking about what it would take to make survivors of sexual violence into a political force to be reckoned with. The founder and president of Justice for Migrant Women, Ramírez had worked with survivors for much of her career; after the #MeToo hashtag went viral she’d penned an open letter to Hollywood actresses on behalf of female farmworkers, helping spark the Time’s Up movement against workplace discrimination and harassment.

But looking back in the spring of 2019, Ramírez felt that not enough had changed after #MeToo became a phenomenon. Survivors had told their stories and shared their pain, but politicians responded with little more than platitudes. “We heard all of this talk,” Ramírez says. “What we didn’t see was the passage of laws to make things better for survivors.”

She started having conversations with a group of prominent advocates she calls her “sisters in the work”: Fatima Goss Graves, the president and CEO of the National Women’s Law Center; Ai-jen Poo, the cofounder and executive director of the National Domestic Workers Alliance; and Tarana Burke, the racial and gender justice activist who founded the original “me too.” Movement in 2006 to organize survivors, especially women and girls of color. “What would it look like if we really figured out how to position survivors as a voting bloc?” Ramírez recalls asking them.

In a break with decades of efforts to expand the policing and prosecution of sex crimes, the agenda calls for limits on the power and reach of cops and courts.

But the organizers had much bigger ambitions than making #MeToo a debate talking point. “We’ve already driven so much change in our culture on these issues,” Burke said during a virtual summit for survivors last month. “Now it’s time to drive change in our policies and politics.” At that event, they released the “Survivors’ Agenda,” a sweeping vision for the political future of the movement against sexual violence. Crafted with input from dozens of organizations and a survey of more than 1,100 survivors, it calls for broad changes to federal, state, and local laws as well as policy changes and cultural shifts inside schools and corporations. Among its demands are a nationwide mandate for comprehensive sex ed, guaranteed mental health care coverage, and boosts in pay and protections for workers vulnerable to sexual harassment. And it endorses more than 20 federal bills covering everything from access to contraception to rent relief for struggling families.

Just as notable as what the Survivors’ Agenda calls for is what it doesn’t. Its outline for systemic change has little to do with the exposure and prosecution of powerful abusers that has dominated the national conversation about #MeToo. In a break with decades of efforts to expand the policing and prosecution of sex crimes, the agenda calls for limits on the power and reach of cops and courts. It does not discuss making it easier for survivors to report to police or demand longer sentences for perpetrators. Instead, it recommends replacing school police with counselors, decriminalizing consensual adult sex work, and rerouting some police funding earmarked for addressing sexual assault to holding more officers accountable for their sexual misconduct. “Too many of our current strategies that purport to protect the safety of survivors are rooted in the criminal legal system,” the agenda states.

Since the antirape movement started in the 1970s, its focus has been, in large part, a law-and-order one. In the movement’s first two decades, women outraged at the legal system’s failure to respond to sexual violence lobbied to expand the definition of rape, pass rape shield laws, and eliminate corroboration requirements for survivors’ testimony. Related campaigns against child sexual abuse and domestic violence led to the establishment of sex offender registries and mandatory-arrest policies for suspected abusers.

These efforts were successful not just because of the moving testimony of survivors, but because the idea of cracking down on these crimes made a “feminist” agenda palatable even to conservative lawmakers, says Smith College sociologist Nancy Whittier who studies women’s movements. As activists set up organizations to help survivors and sought government funding, the anti-rape movement “transformed from a radical grassroots social movement to an institutionalized set of social services that relies heavily on the remedies offered by the legislative process and the criminal legal system,” writes Beth Richie, director of the criminology, law, and justice department at the University of Illinois at Chicago, in her book Arrested Justice: Black Women, Violence, and America’s Prison Nation. The culmination of the trend was the Violence Against Women Act, authored by then-Sen. Joe Biden as part of the 1994 crime bill, which paired big bucks for police and prisons with crucial funding for prevention programs and services for survivors.

This approach has always had its critics. Many of them were women of color like Angela Davis and Mari Matsuda, who drew parallels between the ugly history of rape and race in the US with the ways the criminal legal system disproportionately punished Black men while discounting the experiences of Black women.

The new Survivors’ Agenda, spearheaded by four women of color, builds on those critiques by offering an expansive vision of what preventing and responding to sexual violence entails. “We started with things like, what does it look like to ensure survivors have safe and stable housing? What does it look like to ensure they have comprehensive health care that meets their needs?” Goss Graves says. “Survivors have a thing to say about what it looks like to have spaces and communities are safe. Otherwise, there’s a real risk that they’re misused by folks who have agendas that are not about their safety.”

Many survivors’ visions of safety do not include cops. Speaking about the undocumented women she has worked with, Ramírez says, “For many of them, going to the police for help is not really an option because they’re afraid that they will be deported, or they’re afraid that their family members will get in trouble.” Condencia Brade, the executive director of Sisters of Color Ending Sexual Assault and a member of the agenda’s steering committee, points out that most survivors don’t engage with the police, though she believes they should have the option to do so. “When we have the vast majority of our resources focused on response that’s grounded in the criminal justice system, then that’s not going to help the vast majority of survivors in general—and definitely women of color,” she says.

The Survivors’ Agenda demands investments in restorative justice programs as well as non-police “crisis teams” that could respond to domestic or sexual violence. It also calls for funding for community organizations to develop programs for holding perpetrators accountable without involving the police or government. “A lot of what we talk about currently is focused not on the healing of the survivor, and really on the punitive measures, how do we ensure that perpetrators are held accountable,” Ramírez said in a “National Call to Action” livestream about the agenda in June. “We have to create the space for thinking about justice from the survivor’s perspective.”

George Floyd had been killed a month earlier, sparking a national uprising against racism and police violence and intensifying arguments about the need for alternatives to police. “It is definitely a conversation that showed up in the agenda in a very powerful way,” Ramírez told me. The renewed call for racial justice has also shaken up mainstream providers of services to survivors. In June, 47 state coalitions against sexual assault and domestic violence signed a letter acknowledging that they and their largely white leadership had failed to listen what Black women in the movement had been saying for a long time: that the emphasis on policing, prosecution, and imprisonment had promoted “false solutions” to sexual violence while endangering survivors of color.

Despite the Survivors’ Agenda’s ambivalence toward the criminal legal system, it does not call for abolishing police or prisons. Abolition “is a contentious conversation amongst survivors,” says M Adams, a leader in the Movement for Black Lives, which has publicly supported the agenda. As a community organizer working with survivors of color in Madison, Wisconsin, Adams has been part of campaigns to free Black survivors of sexual or domestic violence who were locked up for defending themselves. She acknowledges that some survivors do feel like they’ve been helped by police intervention. Others “don’t know another way.” The new agenda, she says, “is speaking to survivors to say, ‘Can we together imagine something different?'”

Even with the recent sea change in public opinion about the police, many of the Survivors’ Agenda’s goals are far beyond what seems feasible in the current political climate. Parts of the agenda could be accomplished relatively quickly if Biden wins the presidency, such as rolling back the campus sexual assault regulations enacted by Education Secretary Betsy DeVos, which Goss Graves says reduce schools’ obligations to respond to harassment. (The National Women’s Law Center is going to trial against DeVos over the regulations next month.) Ramírez expects to brief members of Congress and other politicians on the agenda to pressure them to take action; the organizers already have an ally in Rep. Ayanna Pressley (D-Mass.), who revealed her own experience as a survivor earlier this year and spoke at the September summit. Still, the agenda’s call for alternatives to policing sexual violence is likely to be a non-starter on Capitol Hill. “The use of extreme criminal penalties as a way of indicating extreme cultural disapproval of sexual violence is just so entrenched,” Whittier says. “It’s hard for an elected official, even a relatively liberal one, to support anything other than prosecution and imprisonment.”

“It’s hard for an elected official, even a relatively liberal one, to support anything other than prosecution and imprisonment.”

To make change, the agenda’s organizers emphasize, survivors must be respected as political and cultural leaders, not just victims called upon to tell their stories. In June, during the “National Call to Action,” Tarana Burke compared the uprising against systemic racism to the fight to end sexual violence. “What we’re seeing in the streets, what we’re seeing nightly on the news, what we’re seeing in our communities,” she said, “are people who are most directly impacted by the injustices they are fighting against rising up to say, ‘We have answers.”

Survivors, Burke added, needed to do the same: “Inherent in survival is power. We’re just here to exercise it.”