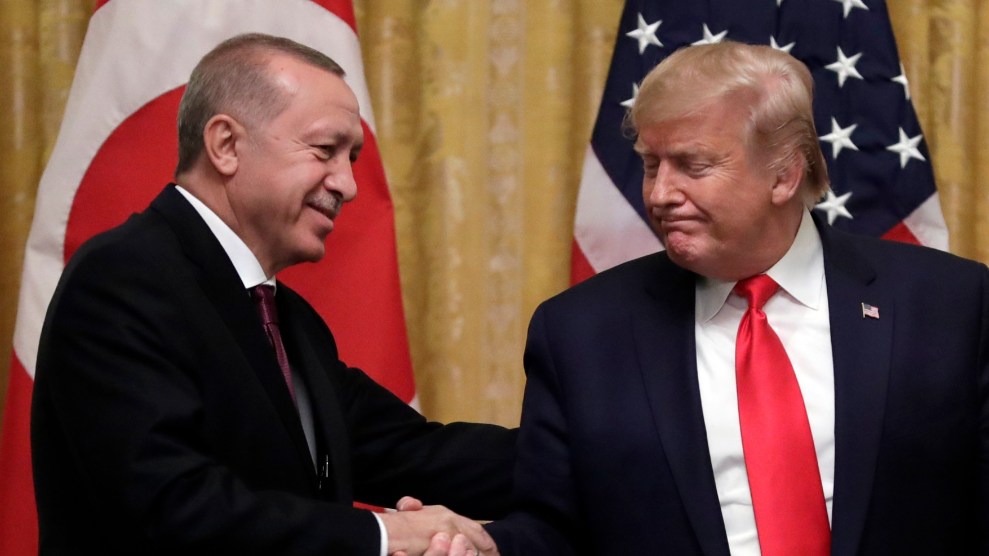 In December 2015, Donald Trump, then a presidential candidate, made a casual admission. “I have a little conflict of interest ’cause I have a major, major building in Istanbul,” Trump told his interviewer, Steve Bannon, who would later take over Trump’s presidential campaign, on a Breitbart radio show. “It’s a tremendously successful job. It’s called Trump Towers—two towers, instead of one, not the usual one, it’s two.”

Trump’s conflict in Turkey is actually not little.

Last month, more than 150 paragraphs into its 10,000-plus word expose on Trump’s taxes, the New York Times revealed that Trump has pocketed “at least $13 million — far more than previously known — including more than $1 million since he entered the White House” through a 2008 licensing deal in which he is paid for his name to appear on two glass towers in Istanbul.

“There is every reason for us to be concerned that he directed the Justice Department to give Erdogan what Erdogan wanted.”

The deal enmeshed Trump in Turkish politics: The buildings are owned by a wealthy ally of Turkey’s authoritarian president, Recep Tayyip Erdogan. And the businessman who helped to negotiate Trump’s deal, Ali Yalcindag, now serves as chairman of the Turkey-US Business Council, lobbying the Trump administration on behalf of Turkish businesses; Yalcindag told the Times that he has “remained friendly” with Trump since they brokered the deal.

The corruption here became even more clear on Thursday, when the Times reported new details on efforts by the president and members of his cabinet to quash an investigation by federal prosecutors into an alleged sanction-violating scheme by a Turkish state-owned bank following personal pleas from Erdogan to Trump. Federal prosecutors alleged Halkbank evaded US sanctions on Iran and believed the scheme “had helped finance Iran’s nuclear weapons program,” the Times reported.

Trump’s effort to help Erdogan on Halkbank “illustrates how compromised President Trump is,” says Kathleen Clark, a law professor at Washington University in St. Louis. “There is every reason for us to be concerned that he directed the Justice Department to give Erdogan what Erdogan wanted, and that he did that not out of his conception of the public interest, but instead out of his conception of his own personal interest.”

This major conflict of interest exists because the president refused to divest from his businesses after his 2016 victory. Critics say this is part of Trump’s rampant violation of the Constitution’s emoluments clause, which bars federal office holders from accepting gifts, payment, or other things of value from a foreign states.

Now, as Trump closes his campaign to seek a second term, we can clearly see a record of the president appeasing Erdogan on a host of matters—resulting in well-founded concern, expressed even by Trump’s former national security adviser John Bolton, that the president is motivated by personal, not American interests in his dealings with Turkey.

Prosecutors homed in on Halkbank in late 2017, after securing a guilty plea and cooperation agreement from a participant in the scheme, a gold trader named Reza Zarrab, whose legal team included former New York Mayor Rudy Giuliani and former Attorney General Michael Mukasey. When prosecutors sought to draw up charges against the bank, former acting Attorney General Matthew Whitaker pushed Southern District of New York prosecutors to instead shut down their investigation without charging the bank, according to Times.

Last year. Attorney General Bill Barr, who replaced Whitaker, pushed Geoffrey Berman, then the US Attorney for the Southern District of New York, to settle with the bank on terms that were favorable to Halkbank and which Berman considered unacceptable, unethical, and “completely wrong,” according to the report. Among other things, Barr reportedly wanted to grant immunity to key Turkish officials with ties to Erdogan—even though they had not provided cooperation, which would normally be required for such a deal. Also, at Trump’s behest, Treasury Secretary Steve Mnuchin pushed DOJ not to impose too large a fine on Halkbank.

Bolton told the Times that he was disturbed by the tone of the interactions between Trump and Erdogan with regards to Halkbank. “It was so idiosyncratic, so personal to Trump in the pursuit of personal relationships, that it was very dangerous,” Bolton said. “And it does look like obstruction of justice.” Last year, Bolton also reportedly told a private gathering of hedge fund investors that he believed a personal or business relationship dictated Trump’s positions on Turkey.

Mother Jones has also reported on efforts by Brian Ballard, a lobbyist and major fundraiser for Trump, to help the bank avoid indictment. Ballard lobbied Vice President Mike Pence’s office, as well as Jay Sekulow, one of Trump’s personal lawyers who represented pro bono Andrew Brunson, a pastor who was imprisoned in Turkey in 2016. People familiar with Ballard’s outreach said it related to Turkey releasing Brunson in a bid to win more favorable treatment for Halkbank. Turkey in fact released Brunson on October 12, 2018, not long before Whitaker and Barr pushed for restricting the Halkbank investigation.

We can clearly see a record of the president appeasing Erdogan on a host of matters—resulting in well-founded concern that the president is motivated by personal, not American interests in his dealings with Turkey.

Trump’s actions on Halkbank are only one instance where his financial interest in Turkey may have influenced his actions toward the country. In a phone call with Erdogan last October, Trump okayed Erdogan’s request to send Turkish troops into Syria, a move that endangered Kurds, who were allied with US forces and were longtime foes of the Erdogan regime. Unexpectedly, the decision backfired on Halkbank after Trump, stung by bipartisan criticism in Washington, threatened to impose economic sanctions on Turkey over the invasion. This acrimony appears to have led the Justice Department, in an October 15, 2019 decision it has not explained publicly, to give prosecutors in Manhattan approval to file charges against Halkbank. The same day, Southern District prosecutors indicted Halkbank for money laundering, bank fraud, and conspiracy to violate Iran sanctions.

This fall, Trump has not publicly faulted Erdogan for Turkey’s extensive support for Azerbaijan’s war with Armenia over the Nagorno-Karabakh region—an ethnically Armenian, functionally autonomous area within Azerbaijan’s borders. Turkey has provided weapons and training for Azerbaijani forces widely seen as aggressors in the conflict. Armenia has also charged that Turkey has dispatched fighter jets, drone operators, and even mercenaries from Syria to help Azerbaijan—claims the Turks deny. Backed by Turkey, Azerbaijan has resisted US efforts to broker a ceasefire.

It is nearly impossible to know to what extent Trump’s personal interests motivate his conduct toward Turkey. But we don’t need hard proof to know Trump maintaining a source of income in Turkey is corrupt. “We shouldn’t have to wait for some memo indicating that is what caused him to ask the Justice Department to act that way,” Clark says. “The presence of financial interests, conflicting interests, is enough to be a problem.”