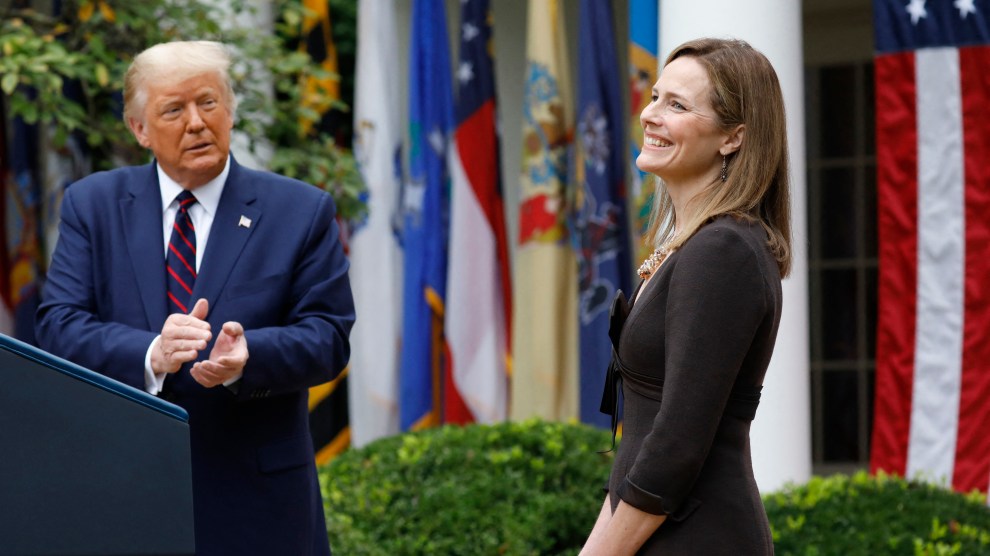 That’s what President Donald Trump told CBS this week, referring to an upcoming Supreme Court case that will decide the fate of Obamacare. On November 10, the court—which will almost certainly include three Trump appointees—will hear arguments in the latest Republican challenge to the landmark health care law. If the justices side with Trump, millions of Americans could lose their health coverage. The president has repeatedly insisted that if the Affordable Care Act is eliminated, he’ll somehow replace it with a better health care program and protect people with preexisting conditions. But he hasn’t presented a viable plan to do so.

“A small chance of a very bad outcome is worth worrying about.”

The case, California v. Texas (in the lower courts, it was called Texas v. United States), hinges on whether Trump’s 2017 tax cuts—which reduced the financial penalty for failing to obtain health insurance to $0—invalidate the entire ACA. Back in 2012, a sharply divided Supreme Court had ruled that the ACA’s individual mandate qualified as a tax and was thus a valid exercise of Congress’ constitutional powers. But late last year—in response to a lawsuit filed by Republicans—a federal appeals court struck down the mandate, reasoning that because the new tax law zeroed out the penalty, the mandate could no longer be considered a tax. Yet the stakes are far higher than the fate of the individual mandate. The GOP plaintiffs, along with the Trump administration, have argued that the mandate is inseverable from the rest of Obamacare—that is, they say that if the mandate is struck down, everything else in the ACA is invalid, too. It’s a brazen argument, widely derided by experts. Now, the conservative-dominated Supreme Court will weigh in.

Nicholas Bagley, a professor of law at the University of Michigan, was one of four health law experts to file an amicus brief in May arguing that the individual mandate is indeed severable from the rest of the ACA and that the law should survive even if the mandate is invalidated. “Any other conclusion,” the scholars write, “would be a judicial usurpation of Congress’s lawmaking power.” In an interview with Mother Jones, Bagley explained the potential consequences of the case and what will happen next if the Supreme Court kills Obamacare. The conversation below has been condensed and lightly edited for clarity.

Do you think there is a reasonable possibility that the Supreme Court overturns the Affordable Care Act? Or is the legal argument too far out?

Both. I think the lawsuit is a long-shot. The arguments in the lawsuit are very weak, and the plaintiffs have to win three very difficult arguments in order to prevail: They’ve got to show the court that they have standing. They have to win on the merits. And then they’ve got to win their severability argument on remedy. And they could fail at any one of those three points. They’ve got to run the table in order to win. That said, especially with the 6-to-3 super-majority conservative court, there’s a chance—it’s small, but a small chance of a very bad outcome is worth worrying about.

Could the whole problem be resolved by raising the penalty for not having insurance to $1?

Definitely. We could repeal the offending language, or actually add a severability clause [stating that if one part of the law is invalidated, the rest of the law survives]. It would take one sentence of text, and it would get rid of the lawsuit immediately.

Is it normal for legislation to have severability clauses? Why doesn’t the ACA?

It is quite common, especially for big pieces of legislation. One thing to keep in mind with the Affordable Care Act is that it was a rough draft. It was never meant to become law in the form that it did.

Back in 2010, the Senate passed the Affordable Care Act when they still had a filibuster-proof majority, and the law went to the House, and the House passed a different version that would have gone to a conference committee. But in the meantime, Ted Kennedy died and Scott Brown [a Republican] was elected in his place, so the Democrats no longer had a filibuster-proof majority. Instead, Democrats passed the Senate bill in whole and then passed a sidecar bill through reconciliation authority. So there are a series of mistakes and oversights in the Senate bill that would have been corrected in the conference committee, and the lack of a severability clause may well have been one of those things.

Trump has signed several executive orders saying he would protect people with preexisting conditions and enact an “America First” health plan. Why do these orders not carry the full weight of law that the Affordable Care Act does?

We live in a government of laws. The president can sign a piece of paper, but unless he has the legal authority to bind private parties, it has no more legal weight than a tweet. He’s trying to gaslight the American public into thinking that he has a plan.

Even more to the point, if you look at the executive orders themselves, they don’t even purport to actually impose any legally binding obligations. They just say that it is the policy of the United States to support protections for people with preexisting conditions. I don’t even know what that means, but it’s certainly not a legally binding command to insurance companies not to discriminate against people who are sick.

Would it be possible, if the ACA were overturned, for certain states to keep their marketplaces, or to enact laws keeping certain provisions of the ACA?

They could do some things to maintain the protections that are in place, but the short answer is no, they’re going to struggle.

The big problem with health insurance is that it’s expensive, so to get people who lack insurance covered, you’ve got to spend money. The federal government has the ability to deficit spend, so it can spend as much as it needs to in order to cover folks. States have to balance their budgets, and that means that any dollar they spend is either going to have to be reflected in an increase in taxes, or in a decrease in other services, like education or roads.

The ACA has two big funding streams, one for Medicaid and one for insurance purchased on the private exchanges. If you eliminate those two funding streams, the states have very limited fiscal authority to step into the breach, which is why, before the Affordable Care Act, only Massachusetts and Hawaii had achieved something like near universal coverage. It’s just too expensive for most states to go it alone.

If the Supreme Court did find that the lack of an insurance mandate invalidated the whole ACA, what precedent would that set for severability cases in the future?

I think it would be a very aggressive severability holding, and one that runs counter to the broad drift of Supreme Court case law. The presumption is in favor of severability, not invalidating a whole law as constitutionally infirm.

But—and this is a fairly important but—the severability doctrine is really a pretty malleable counterfactual inquiry, because what you’re trying to do is figure out what Congress would have wanted to do had it known that the provision in question was unconstitutional, which of course it didn’t. That’s an inquiry where different judges can have different instincts, and that means that a decision about whether a particular provision is integral to a particular law may not have much bearing on a case about a different provision.

So, is it impossible to get to the result that the entire ACA is invalid? No. Would it portend a massive shift in how the court goes about severability analysis? Probably not. Sometimes big cases can issue decisions that are good for one train and one train only. You could imagine this case being one of them.

What sort of a harbinger could this be for future attempts at instituting something approaching universal health care?

I don’t think the Affordable Care Act case is going to tell you what you need to know there. The conservative movement is aimed primarily at throwing a wrench into government, out of commitment to a set of libertarian ideals, and if you think that any major piece of Democratic legislation is going to make it through a supermajority conservative court, I think you’re not paying attention. The stakes here really could not be higher, not for the Affordable Care Act, but for future legislation.

Amy Coney Barrett has told us that if she had been on the Court in 2012, she probably would have sided with the challengers in that year’s lawsuit against the ACA. That means that if we had had a 6-3 court back when the Affordable Care Act was adopted, it would have been struck down. And I have no reason to think that future legislation will be treated more humanely by a 6-3 court. It’s a dangerous situation.

Welcome to my life.

I think people don’t get it. I clerked at the court, and when Chief Justice John Roberts and Justice Samuel Alito came to the court, it was a conservative majority for the first time. I think people were taken aback by how conservative they were, but it kind of didn’t penetrate public consciousness. I think the vote to sustain the Affordable Care Act the first time around and the occasional vote in favor of social causes led people to think that it was a moderate court. It’s not. It is a hard-right conservative court, and it will be for decades.