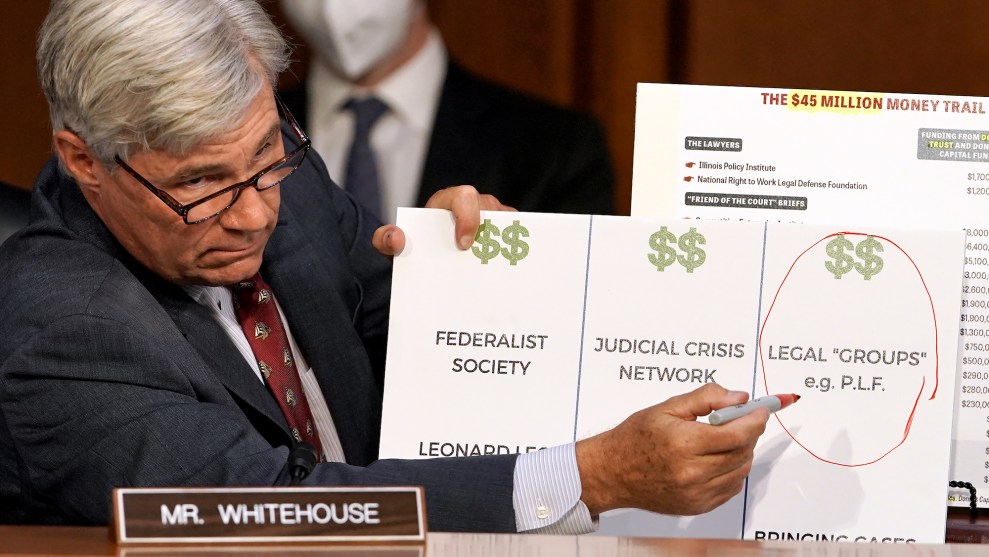 The confirmation hearing this week for Amy Coney Barrett, President Trump’s nominee to the Supreme Court, is largely a piece of political theater, whose outcome is already a given. “This is probably not about persuading each other unless something really dramatic happens,” Senate Judiciary Committee Chairman Lindsey Graham (R-S.C.) conceded in his opening statement Monday. “All Republicans will vote yes, and all Democrats will vote no.” And Barrett will be confirmed to her lifetime appointment.

With no way to block the confirmation, Democrats instead have used the time to focus not so much on the nominee in front of them but on issues relevant to the process. Sen. Sheldon Whitehouse (D-R.I.) took his full 30 minutes to provide a Schoolhouse Rock!–style tutorial on the dark money forces at work behind Barrett’s nomination—a process he called “The Scheme.” Citing the Washington Post, Whitehouse described a $250 million dark money operation designed to capture the courts and push cases to friendly judges in the hopes of favorable rulings. “Two hundred and fifty million dollars is a lot of money to spend if you’re not getting anything for it,” he said. “So that raises the question: What are they getting for it?”

To answer that question, Whitehouse provided charts and bullet points that would make Glenn Beck proud. One of his posters laid out the Republican Party’s own words explaining precisely what they want from judicial nominees: “A Republican president will appoint judges … who will reverse the long line of activist decisions—including Roe, Obergefell, & the Obamacare cases,” referring to the landmark abortion, same-sex marriage and health care cases. “That is their stated objective and plan,” Whitehouse said. “Why not take them at their word?”

The Republicans, Whitehouse noted, seem to be getting their money’s worth. Their judicial nominees have voted in at least 80 cases where “there is an identifiable Republican donor interest” and ruled in their favor, to the detriment of workers’ rights, women’s rights, voting rights, and the environment. Whitehouse, who is a former US Attorney, sounded like someone delivering a closing argument in the courtroom. He blamed the Supreme Court’s 2010 decision in Citizens United, which allowed unlimited money to flow into political campaigns, for the current situation.

Whitehouse drew arrows with sharpies and explained in remarkably clear terms how anonymous money has fueled conservative legal advocacy groups like the Federalist Society and the Judicial Crisis Network that have spent millions cultivating and promoting conservative, ideological candidates like Barrett for the federal bench. He even held up a copy of one of the ads that anonymous money had paid for in support of Barrett’s nomination that explicitly suggested she’d overturn the 1973 abortion rights decision Roe v. Wade.

At the heart of Whitehouse’s chart was Donors Trust, a shadowy foundation the senator described as an “identity scrubbing” operation that allows rich donors to hide their contributions to influence judicial nominations and weaken federal regulations. Donors Trust has funnelled millions of dollars over the years into groups working for a conservative takeover of the federal courts, without ever disclosing where the money came from.

Donors Trust is not the source of the money it hands out. Some 200 right-of-center funders who’ve given at least $10,000 fill the group’s coffers. Charities bankrolled by Charles and David Koch, the DeVoses, and the Bradleys, among other conservative benefactors, have given to Donors Trust. And other recipients of Donors Trust money include the Heritage Foundation, Grover Norquist’s Americans for Tax Reform, the NRA’s Freedom Action Foundation, the Cato Institute, the American Enterprise Institute, the Federalist Society, and the Americans for Prosperity Foundation, chaired (PDF) by none other than David Koch.

Whitehouse asked no questions of Barrett, who appeared somewhat bewildered by the mind-boggling and complicated network of interests and money described in Whitehouse’s charts. As with many Supreme Court nominees before her, she has declined to express an opinion about Citizens United, political dark money, or really, much of anything, during the first two days of the hearings.