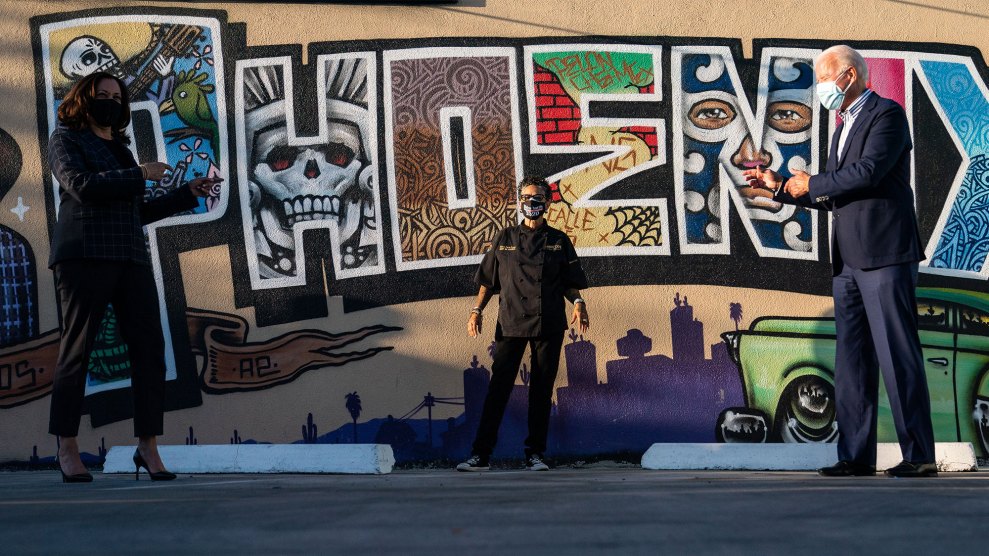 For years, the news out of Maricopa County, Arizona, was bleak. It was the site of former Sheriff Joe Arpaio’s infamous Tent City jail, the epicenter of anti-immigrant and anti-Latinx laws like SB 1070, and the staging ground for vigilante groups like the Minutemen. But after a week of daily vote count updates showed that Joe Biden would defeat Donald Trump there—and at the same time hold onto his statewide lead—it’s now clear that Latinx activists and Democratic politicians have scored one of their biggest wins in years in Arizona’s largest and most influential county.

As of Thursday, Biden had a roughly 12,000-vote lead in Arizona, thanks in large part to his 45,000-vote advantage in Maricopa County. These margins can largely be attributed to the work of the Latinx organizers I first wrote about in September, who ran countless voter registration events, information campaigns, and GOTV efforts to push for candidates and propositions that support their communities. Leading up to Election Day, a collective of local groups knocked on more than 1 million doors and made almost 8 million phone calls focused on Latino, Black, and Native American voters. The result was high turnout from those communities, with more than 70 percent of Latinos—who make up about a quarter of the total electorate in Arizona—supporting Biden.

That turnout was crucial in Maricopa, a diverse county of about 4.5 million people that includes Phoenix and the many suburbs that surround it. “You can drive for 20 minutes on the freeway and be in a really fancy part of town like Scottsdale or Paradise Valley, with millionaire estate homes,” says Edder Martinez, a communications director with the Maricopa County Democratic Party. “And then you can jump on that same freeway and head out west, and you will be in some of the worst affected areas by COVID and just downtrodden neighborhoods that have been ignored for a long time.”

Martinez said there were a few key parts of Maricopa where Democrats focused their outreach efforts, including the central part of the county, plus traditionally Black and lower-income District 27 and primarily Latinx District 19, because voters there “had been ignored by leadership in the past.” Southwest of Phoenix, the district encompassing the majority-white city of Chandler also showed “good turnout for us in high numbers.” (It didn’t hurt that Cindy McCain, a key Republican figure and the widow of longtime Sen. John McCain, broke with party lines by endorsing Biden and campaigning for him in Arizona.)

Republican losses in Maricopa County send a message to the rest of the country, Avila says: You can’t win elections by vilifying immigrants anymore.

Luis Avila, the founder of Instituto, a capacity-building organization for communities of color in Arizona, notes that this work built on the political infrastructure constructed over the last decade by Black and Brown organizers who grew up in the communities they were registering to vote. Avila says that the 2020 results in Maricopa also couldn’t have happened without huge turnout from Native Americans, who overwhelmingly supported Biden, and an increasing share of suburban women turned off by Trump’s messaging. “I actually think this election was won by women, women of color, and in particular, Latinas in Arizona,” he says.

But as Avila, Gutierrez, and representatives from multiple grassroots organizations have pointed out, the Democratic Party has often taken Latinx voters for granted, reaching out only when their votes are needed in an election cycle. “I understand that frustration, and I think that that’s one of the huge lessons we have to learn: to not just talk to these communities when we need their vote, but also really make sure that we’re there in off-election years,” Martinez says. “I can only speak for Maricopa County, but here we have intentionally tried to break that cycle”—by investing in the development of community leaders and also by leaning on local grassroots organizations so the Democrats can keep up the momentum.

That ground-up approach is something that I have heard a lot in my reporting in Arizona this election cycle. The work that organizers did with their neighbors, their local schools and churches, and their own family members started as an attempt to protect their communities. It focused on voting for candidates and propositions that would empower their families and provide adequate access to health care, education, and economic opportunities.

“I think that that’s one of the huge lessons we have to learn: to not just talk to these communities when we need their vote.”

Despite all that, the race was still close. The more than 900,000 people in Maricopa who voted for Trump are part of the 1.6 million statewide who wanted four more years of Trump. And that’s why 76-year-old Alfredo Gutierrez, a former state lawmaker and longtime public servant, is walking the line between celebrating and focusing on the work ahead. “The Trump support is much greater than the polls indicated, it’s much more powerful, and it isn’t going away,” he says. “Just like it was real when we went to segregated schools in the ’50s, it didn’t go away. It manifested itself again and again over time.”

In 1968, Gutierrez organized one of the first voter registration drives for the Latinx community in Maricopa and Tucson. He has seen the many fights that Latinos and Democrats in Arizona have won and lost for decades, and he’s overjoyed at seeing the work that helped flip the state this year. But, he cautions, it is one more incremental move forward, with many more to come.

“Back then we were organizing Mexican voting registration drives. We weren’t Latino; we were Mexicans. We’ve since become Mexicans of American descent, Hispanics, then Latinos, and we’re moving toward Latinx. But in ’68, we’re just plain-ass Mexicans,” Gutierrez says. “We were organizing and although we didn’t get very far, we kept on going. We inspired all these kids today. They are direct descendants—if you will, ideological descendants—of the folks who were there in ’68.”

Watching Maricopa go for Biden and Kelly “felt like this word in Spanish, escalofrío, which is a sort of mixed dual reaction,” he says. “On the one hand I’m really impressed with the work of local organizations like LUCHA, Mi Familia Vota, Poder, and Puente. These folks were extraordinary. But on the other hand there wasn’t a blue wave.”

And Democrats shouldn’t get lulled into a false sense of security now that Arizona has gone blue for the first time since 1996.

“I think people want to find a silver bullet for how a state like Arizona is now considered a purple state or a blue state, and I think people miss the story when they’re only focusing on Biden,” Avila says. “Did Biden win Arizona? No, we won Arizona, our community won it, because we wanted something different from Trump.”