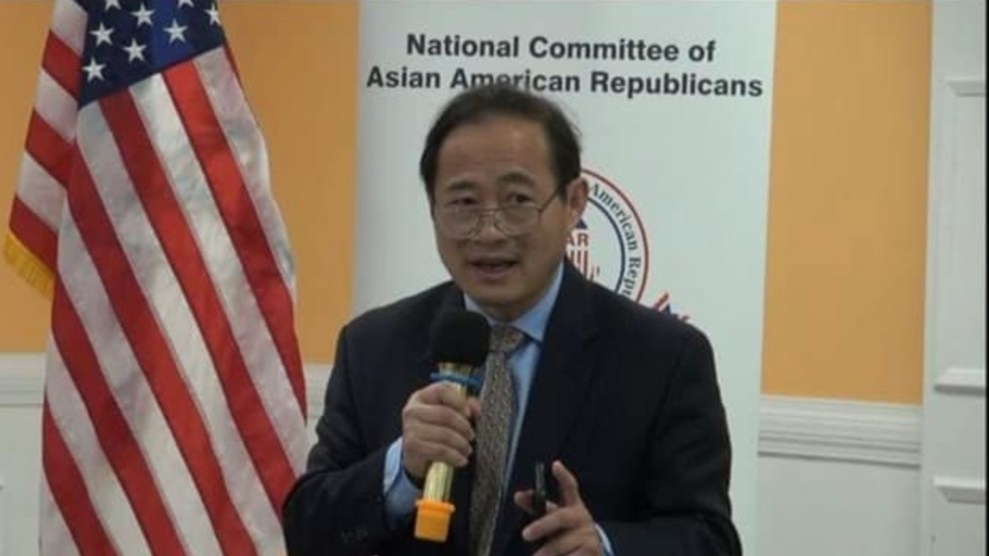 Cliff Zhonggang Li, who heads an organization called the National Committee of Asian American Republicans, has switched his political allegiances right before the election, endorsing Joe Biden in an October 30 press release. “When the President openly calls Proud Boys, categorized by the FBI as an extremist group, to stand by, it reminds us of the Red Guards during the Cultural Revolution, when the Dictator called on his supporters to oppress all different political voices as unpatriotic,” Li wrote in the release.

This stance, Li, says, has drawn an immediate backlash: A cease and desist letter from the Republican National Committee demanding that Li stop using a logo that resembles its own, and an article in the right-leaning RedState that quotes a former RNC member who says Li is a Chinese agent.

Li said the allegations about his ties to the Chinese government are completely false, a smear retaliating for his backing Biden. “This is the dirty politics in its extreme combining McCarthyism and presidential politics,” he said. “It will also put fear in Chinese Americans who dare to make a political statement against a political leader, which is too familiar to many Chinese American immigrants with the prior experience.”

“This is the dirty politics in its extreme combining McCarthyism and presidential politics.”

Though the group is small, Li says around 70,000 Chinese Americans have attended its events over the last five years, and as one of relatively few minority organizations backing Trump in 2016, it status in Republican circles was elevated. (The organization previously included Cindy Yang, a Chinese American former massage parlor owner whose efforts to sell access to Trump at Mar-a-Lago Mother Jones reported on.)

Li’s endorsement drew news coverage from the Hill and Yahoo News. Andrew Yang tweeted it to his 1.7 million followers.

Li asserts that the RedState article is retaliation. The story notes that Li worked with a RNC Committee member, Dr. Helen Van Etten, who was raised in Taiwan, to build a website and social media for an RNC backed organization called the Asian Pacific Islander Conservative Council. According to RedState, Van Etten said that Li told her he had visited the offices of the United Front Work Department, a Beijing-based agency of China’s Communist Party accused of working to project Chinese government influence. According to the article, Van Etten says that Li told her had to work with the organization “because he still has his business in China.” The article also cites an allegation by Van Etten that Li is a “Chinese asset and that at least one of his goals was to penetrate the RNC.”

Li says this is completely false. Li runs a Fort Lauderdale-based software business that he says requires occasional travel to China. But he says he “has never been to the United Front” and has “never talked to anyone at the United Front.” He told Mother Jones he never discussed alleged visits to the group’s offices with Van Ettan, let alone admitted visits. “This is ridiculous,” he said. Van Etten did not respond multiple inquires on Tuesday.

In a November 1 cease and desist letter to Li, RNC Chief Counsel J. Justin Riemer indicated that the committee is acting against Li in part due to his endorsing Biden. “Your unauthorized use is deceptive and is likely to lead individuals to believe that the RNC has authorized, sponsored, approved, endorsed, or provided financial support to you or the above-listed groups, which it emphatically has not,” Riemer writes. “This is especially troubling, given that you appear to be actively working against the RNC’s interests. While falsely purporting to represent Asian-American Republicans, as well as soliciting funds, your website endorses Joe Biden’s candidacy for President.”

Li said he has used the same logo for more than four years without any prior complaint from the RNC. An RNC spokesperson did not respond to a request for comment.