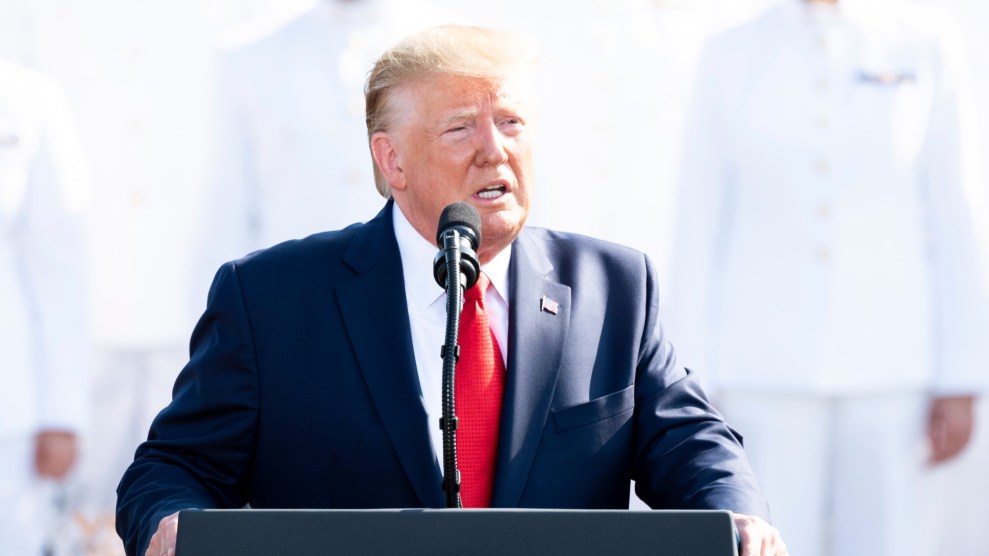 Six days ago, chief Pentagon spokesperson Jonathan Hoffman took to Twitter to shoot down an NBC story claiming that Defense Secretary Mark Esper had prepared a letter of resignation. “He continues to serve the nation as the Secretary of Defense at the pleasure of the President,” Hoffman tweeted. By the next week, it was clear how fleeting it is for any national security official in the Trump era to serve “at the pleasure of the President.”

President Trump tweeted on Monday that “Esper has been terminated” and announced that Christopher Miller, the director of the National Counterterrorism Center, would replace him. While Miller still commands respect from his former colleagues in the military and government—one of whom told veteran intelligence reporter Jeff Stein that he would be no “yes man”—the rest of the Pentagon’s senior leadership now looks much friendlier to Trump.

Policy chief James Anderson, intelligence head Joseph Kernan, and Esper’s chief of staff Jen Stewart are all gone, replaced by true believers with a history of echoing Trump’s most conspiratorial views on Russian election interference and the Deep State. The sudden nature of the departures was reflected in a terse Pentagon statement, which said Kernan’s exit had been “planned for several months,” but said nothing of Anderson or Stewart’s reasons for resigning.

In a typical administration, new Pentagon policy chief Anthony Tata would not have sniffed a senior Defense role. A former Army brigadier general who retired following an investigation into his extramarital affairs, he’s become a perennial Fox News guest with a fiery Twitter feed, whose best hits include calling for former CIA director John Brennan to be arrested, urging Trump to oust the “Deep State Cabal,” and referring to Islam as the “most oppressive violent religion I know of.” Trump initially nominated him for the same policy job over the summer, but after his most inflammatory statements were dug up by CNN, his nomination was withdrawn.

“Anthony Tata is patently unqualified to helm the Pentagon’s policy shop. He’s a segregationist who is hostile to women, people of color and Muslims,” Muslim Advocates public advocacy director Scott Simpson said in a statement after Tata’s new role had been reported. “That’s why his own party refused to confirm him. Every day that he serves as undersecretary of Defense is a day where all Americans are in danger. President-elect Biden must remove him as soon as possible.”

His untimely rise to one of the Pentagon’s top roles is yet another reminder of how hollowed out the department’s civilian leadership has become under Trump. After he was denied the top policy job, Tata was installed as the No. 2 policy official. Once Anderson resigned, Tata assumed the duties of the top role, giving him wide latitude “to demand more resignations across the department,” Foreign Policy reported.

Joining him in the senior ranks are new chief of staff Kash Patel, a former aide to Rep. Devin Nunes (R-Calif.), and intelligence head Ezra Cohen-Watnick, a National Security Council official whose role funneling top-secret documents about government surveillance to Nunes sparked an ethics investigation. As chair of the House Intelligence Committee, Nunes became the main congressional cheerleader against the so-called Deep State and a key cog in Trump’s effort to delegitimize the intelligence community’s conclusion that Russia interfered in the 2016 election on his behalf. At the National Security Agency, which is part of the Defense Department, another former Nunes aide, Michael Ellis, was named general counsel.

“This is the Night of the Long Knives, but it’s not about policy. It’s about loyalty,” Gordon Adams, a former Clinton White House official who has written extensively about the interplay between the Pentagon, White House, and Congress, told me. “This is the community that has been disloyal—the national security one.”

Since his election in 2016, Trump has compared intelligence officers to Nazis and mockingly instructed them to “go back to school” when they delivered testimony to Congress that contradicted his worldview. He’s also taken direct steps to have loyalists placed atop the vast intelligence community, installing Richard Grenell and Rep. John Ratcliffe (R-Texas)—both outward Trump supporters—as director of national intelligence and firing FBI Director James Comey, who initially approved the investigation into the Trump campaign’s ties to Russia. When Trump’s presidency has seemed most vulnerable, either during the run-up to Robert Mueller’s appointment as special counsel, or his impeachment last year, it’s been national security officials who have often provided the most damning testimony.

“He wants a national security community that’s willing to kiss his ass and do what he tells them to do,” Adams said.

Less clear right now is what exactly Trump wants these officials to do, if anything at all. Alex Ward at Vox reported Wednesday that the personnel changes could precede a troop withdrawal from Afghanistan. The White House has long leaned on the Pentagon to remove troops more quickly from Afghanistan, but Esper and Gen. Mark Milley, chairman of the Joint Chiefs of Staff, have been reluctant to meet Trump’s timeline. If Trump is still intent on getting all US troops out of Afghanistan before the end of the year, he might just have the people in place to pull it off. Will Ruger, Trump’s nominee as ambassador to Afghanistan, has publicly supported a rapid withdrawal and, on Wednesday, retired Army Col. Douglas Macgregor joined the Pentagon as an adviser to Miller, adding another prominent pro-withdrawal voice to the mix.

Even if no substantial policies come to pass from this brief interregnum, Trump’s new appointees have achieved much by their mere presence. Other Pentagon employees now know the price of stepping out of line, even this close to a future Joe Biden administration.