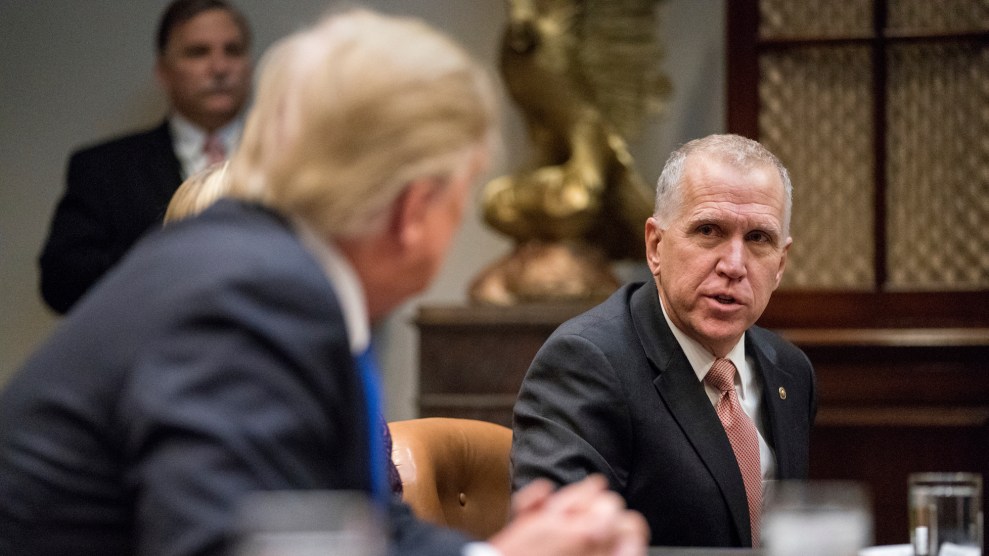 Amid fading Democratic hopes of retaking the Senate, Thom Tillis (R-N.C.) appears likely to eke out a victory over Democratic challenger Cal Cunningham in the most expensive race in the upper chamber’s history. Campaigns and outside groups spent more than $287 million on the race. As of Thursday afternoon, with 94 percent of estimated votes counted, Tillis had tallied 48.7 percent of the votes, versus 46.9 percent for Cunningham.

No major news organization has called the race, and final results won’t likely be announced until next week, as absentee ballots post-marked by Nov. 3 are still streaming in. But Tillis’ lead appears to be commanding, and the Raleigh-based News & Observer referred to him as the “apparent” winner on Nov.4.

It was the most expensive race in the upper chamber’s history.

If Tillis ends up the victor, the Democrats will face an Everest-scale climb to Senate control. Assuming Joe Biden wins the presidency, 50 seats will count as an effective majority, because Vice President Kamala Harris would hold the tie-breaking vote. Democratic candidates would have to win both the remaining toss-up races, both in Georgia. In that state’s special election for a Senate seat, Republican Sen. Kelly Loeffler and Democrat Raphael Warnock will square off in a runoff election scheduled for Jan 5, after neither candidate reached the 50 percent threshold required for outright victory. In the other Georgia Senate race, Sen. David Perdue is leading challenger Jon Ossoff, but will be forced into a runoff if Perdue’s vote share ends up dipping below 50 percent. On the afternoon of Nov. 5, that scenario looked likely.

Tillis’ victory, if it materializes, will count as an upset. Cunningham had been the clear favorite in the race since August, according to analysis of polls by the political-forecasting site FiveThirtyEight. He maintained his lead through a tumultuous month of October, when both campaigns experienced convulsions.

On Oct. 2, a day after Tillis publicly debated Cunningham in person, news broke that Tillis had tested positive for COVID-19. He had attended two of the White House “super-spreader” events, on Sept. 26, to celebrate President Donald Trump’s nomination of Amy Coney Barrett to the Supreme Court. In a New York Times investigation of the fiasco, Tillis appeared in a photo chatting side-by-side with a child, unmasked and indoors. Less than a month earlier, Tillis had made headlines for criticizing Latinos for not taking the pandemic seriously enough.

Also on Oct 2, Cunningham, a married father of two who often touts his status as a family man, was plunged into a scandal over an extra-marital affair, after the right-wing web site National File published the candidate’s private text messages. “I have hurt my family, disappointed my friends, and am deeply sorry,” Cunningham said in a statement to Raleigh News & Observer. “The first step in repairing those relationships is taking complete responsibility, which I do. I ask that my family’s privacy be respected in this personal matter.”

The scandal transformed the campaign on the ground.

But the scandal transformed the campaign on the ground. While Cunningham laid low, avoiding questions about his romantic misadventure, Tillis barnstormed the state, “flanked by a roster of big-name GOP surrogates: Vice President Mike Pence, Texas Sen. Ted Cruz and former Ambassador to the United Nations Nikki Haley,” Politico reported on Nov. 1. The publication added: “The incumbent senator is joining President Donald Trump at multiple rallies in the state.” The strategy appears to have worked. According to North Carolina Board of Elections data, as of Nov. 5, Tillis was leading Cunningham by less than 100,000 votes overall. But the incumbent got a huge boost from ballots cast on election day, when Tillis received 545,755 votes, vs. 283,125 for Cunningham. That 262,630-vote difference on the election’s last day appears to have pushed Tillis to victory.

A veteran of the Iraq and Afghan wars, Cunningham entered the campaign with the backing of the Democratic Senatorial Campaign Committee. He has served in the North Carolina state senate and worked as a lawyer and an executive at a waste-disposal firm. He opposed Medicare for All, but vowed to defend the Affordable Care Act and supported a public health insurance option. He also declined to support Green New Deal, but did come out for “significant federal investment aimed at creating jobs and slashing carbon emissions in half by 2030 and to net zero by 2050,” as well as a US return to the Paris Climate Accords, reports Inside Climate News.

Tillis showed an early tendency to criticize Trump; he initially pushed back against the president’s zeal for building a border wall, for example. But he holds many traditional conservative Republican positions: He opposes abortion, same-sex marriage, the Affordable Care Act, and aid to poor people. He has waffled on the reality of climate change, and opposes concerted action to ramp down fossil fuel use. And by the end of 2019, when Tillis had emerged as a fierce defender of the president during the impeachment trial, Politico saw fit to declare Tillis “Trump’s new best friend.” He may be Senate majority leader Mitch McConnell’s now, too.