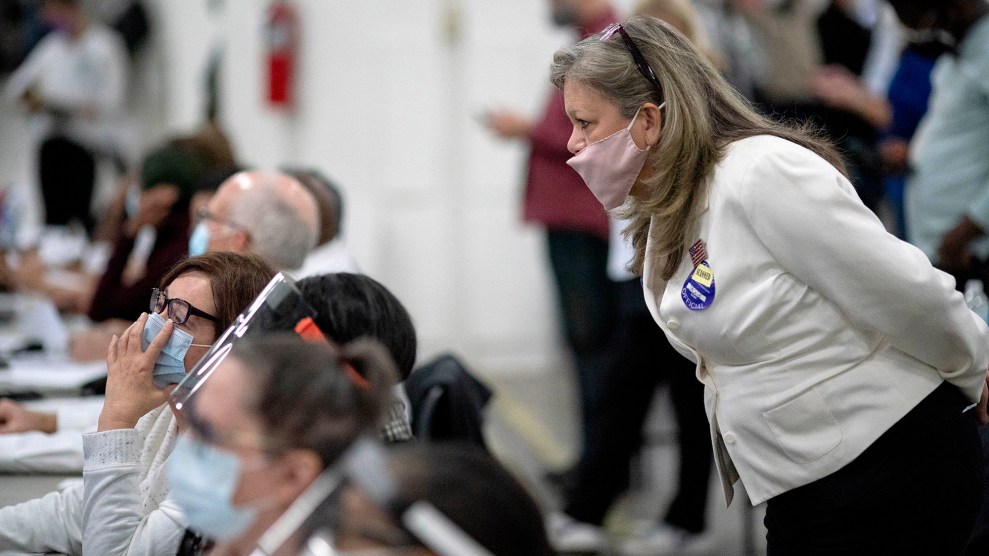 The claims underlying the suit, which lack any substantial evidence and echo ones already made in a state lawsuit by a local conservative legal group, were amplified at a Monday press conference in Washington by White House Spokesperson Kayleigh McEnnany and Republican National Chairwoman Ronna McDaniel, a Michigan native.

Trump’s team says the lawsuits are ultimately are focused on one thing: flipping the results.

The suit, which demands that some of the city’s reported votes not be included in the state’s final tally, is just part of the campaign’s nationwide legal and political strategy focused on states where Trump has received fewer votes than Biden. The president hopes to hold on to the White House through lawsuits that seek to disqualify hundreds of thousands of voters and that create delays that prevent his loss being formalized. Election officials in every state from both parties told the New York Times this week that they have seen no evidence of widespread voter fraud in the 2020 election.

Trump allies, and even the president himself, privately concede the suits have very little chance of swinging the election. Publicly, however, Trump’s campaign is making no such admission. Tim Murtaugh, the Trump campaign’s communications director, told reporters Tuesday night that the various legal actions will gather more information, but ultimately are focused on one thing: flipping the results.

“Every filing and every action that we are taking are getting us closer to the goal of seeing the president reelected,” Murtaugh said. “We do believe that ultimately President Trump will be declared the winner.”

In Michigan, the latest counts show that Biden earned nearly 150,000 more votes than Trump. Rudy Giuliani, the president’s personal lawyer, has claimed their federal suit will invalidate “hundreds of thousands” of the state’s votes.

The suit claims that Wayne County election officials and Secretary of State Jocelyn Benson, a Democrat, failed to give Republican poll challengers proper opportunity to observe ballot tabulation, allowed county election workers to intimidate the ballot challengers, and let “illegal and ineligible ballots” to be counted. The federal lawsuit also claims that isolated software glitches causing incorrect reporting of results—an issue already caught and corrected, according to local and state election officials—have not been properly addressed and need further review.

Trump’s campaign has asked a judge in Michigan’s western federal district court to delay certification of the state’s results until all ballots have been confirmed to be eligible, and to discard ballots that the campaign says may be among them that were unlawfully cast, including some purportedly received after Election Day. The suit also seeks to toss out legal votes counted using the software in question unless individual tabulation devices are checked for accuracy, alongside those counted at times the campaign alleges Republican poll viewers were denied proper access.

The filing includes statements from Republican ballot changers who claim they were threatened by elections staff and saw issues with the count they couldn’t explain, like ballots being scanned more than once or supposed back-dating of ballots. Other observations are less substantial: one statement noted that a tranche of military ballots contained votes for Biden.

The campaign asked a judge to toss out legal votes and delay certification of Michigan’s results.

References to race are scattered throughout the statements, such as a woman who wrote she “did not feel safe (I am a small (5’3″ 130lb) pregnant white woman).” Another claimed “intimidation by poll workers wearing [Black Lives Matter] face masks and another man of intimidating size with a BLM shirt on.”

Jake Rollow, a spokesperson for secretary of state Benson, said the new lawsuit is “the same kind of irresponsible false rhetoric and misinformation that we saw throughout the election [and] is a press release masquerading as a legal claim designed to promote false claims aimed at eroding the public’s confidence in Michigan elections.” Elections in Michigan “were conducted fairly, securely, transparently, and the results are an accurate reflection of the will of the people,” Rollow said.

The city of Detroit and its election commission, in a response filed Wednesday in the state level suit filed by a conservative legal group, called the allegations “one more in a series of ill-conceived cases filed in an attempt to overturn the results of the presidential election” that relies on “hearsay, speculation and unfounded conspiracy theories” to overturn results simply because Trump didn’t win.

Most of the objections raised, the filing read, “are grounded in an extraordinary failure to understand how elections function.” The city’s lawyers said basic procedures around the election are much the same as they were in 2016, when Trump won in Michigan by less than 11,000 votes. Trump actually improved his showing in Detroit by nearly 6,000 votes over 2016, the filing notes, while Biden’s final unofficial tally was less than Hillary Clinton’s showing in 2016: “Nothing about those numbers supports the theory of fraud being advanced [or] the completely unsubstantiated claims of tens of thousands of improperly processed ballots.”

Ray Wert, a county-level Democratic Party official, was a credentialed Democratic ballot challenger on election night and into the next day at Detroit’s TCF Center, where the bulk of the Trump campaign’s witnesses were on hand.

Wert, who has served as a ballot challenger in three previous elections, says he’d grown to recognize the Republicans who typically work alongside him. This election, he says there were many first timers, who were “poorly trained, ignorant of the process, ignorant of the law, and ignorant of the rules around challenging ballots. And that’s on the GOP.”

Trump’s legal filing comes days after Republicans in Michigan’s legislature announced they would subpoena state election officials as part of an investigation into election irregularities in order to “provide needed clarity to concerned residents.” Also this week, Attorney General Bill Barr advised federal prosecutors around the country that they could pursue “apparently-credible” or “substantial allegations of voting and vote tabulation irregularities” that “could potentially impact the outcome of a federal election in an individual State.” The memo caused deep concern within the Department of Justice, the Washington Post reported Tuesday, leading its top election crimes official to resign and move elsewhere in the department.

“That would be—no joke, no hyperbole—the most profoundly anti-democratic act of modern American history.”

Michigan Attorney General Dana Nessel said Barr’s move wasn’t to benefit voters, but was designed to “signal to the President that his irresponsible and unsupported insistence that he won his race for reelection is taken seriously.” On Wednesday, Nessel assailed Trump for carrying out a racist strategy, targeting Black voters and officials in Detroit over other places in the state that are majority white and where Biden did better than Clinton did in 2016, like Oakland and Kent counties. “Really, the themes that we see, that persist, are this: Black people are corrupt, Black people are incompetent and Black people can’t be trusted,” she said, according to the Detroit Free Press.

Sam Bagenstos, a law professor at the University of Michigan and a former official in Obama’s Department of Justice, said Tuesday that Barr’s memo seems to be carefully worded to limit federal involvement to instances where the claims have merit and have a chance of effecting the election outcome, which is unlikely in Michigan, given counts so far show Biden won nearly 150,000 more votes. “To that extent, maybe it’s just a CYA kind of memo for his boss.”

Bagenstos said the legal maneuvering and false claims flying in Michigan and other closely decided states like Pennsylvania may fuel fears of Republicans state legislatures stepping in to supplant the will of voters by appointing Trump-supporting electors. He doesn’t think that outcome is likely, given the low caliber of Trump’s legal challenges thus far and the fact that Biden clearly won more support.

“Never underestimate anything these days, but that’s a step way beyond anywhere anyone has been willing to go so far,” he said. “If they were to do this with the gap so large in so many states, that would be—no joke, no hyperbole—the most profoundly anti-democratic act of modern American history. That would be saying they’re just abandoning a pretense that we are a democracy where the people choose our president. Do you really think they’re going to do that?”