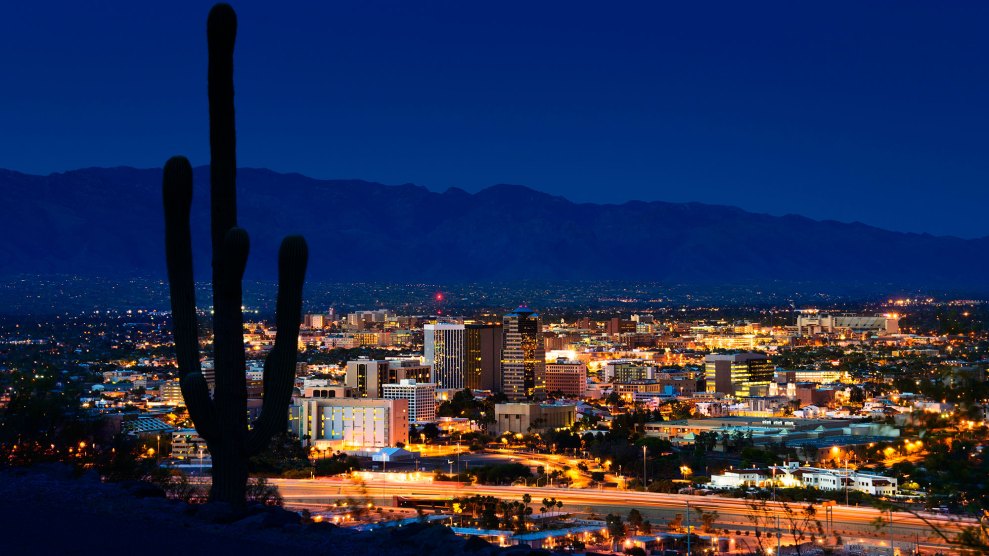 After a recent, massive spike in coronavirus cases slammed local hospitals, Tucson, Arizona, became the latest city to implement a COVID-19-related curfew. The curfew, which goes into effect Friday evening and will run every night through December 23, does not apply to essential workers, first-responders, health care workers, or homeless people, and it exempts those traveling to or from essential services. Anyone in violation of the curfew could be given a civil citation and fined.

In choosing to roll up its streets at night to combat the coronavirus, Tucson joins a group of cities that includes El Paso, Denver, and Columbus. But these efforts don’t compare to the stay-at-home orders from the beginning of the pandemic; Tucson, for example, won’t be closing non-essential businesses during non-curfew hours. So can these limited curfews work to slow the spread of COVID-19?

The short answer, according to the experts I spoke with this week, is not really—unless it’s paired with other changes to indoor activities and public gatherings. “There’s no reason to think—from the virus’ point of view, so to speak—that changing the times that people are able to congregate in public spaces would really matter at all,” said Dr. Angela Rasmussen, virologist at the Georgetown Center for Global Health Science and Security. “Curfews are a really limited value if you’re going to keep those businesses open in an unrestricted way the rest of the day, because the virus isn’t nocturnal.”

“There’s no reason to think…that changing the times that people are able to congregate in public spaces would really matter at all.”

Back at the beginning of the pandemic, many cities and states implemented curfews to flatten the curve, and they did work to dramatically decrease community transmission. But things looked significantly different then—everything was shut down. Rasmussen said that the United States’ public health response has been “so distorted and such a huge failure” that we’re stuck with half measures that may or may not work. This second round of curfews isn’t the equivalent of a lockdown, she said, and isn’t going to have the same effect as the lockdowns of the spring.

Epidemiologist Saskia Popescu, an assistant professor at the Biodefense Program at George Mason University, is concerned that curfews “could condense people interacting or convening at businesses” earlier in the day, rather than have fewer people go to bars or movie theaters. She noted that while there have been a number of studies exploring curfews’ effects on behavior, little research has been done on their impact on infectious disease transmission. A study published in Nature showed that curfews and lockdowns work when cities are also “closing and restricting places where people gather in smaller or large numbers for an extended period of time,” without having to go into a full national lockdown. “Ultimately, the goal of a curfew is to minimize at-risk behavior,” Popescu said. “The better focus would be to limit large indoor gathering.”

That’s not happening right now in Arizona, where I live. For the last few months, the state has embraced Gov. Doug Ducey’s open-it-up attitude: Movie theaters can fill to 50 percent capacity, indoor gyms are operating at 25 percent capacity, and bars can be open so long as they “transformed to operate as restaurants.” Even arcades and bowling alleys are open here. Perhaps it’s no surprise that while restaurants are supposed to be operating at half capacity, I’ve seen numerous dining rooms packed with maskless diners as I’ve gone to pick up takeout orders.

Meanwhile, Arizona’s COVID-19 infections have been steadily increasing since November, and the number of patients hospitalized is almost as high as it was in the summer surge, when the state was a national hot spot. Just in the last two weeks, the statewide daily average hit 4,300 new cases, a 70 percent increase from the previous two weeks. The Arizona Department of Health reported that November 23 had the highest daily rate yet, with 5,630 confirmed cases in a 24-hour period, surpassing Arizona’s peak in June. Earlier this week, health care leaders in Arizona wrote a letter urging the health department to immediately issue a statewide shelter-in-place order, end all indoor dining, and close athletic activities for at least a month to avoid full crisis mode.

On Wednesday, Gov. Doug Ducey held a press conference thanking Arizonans for being “so responsible” over the Thanksgiving weekend, even though his own state health department reported a spike after the holiday weekend

On Wednesday, Ducey held a press conference thanking Arizonans for being “so responsible” over the Thanksgiving weekend, even though his own state health department reported a spike after the holiday weekend. He recognized that the numbers in Arizona were headed in the wrong direction but still held back from issuing a statewide mask mandate or addressing the recommendations from the health care leaders. Ducey made no changes to indoor public spaces, where people don’t wear masks when they’re eating and drinking, but added $1 million for restaurants to set up more outdoor dining areas to take advantage of the state’s mild winter weather. And in a grim admission of where things are heading, Ducey also signed an executive order that adds $60 million for local hospitals so they can hire an additional 500 nurses through the end of the month.

Regina Romero, Tucson’s Democratic mayor, said it would be “much better” for Ducey to have taken broader measures, but the city’s curfew is an initial step “in the absence of clear direction or immediate action from the governor.”  (Romero has been unsuccessfully pushing the governor to establish a statewide mask mandate for months; in his Wednesday press conference, Ducey said he disagreed with Tucson’s curfew and didn’t think it was the “right approach,” and that Arizona should instead keep enforcing the same rules that have been in place for the last few months.) “Any step we take,” Romero said, “is much better than not doing anything.”

Research, however, suggests otherwise. For example, curfews end up disproportionately affecting people of color, who are both more likely to be stopped by police and who often have worse outcomes following interactions with cops. Undocumented essential workers are more likely to end up detained over their immigration status, even if their jobs fell under the exempted categories. “Even if there’s no criminal penalty for violating curfew, if there’s any kind of civil penalty, that can really cause a lot of financial harm to people as well,” Rasmussen said. “So I think that curfews do potentially more harm than good.”

“I think that curfews do potentially more harm than good.”

But with Republican governors around the country continuing to shrug their shoulders at skyrocketing infection rates, we may continue seeing more municipalities turn to curfews to mitigate COVID’s toll—and more tortured city council discussions about the details of those curfews. On Tuesday night in Tucson, much of the city council’s debate revolved around what time the curfew should start—8, 9, 10 p.m.? Romero, the mayor, had proposed an 8 p.m. curfew earlier in the week on the recommendation of local hospital CEOs. But when the medical leaders were asked to justify that starting time, the best they could do was point to another Nature article that suggested 8 o’clock.

And so the conversation continued on, with council members arguing over the potential economic blow to bars and restaurants depending on what hour the curfew went into effect. One of the council members even said that 10 was better than 9 because “Roadhouse Cinemas doesn’t get out until 9:30,” referring to a local dine-in movie theater. The city settled on a 10 p.m to 5 a.m. curfew but is likely to push it up an hour to 9 p.m. once the Pima County Board of Supervisors implements a countywide mandatory curfew that’s expected to start at 9.

“You don’t want to have a stay-home order forever,” Rasmussen said. “You want to have it for long enough that you can get community transmission down to a level where it’s actually feasible to test people and to then contact-trace. That’s how you break these chains of community transmission. We didn’t do that. And that’s why cases have gone back up. It’s not because the first lockdown didn’t work. It’s because we didn’t really put the measures we needed to in place to make sure we didn’t have to have a stay-home order again.”