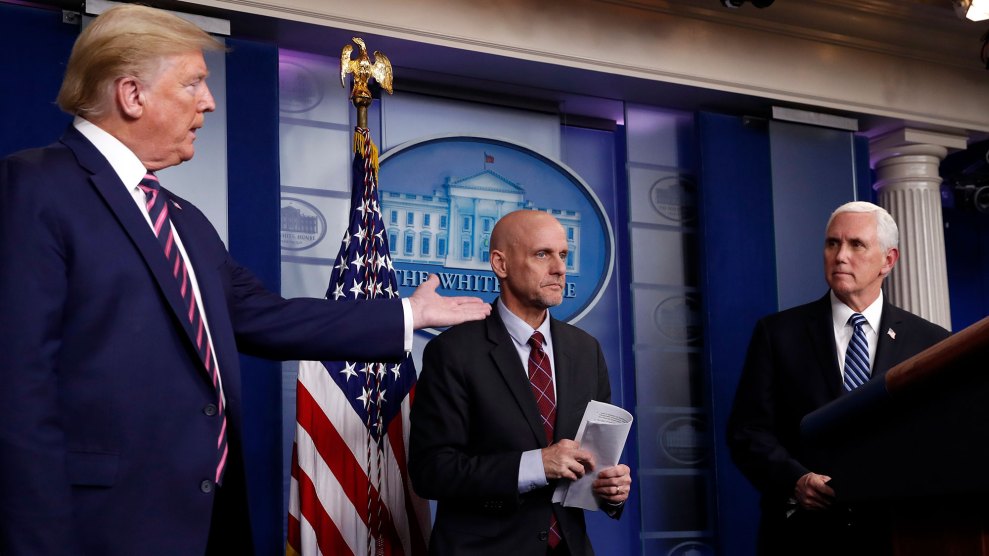 April 24, 2020, President Donald Trump gestures to Vice President Mike Pence as Dr. Stephen Hahn, commissioner of the U.S. Food and Drug Administration, steps back to the podium to answer a question during a briefing about the coronavirus.AP Photo/Alex Brandon

FDA commissioner Stephen Hahn is pushing back against claims by the Trump administration that his agency slowed down the COVID-19 vaccine approval. Hahn said Sunday morning that there were “no external pressures other than the science” when it came to the rollout of the vaccine.

Hahn was responding to a tweet from President Trump that suggested the FDA could have greenlit the Pfizer vaccine sooner than Friday, but instead was “playing games.”

While my pushing the money drenched but heavily bureaucratic @US_FDA saved five years in the approval of NUMEROUS great new vaccines, it is still a big, old, slow turtle. Get the dam vaccines out NOW, Dr. Hahn @SteveFDA. Stop playing games and start saving lives!!!

The Washington Post reported that White House Chief of Staff Mark Meadows told Hahn on Friday “to be prepared to submit his resignation if the agency did not clear the vaccine by day’s end.” Hahn went on the Sunday morning news shows and said Meadows didn’t threaten to fire him. Meadows did call him, Hahn said, but he would not discuss the content of that private conversation.

“Of course we’ve been asked to speed up this process as much as possible,” Hahn said on ABC News This Week. “We do not feel that this could’ve been out a week earlier.” Hahn said the FDA “promised the American people we would do a thorough review of the application,” and that’s what they did.

NEW: "We do not feel that this could have been out a week earlier," FDA chief Stephen Hahn tells @MarthaRaddatz when asked about President Trump's claim that the COVID-19 vaccine could have been approved earlier. https://t.co/kEzanF2Ysi pic.twitter.com/cAtcDjWuVv

The lead scientist for the White House Operation Warp Speed said Trump’s claims were not helpful for building public trust in the much anticipated vaccine. Moncef Slaoui said that if the Meadows call to Hahn happened, “I think it was useless and unfortunate, so are some of the tweets.”

The back and forth between Hahn and the White House is happening as the first trucks full of COVID-19 vaccines left a manufacturing facility Sunday, marking the start of the biggest vaccine distribution effort in US history.