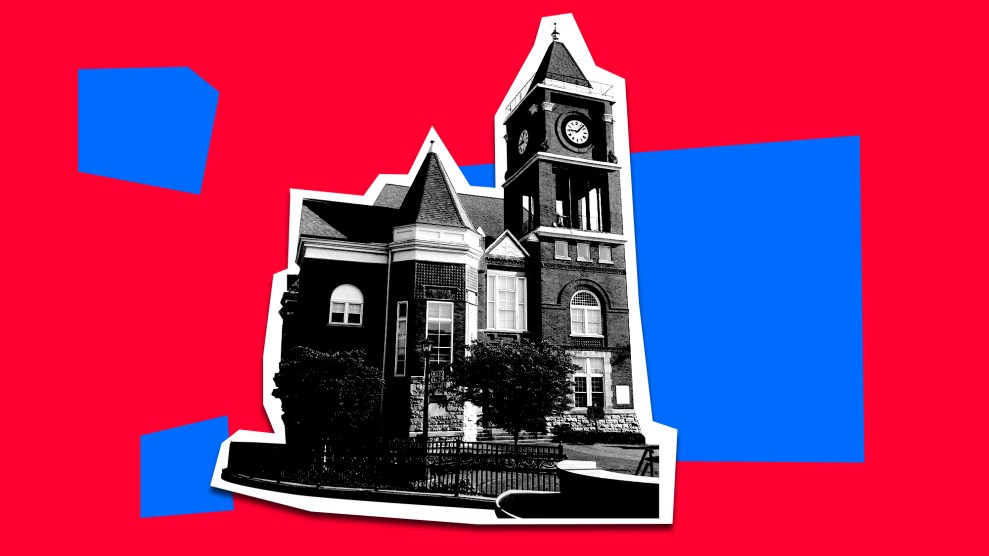 Andrea Baerwalde is the interim chair of the Democrats of Paulding County, Georgia, a subdivision-filled exurb about an hour northwest of Atlanta. Baerwalde and the other Democrats in the group often feel out of place in the Republican stronghold where they live. The county made national news earlier this year when a student at a local high school was suspended for snapping a photo of a hallway crowded with maskless students.

Like much of the rest of Georgia, though, Paulding County is becoming bluer, This year, about 35 percent of its 168,000 residents voted for Joe Biden, while in 2016, just 28 percent voted for Hillary Clinton. Baerwalde is 61 and works as a speech and language pathologist for young children. Her husband is a physical therapist and a Trump supporter. We met on the patio of a Starbucks in Dallas, Georgia, not far from where she lives. I asked her about how Paulding County has changed, what it’s like to be married to a Trump supporter, and what Paulding County Democrats are doing as they get ready for the historic double Senate runoff on January 5.

On what Paulding County used to be like: We moved to Paulding County in 1994. We had lived in [neighboring] Cobb County, and we decided to build a house here because we could afford a bigger place. It was very rural, there was nothing except an old general store—that was actually beautiful, with these big oak trees—and they tore it down. Even to go grocery shopping, you had to drive 10 or 15 minutes.

I was working in the schools and special education in [nearby] Bartow County. I always assumed that people in education would be Democrats. But I found that the people I worked with were not Democrats. I thought that was weird, but it just wasn’t that big of a deal back then. When I first got married, my husband had been a Republican, but then he voted twice for Bill Clinton. Because he’s a physical therapist, and he was traveling, doing home health, he started listening to Rush Limbaugh [during his drives]. We would get into discussions around election time, but other than that it wasn’t that big of a deal.

I didn’t used to say much about the fact that I was a Democrat to people around here.

I didn’t used to say much about the fact that I was a Democrat to people around here. We moved into our new neighborhood in 2006. It just so happened that the person who lived next door was a Democrat, and people who lived behind me were Democrats. I’ve learned since then that there are a lot of Democrats—well, not a lot, but more than you would think.

On yard signs: In 2008 I had an Obama sign. I had never gotten a political sign before. Not ever. I was so excited. And I put it out. But my husband, who by this time was full on back to being a Republican, wouldn’t let me put it in front of our house. Next to our house, there’s a big depressed area, like a bowl, You can’t really tell that the property in front of that is ours, but it is. So he made me put my sign down there.

I put it up, not even a week before the election, and when I got home, it was gone. It turned out that my neighbor across the street, who I had never had any problems with, yanked it out of the ground and put it in the garbage because she didn’t like Barack Obama.

Before the 2016 election, I put out a Hillary Clinton sign. And again, I had to put it away from the house. It was a Sunday afternoon and I lay down to take a nap. When I woke up, like an hour later, it was gone.

On Black Lives Matter: This past June I had a Black Lives Matter sign out. My husband was not at all happy that I put it up. Then one night, we were all sitting at dinner, and somebody knocked at the door. We went out there, and somebody in our neighborhood stopped by to say that he really appreciated our sign. We went back in, and my husband was kind of grumbling. And my daughter said, “You see that? This is good. Look what we did. Look what that sign did for one person. So let’s keep it up.”

I can’t say that I’m totally without prejudice, because I know that I’m not. It really hits me the wrong way when people are like, “I’m not racist. I’m not prejudiced.” No, you probably are just a little bit if you just look inside. This summer, for the Black Lives Matter protests, we had a really cool car parade. It was really inspiring to see how long the car parade was. But what was really cool was to see people coming from the other direction and honking and waving.

We got 2,800 postcards out to Paulding County for the general election, which was amazing. This time, some people from Pennsylvania contacted us. It’s a group called Tinicum Together, and they’re from Bucks County. They have a group of women across the country sending out postcards. They wanted to know if Paulding County needed help, and we said yes! All said and done, I think we’ll have sent out about 10,000 postcards.

On the Republicans in her family: My 24-year-old son voted for Trump in 2016, but he didn’t tell me for a few years. This time he voted for [Libertarian candidate] Jo Jorgensen. But he’s supporting Warnock and Ossoff [the Democratic Senate candidates] in the runoff. I guess he just doesn’t like [Republican candidates] Purdue and Loeffler.

My two sons are very much about the Second Amendment and being able to own guns. They’re convinced that Biden would do something to take their guns away. My husband collects World War II guns, so they learned about guns from him. I used to go shooting before I met my husband, but I don’t think I need to go shooting now.

My husband has just bought into the rhetoric about how awful liberal people are. We have to not talk about a lot of these things. I think, as important as a woman’s right to choose is to me, people not being able to choose is important to him. Before the pandemic, we would go out to dinner and a movie. We go hiking sometimes. We like doing stuff to the house. But we’ve also become more entrenched in our sides. Sometimes it’s just really, really hard.

On campaigning before the upcoming double Senate runoff: I think Warnock and Ossoff do have a chance. I always worry, because I’m not used to Democrats who have a chance in Georgia. So I’m trying not to get ahead of myself.

I have 200 Warnock-Ossoff joint signs that somebody from up north is distributing all over Georgia. And after I leave here, I’m running to pick up some signs for [Georgia Public Service Commission candidate] Daniel Blackman.

In 2018, with Stacey Abrams campaign, we had a sign-waving event, and we got lots of people giving us the finger and booing. F-you Stacey, and all that. This time the response has been so much more positive. We had one sign waving event on highway 120, just over the Cobb County line that was almost all positive. It was a change from just two years before.

More people from other places have moved in here. Now people are saying, “I’m not going to sit, sit here and keep my mouth shut. I’m going to say I’m a Democrat, loud and proud and stand up for what we believe in.”