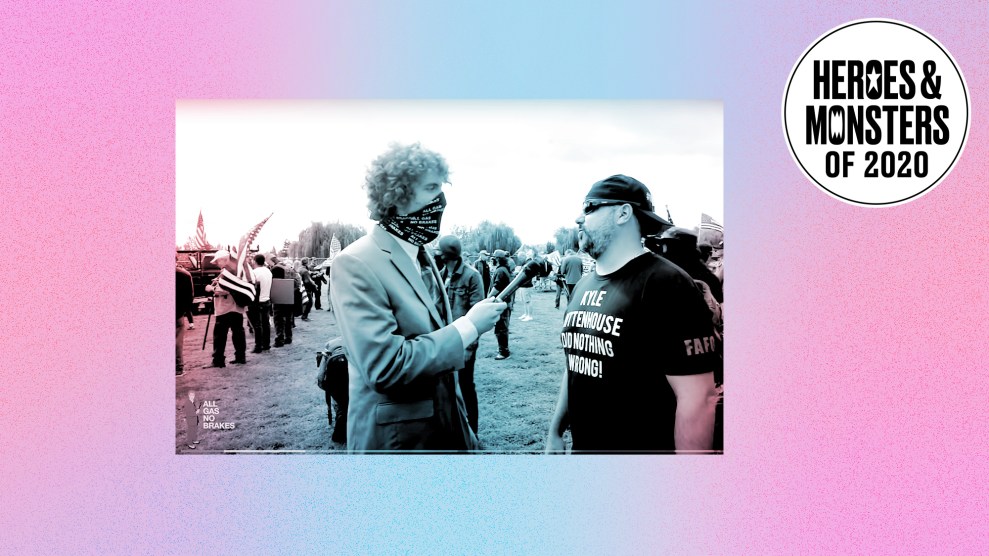 “Sunlight is the best disinfectant.” As an allegorical aphorism, it is almost never true.

Enabled by social media, conspiracists, white supremacists, and general hoax types have garnered more exposure—more “sunlight”—and their hate and ignorance has only gone viral and grown. What has slowed down toxic provocateurs like Alex Jones, Milo Yiannopoulos, Baked Alaska, and many others has been their removal from social media. That is a better disinfectant.

All Gas No Brakes documents the outermost threads in America’s extensive tapestry of subcultures.

It turns out giving hateful rhetoric airtime and a platform doesn’t repulse everyone. In many, cases it actually appeals to them. At scale, sunlight isn’t very helpful. But when administered by consummate deadpanner and budding gonzo journalist Andrew Callaghan, it’s not only effective—it’s very entertaining.

Callaghan created All Gas No Brakes, his YouTube channel, in 2019. Since then he’s been crossing the country in an RV stuffed with friends, documenting the outermost threads that make up America’s extensive tapestry of subcultures. In the past year or so, they’ve made it to FurFest, the Adult Video News Awards, and Talladega Superspeedway. As coronavirus ravaged the U.S. he didn’t slow down, throwing on a mask to get uncomfortably close to the bizarre underbelly of Americana.

Most of Callaghan’s videos are great. But his most important work has come from his forays into the far-right, where he’s just turned the camera on and mostly let them speak.

“I understand sometimes when the left is like ‘Ah well, [the Proud Boys] are violent!’ It’s ‘cause we make self-defense look like assault,” a shrugging Proud Boy leader, Enrique Tarrio, told Callaghan at a summer rally for the group, a neo-fascist organization that describes itself as “western chauvinist.” Its often violent members have managed to dodge the brutal tendencies of police, sometimes even getting chummy with them—something critics suspect is because the groups share discreet relationships, which reporting shows is at least sometimes true.

Some of Callaghan’s interview subjects that day similarly incriminated themselves explicitly—and, implicitly, the rest of the Proud Boys, by making it clear that there are some absolute dangerous weirdos in the group.

He lets a man dressed only in what looks like a black morph suit—except for his hunting-camo hat and wraparound sunglasses—make himself look even more and more buffoonish the longer the tape rolls, as he confidently prattles off the obscure conspiracy theories he believes. Another guy wearing a softball helmet and ski goggles while holding a massive Trump flag muses that Black Lives Matter maybe isn’t so bad, before he decides to cut the interview short after realizing what he just said out loud.

Callaghan then turns to a guy nearby who has an unspecified vendetta, as evinced by a sign he was holding, against George Soros. One can guess why, given the anti-Semitic roots of far-right attacks targeting the liberal philanthropist.

This is generally how Callaghan’s interviews go. Aside from some cuts to move things along and making Vic Berger-styled surrealist and goofy edits to underscore the absurdity of his subjects, Callaghan mostly just lets them hang themselves with their own rope. And, every time, they do. In almost every video, his patient but general questioning about why they believe what they do consistently reveals anti-Semitic thinking. These are the people he always finds, uncoincidentally, hanging around Proud Boys rallies, Flat Earth events, anti-coronavirus lockdown protests, and the like.

Extremists make jokes to disguise their racism. Callaghan makes journalism that elucidates their racism, disguised as a joke.

It’s really effective. The far-right groups of 2020, wittingly or not, are antecedents of the far-right internet culture of the mid-2010’s. Their vocabulary of terms—cuck, beta, redpill—came out of 4chan and Gamergate adjacent and affiliated Reddit communities. These were spaces where cruelty was disguised as irony. Being racist was a joke, a troll for the lulz. So ironically throwing up the white power sign to troll the libs in public, while privately identifying as a white supremacist segregationist, is just a slightly less online version of what 4chan trolls were doing in 2014. Callaghan meets them on their own terms. They make jokes to disguise their racism. Callaghan makes journalism that elucidates their racism, disguised as a joke.

Inevitably, journalists reporting on and outlets and publications running straight news stories about the far-right will always register, in some minds, on a frequency aside from irony or disgust. This often well-intentioned coverage will nonetheless prove attractive to swathes of the country, especially the irony-poisoned internet youth who Proud Boys and the like try so hard to convert. While sternly condemning neo-fascists in a crisp, expensive suit and ironed tie is something fancy people who wear fancy suit and ties should definitely keep doing, a self-serious broadcaster raising an eyebrow and saying that the alt-right is “racist” in a slightly raised baritone is never going to resonate with the extremely online. But with his rumpled clothes and flat affect, All Gas No Brakes has figured out how to out-irony the edgelords.

Callaghan himself isn’t just in it for the bit. His lampoons are laced with empathy for some of the subjects he’s critical of. In an interview with Twitch political personality Hasan Piker, Callaghan lamented how often anti-Jewish bigotry came up in his filming. “It’s unfortunate, because these are very curious, investigative people, who are willing to put in tons of independent research time—which most people aren’t down to do,” he explained, bemoaning that their interests and conspiracy thinking always “go back to the Jews every time.”

Given he’s handling such dark currents, Callaghan isn’t blithe about the limits of letting people speak completely freely in videos that will reach a big audience. (All Gas No Brakes videos have been watched 61 million times on YouTube alone, where the channel has 1.5 million subscribers.) He told Vice in an April interview that despite disseminating hours of candid conservations with some of the most unsavory people he can find, he’s still holding on to footage that he has ”refused to broadcast because doing so would directly give a platform to hate speech.” He told the news site that he once cut an interview short because an interviewee at a Flat Earth conference alluded to denying the holocaust.

In his video documenting the Proud Boys rally, Callaghan made sure to include clips from the event showing a student journalist who was shoved to the ground and kicked in the head by a Proud Boy, and of another who accused an independent journalist of bias since she was “Arab.” In highlighting moments like these, Callaghan’s All Gas No Brakes shows what it actually takes to make sunlight work as a disinfectant. In a year where hate, violence, and those who push them have been an ever-present specter, that makes him a hero.