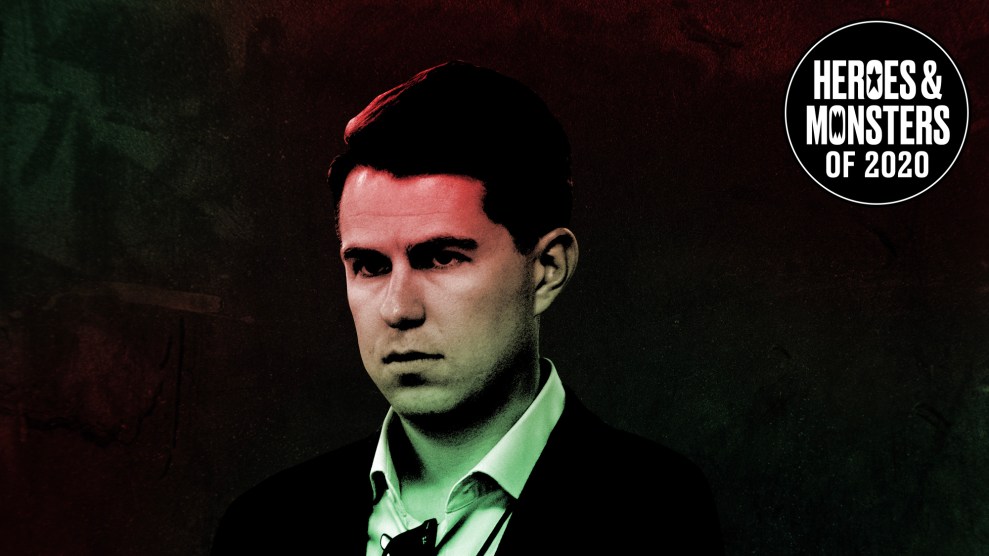 Just before the election, Miles Taylor revealed that he’d written the anonymous New York Times op-ed “I Am Part of the Resistance Inside the Trump Administration” while serving as the Department of Homeland Security’s deputy chief of staff. I was curious what kind of person would present himself as a heroic resister after having helped lead a department that separated thousands of families at the border. So I did some Googling and found 2020’s Monster of the Meritocracy.

Taylor’s path to power started in the halls of Congress, where, working as a congressional page as a teenager, he ran into Vice President Dick Cheney and wished him luck in his reelection bid. Taylor wondered in his high school paper why he, a Democrat, would wish a Republican good luck. But in what would become a pattern, he cut himself some slack. While his classmates were worrying about how they looked to that “special someone,” he was worrying about how he looked to the vice president. He styled himself a young insider, having already interviewed Chris Matthews and dined with Sen. Dick Lugar (R-Ind.).

On a break from Indiana University, he interned for the Defense Department and then for Cheney before becoming, at 20, the youngest political appointee in the Bush administration after getting a spot at DHS. As a Marshall Scholar, he split his time between Washington and Oxford while working to open a DC charter school, write a book on “The Rise and Fall of America’s Post-9/11 ‘Freedom Agenda,’” and produce a documentary about congressional pages. After Oxford, he worked on the Republican staff of the House Homeland Security Committee.

Taylor could have left Capitol Hill for any number of lucrative (if mildly monstrous) gigs. Instead, under President Donald Trump, he rejoined DHS, which had just implemented the first Muslim ban. From there, he quickly rose from an adviser position to chief of staff of the 240,000-person department.

Here are a few of the things DHS did as Taylor climbed the ladder there: It implemented a new Muslim ban, which Taylor publicly defended. It moved to strip some 700,000 immigrants who’d come to the country as children of their work permits, and it tried to do the same to hundreds of thousands of people who’d been living with Temporary Protected Status for decades. It announced a wealth test for prospective immigrants. It separated thousands of families at the border and forced asylum seekers to wait in dangerous Mexican border cities, where they were extorted and kidnapped.

What exactly Taylor was doing while all this happened is unclear. In his telling, he resisted. He claimed, for example, that he tried to stop, or at least slow down, the “zero tolerance” policy that split up families at the border. A Trump administration official provided a different perspective to BuzzFeed, saying, “On multiple occasions, I sat within inches of Miles Taylor during meetings solely focused on ‘zero tolerance’ policy, and he was neither silent nor vocally opposed to the weighty decisions before us.” We do know that none of Trump’s assaults on immigrants prompted Taylor to publish his anonymous op-ed; he decided to write it because Trump resisted lowering flags to half-mast after John McCain died.

Taylor faced no immediate consequences for his work at DHS. After he left, Google quickly hired him as its head of national security policy engagement. When some employees later objected, the company misled them by saying Taylor was “not involved in the family separation policy.” As emails obtained by BuzzFeed showed, Taylor provided talking points and a “Protecting Children Narrative” to then-DHS Secretary Kirstjen Nielsen as she claimed that there was no family separation policy.

Along with his Google responsibilities, Taylor found time to write his book, the #1 New York Times bestseller A Warning. In the book, the author, “Anonymous,” writes that family separation was a stain on the country and the leaders of DHS without revealing that he was one of them. Taylor later said he regretted not doing more to stop the policy. But when news broke a few months afterward that more than 500 parents separated from their children still hadn’t been found, Taylor returned to his usual obfuscating, falsely suggesting that it was because a lot of the parents didn’t want to “claim” their kids.

This is the way Miles Taylor talked about family separation LAST WEEK ("It's horrible. But…") when news broke parents of 545 separated kids still cannot be located. He later deleted the tweet. pic.twitter.com/2QW0TpsNVv

A week before the election, Taylor revealed he was Anonymous. By December, he was playing the victim. A Washington Post profile reported that he was moving between undisclosed locations after receiving death threats, that his finances were in “tatters” but not in tatters enough to be without private security, and that he’s had “serious marital problems.” Told that he sounded like someone with electoral ambitions, he wouldn’t say whether he was planning to run for office. The meritocracy has more rungs to climb.