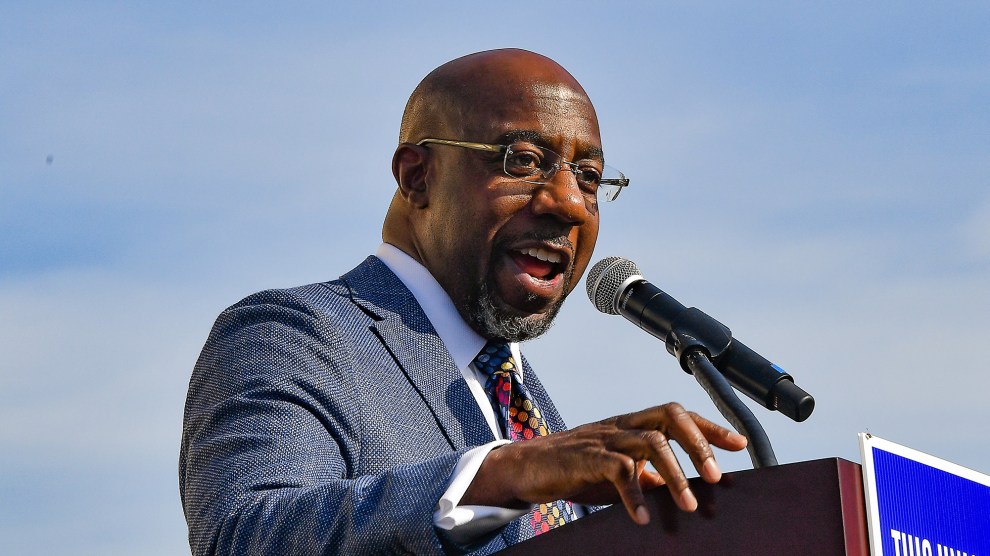 The Reverend Raphael Warnock is at the center of a political vortex. If the Democrat wins the neck-and-neck runoff against Republican Sen. Kelly Loeffler on January 5, he’ll make history as Georgia’s first Black senator—and potentially flip the Senate to Democratic control.

And while runoff elections in Georgia are traditionally disasters for Democrats, as our colleague Ari Berman recently wrote, this time may be different. Warnock, who preaches at the former church of Martin Luther King Jr., carries the legacy of Black religious leaders who fought for civil rights. He is beloved by young progressive organizers. And there’s record cash hauls and enthusiasm backing him, as well as his fellow Democrat and runoff candidate Jon Ossoff. Still, Warnock faces brutal and racist attacks from Republicans, who have unleashed old stereotypes and prejudices about the Black church to smear the candidate as a dangerous radical socialist.

In these last weeks before the big vote, Mother Jones reporter Becca Andrews, who wrote a profile of Warnock in October, went to the state to cover the final push. “His potential victory for the US Senate runoffs depends on the vote outside Atlanta,” Andrews told Mother Jones Podcast host Jamilah King. “I wanted to a get a sense for how people feel about him in more rural Georgia.”

Andrews recently followed the campaign, from Augusta to Albany to Athens, and found out just what is making it tick.

Warnock’s faith has been a huge part of his run, and his events are filled with sermons and hymns. In a normal year, many of his campaign stops would have been in churches. And while he is still reaching voters at church services, they are outdoor drive-in affairs. “Warnock has come out of a tradition of believing we’re first of all, servants of all,” said the Reverend Christopher Johnson, a Methodist pastor in Augusta, Georgia, who Andrews spoke to on the road. “And we also believe in transcending—changing what is to what it ought to be.”

While the fight for civil rights in the American South has long had close ties to religious groups, this year in Georgia there’s a new element: Young progressive organizers have flocked to the state to get out the vote for a candidate who they believe shares their values. This is a particularly powerful dynamic in Albany, a town in southeast Georgia that was hit with a devastating coronavirus outbreak after a funeral in February turned into a super-spreader event. “[Warnock] talks about the importance of seeing people in their humanity and pre-existing conditions,” Amna Farooqi, a 26-year-old community organizer there, told Andrews. “I feel like that messaging really resonates for a lot of people, especially considering that we were a hotspot in COVID.”

Kiana Jackson, 23, is a lifelong resident of Albany and explained to Andrews why she is so excited about Warnock’s candidacy: “When we have a Black man that is a progressive that’s running to be a United States senator from a southern state, then we have to make sure that we’re coming out and we’re supporting them with everything we can.”