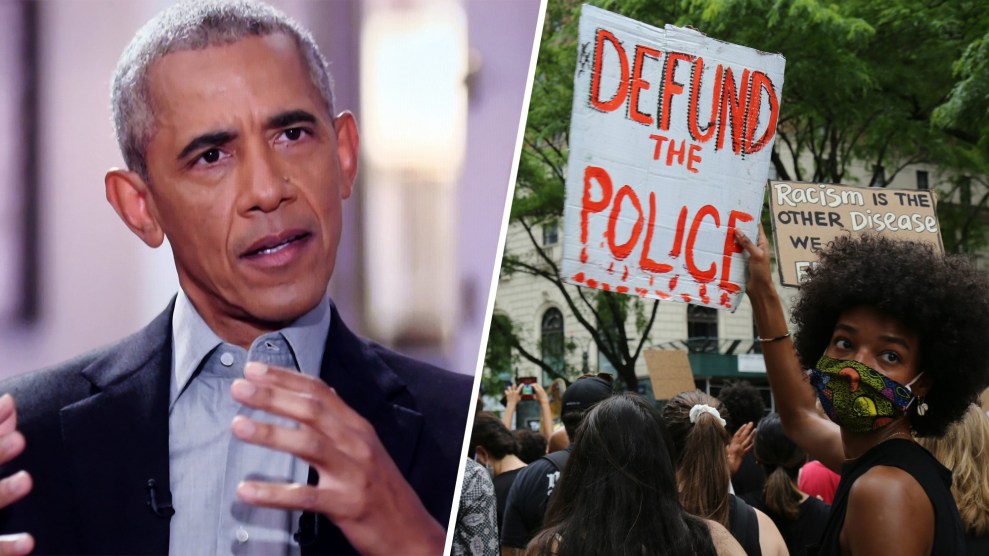 Barack Obama rankled “defund the police” activists this week when he said that “snappy slogans” like theirs turned voters off. Maybe it would be better, many of them joked, if they simply prepended another snappy slogan—“yes, we can”—to “defund the police.” Obama was arguing in his capacity as a former president, perhaps one who felt unduly pressured by the Black liberation movement that had exploded anew on his watch. He had forgotten the lessons from the activism of his younger years about how progress is made in this country and what role activists play in making it.

After white police officer Derek Chauvin pressed his knee into the neck of George Floyd, a 46-year-old Black Minneapolis man, a demand long popular among left-wing and radical Black activists went mainstream: defund the police. Any activist well-versed in the movement will tell you that it’s an effort to reallocate municipal funds from police departments—many of any size are equipped with weapons of war—toward people-centered programs like mental health services or public schools. But one need not be an activist to understand the slogan’s plea: take resources away from the cops who hurt us.

As racial justice protests spread across the country, the Black Lives Matter movement gained large, multiracial support. But even after watching what felt like an endless loop of police unleashing violence on protesters in major cities and suburban towns across the country this summer, liberal pundits and elected Democratic officials thought the demand to shrink police budgets was too radical and too confusing. They fretted that the idea that perhaps a suburban Ohio town of 78,000 doesn’t need a mine-resistant tank, or that cops don’t need more money to tear gas protesters or to shoot Black women while they slept in their beds, would hurt Joe Biden’s candidacy or turn off anonymous white voters who were considering voting for some down-ballot Democrat but who might now run screaming from the specter of Black people asking not to be killed. After all, what else should left-wing activists be doing besides making sure that Democrats win their elections?

Perhaps it is shocking to Democratic politicians, strategists, and those who consider party registration a central part of their identity, but activists do not exist solely to get Democrats elected. They are not instruments of electoral leverage. Let’s consider the way progress and actual change have always worked in the United States.

The idea that enslaved Black people could be freed was once a radical idea. During the 1860 election, the New York Times published a story about Abraham Lincoln’s conservatism on the slavery question, grateful that anti-slavery activists like Wendell Phillips, a prominent abolitionist, had not backed Lincoln. “Thank God, Mr. Lincoln has not yet fallen so low as to command Mr. Phillips’ respect, on the infamous terms which alone can earn it,” the author wrote. “The Abolitionists have nominated a candidate of their own for the Presidency, and are likely to relieve the Republicans from the damaging odium of their support.”

The following year, the paper published an op-ed looking for a compromise to the slavery “problem” and settled on slow, gradual change for the institution. “We have admitted the impossibility and the folly of the immediate abolition of Slavery,” it read. Apparently, the “sudden release” of millions of Black people in civil society would be ruinous for a group of people who were dependent on their slave masters. It’s the same story. Slavery and police brutality are bad, but shouldn’t the machinery of change be slow and grinding?

This summer, as pundits tittered over the polling popularity of defunding the police, I drew comparisons to the civil rights movement:

Much like police reform, the Civil Rights Act, the sweeping bill signed by Lyndon B. Johnson in 1964 enjoyed broad popular support at 58 percent and a 1965 Gallup poll found that 76 percent of Americans approved of the proposed Voting Rights Act of 1966. But after the 1964 act became law, 68 percent wanted only “moderate” enforcement of its mandates. In fact, 42 percent thought the government was moving too fast to bestow voting rights and the right to be served in public places to Black people.

Rev. Martin Luther King, Jr. also polled horrendously in the 1960s. Now, it feels as if white people invoke him at every turn.

But one doesn’t even need to look that far back to find more examples. As a millennial who grew up in religious settings, I vividly remember when gay marriage was unpopular among the public, an issue full of that “damaging odium.” In 1996, it was Democratic President Bill Clinton who signed the Defense of Marriage Act, a federal law that defined marriage as between a man and a woman. In 2004, during his re-election campaign, George W. Bush signaled support for a constitutional ban on same-sex marriages, drawing ire from Democrats, including his Democratic opponent John Kerry. But Kerry wasn’t pro-gay marriage. He only supported civil unions. “I believe the best way to protect gays and lesbians is through civil unions,” he said in 2004. “I believe the issue of marriage should be left to the states.” Sound familiar? In 2005, only 37 percent of people believed same sex couples should be allowed to get married.

Less than 20 years later, no Democratic candidate would dare come out against gay marriage, lest they be rendered an irrelevant bigot. In short, we’ve progressed as a country. But not because activists finally shut up or softened their slogans or accommodated themselves to “moderate” sensibilities—no, they did quite the opposite. After suffering a series of losses at the ballot box (11 states had passed anti-gay constitutional amendments in 2004) and California passed Prop 8, a state ban on gay marriage in 2008, activists regrouped. As The Atlantic reported in 2015, a coalition of gay rights formed a consortium to centralize the message and the strategy. The original message—”an appeal to reason that enumerated the benefits of marriage that were being denied to gay people”—was abandoned in favor of a more radical appeal: Gay marriage was about love. Snappy, you might say.

I remember all the polling suggesting that "same-sex marriage" was an election loser and that queer people should opt for lesser protections if they wanted to win at the ballot box.

Grateful for every activist who says "we don't care what's popular, we care what's right."

Today, would any respected official or pundit dare suggest in public that Black people having the right to vote is radical? Is there a person worth listening to who would argue that we should’ve abolished slavery a little more slowly or perhaps not at all? The argument from many liberals is that getting Democrats elected is the only way to bring about change. But Barack Obama was president for eight years, during which time countless Black people became hashtags after their very public and violent deaths went viral.

The criticism of defunding the police isn’t about the slogan itself or whether it’s too confusing. It’s about change, and about who gets to make it. In truth, pundits and moderate liberals are uncomfortable with change, particularly when the demands for it are coming from people in the street, moving on their own power. The critics either simply don’t want to defund the police or don’t want to offend the moderate white voter, who has the immense power to hold Black progress hostage. But when that progress is finally achieved, those same moderates will put themselves at the center of the story of the movement, co-opting the fight that they once said was far too radical.