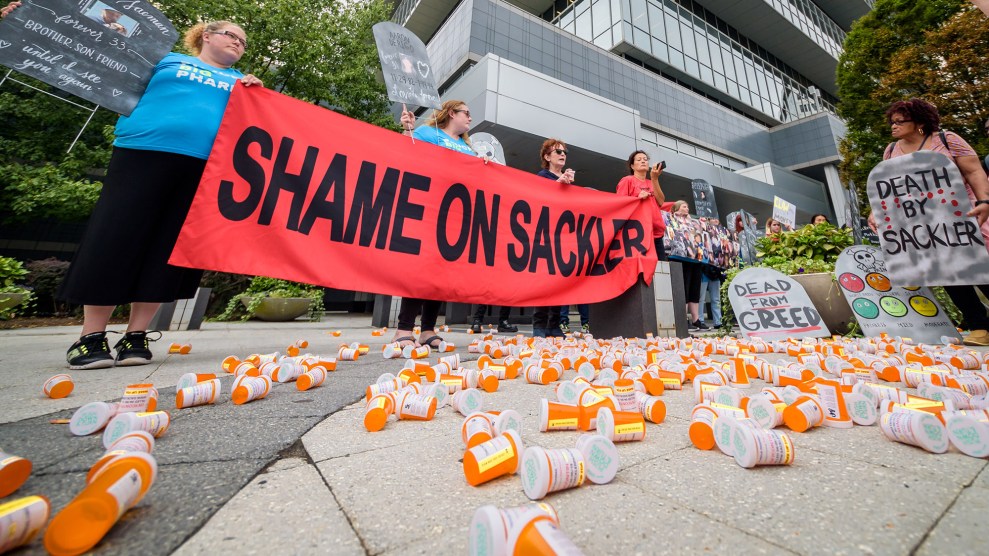 The Sackler family is known for their company, Purdue Pharma, and its well-documented role in the devastating opioid crisis. They profited with billions in corporate and family gains from their highly addictive and overprescribed painkiller OxyContin. As their role in the opioid epidemic became public, lawsuits mounted, and the Sacklers grappled with its loss of public stature, family members sought to ensure that the considerable donations they made to museums and other arts institutions around the world would buy them public support and credibility amongst the upper crust of society. In recent years, as that support began to erode, family members strategized about how to coordinate public responses and PR strategies.

Some conversations about that approach took place on the messaging platform WhatsApp, and  journalist Anand Giridharadas found a tranche of those messages in court papers. On Saturday, he published some of them, spanning October 2017 through early June 2019, on his site, The.Ink. The messages were released as part of a bankruptcy proceeding, he writes, and show:

… how, in the plutocratic echelons, it is assumed that philanthropic gifts made in sunny times can buy you public support from prestigious institutions on a rainy day. They show how a family that could no longer deny the scale of pain and death in the country tended to view the problem primarily through the prism of public relations, their anger concentrated on the difficulty of crafting statements, not curbing the hurt. And the messages show how a profound sense of victimhood descended on some members of the family, perhaps blinding them to the need to address the problem in the way one relative suggested: at a cost to their bottom line.

“We are the most vulnerable of the opponents (as we are a private family owned business) and in their view the easiest prey to get lots of money from!,” Mortimer Sackler, son of a deceased family patriarch by the same name, texted the group in 2018, fretting about legal cases.

Even though the messages include only first names, Giridharadas tried to contextualize them with family members’ full names. In one message, Samantha Sackler Hunt passed along an email from the PR firm Edelman, which itself was forwarding along an email sent by a British reporter to various “cultural institutions” in the UK asking for comment about why the institutions were willing to take money from “a family who have been involved in such serious wrongdoing.” There’s no direct response to Hunt in the messages.

“We are the most vulnerable of the opponents (as we are a private family owned business) and in their view the easiest prey to get lots of money from!”

Last week, two members of the family, David Sackler, a Purdue Pharma board member until recently, and Dr. Ruthe Sackler, his cousin and also a longtime board member, testified before the House Oversight Committee and offered sympathy for victims and families who have suffered because of the opioid crisis. But they “largely sidestepped would-be booby traps and deflected blame to ‘management’ and independent, non-family board members,” according to the New York Times. The hearing also offered public scrutiny on the roughly $10 billion the family pulled out of the company amidst its legal woes.

In 2019, Mother Jones Senior Reporter Julia Lurie reported that despite repeated denials from the company and family members about having any knowledge about the devastatingly addictive nature of OxyContin, Richard Sackler, Purdue Pharma’s former president, had, as far back as 2000, worked with others to create what he called a “pain movement.” In cahoots with other drug makers, such as Johnson & Johnson, Purdue Pharma worked to maximize the sale of opioids and minimize efforts to curb to addiction or over-prescription. In 2007, the company agreed to roughly $635 million in fines, and three top executives were charged criminally for “misbranding” the drug. In 2019 the company filed for Chapter 11 bankruptcy protection in a deal that wasn’t as good for victims as it might have appeared, Lurie wrote at the time.

The WhatsApp messages capture a period of time in this saga when the museums and institutions that had taken substantial financial gifts from the family seemed to be putting distance between themselves and the family name—and its money. Then, Giridharadas notes:

… alarm grew as even that most mercenary of sectors — banking — seemed to turn its back on Purdue. “Does anyone know why JPM is not doing Purdue banking?” Jeffrey Lefcourt texted the family on May 24, 2019, just days after a wave of museum disavowals, apparently referring to the banking giant J.P. Morgan Chase. “What’s their reason? Any concern they will stop doing banking for family? Have any of you spoken to them?”

Mortimer responded: “They told Purdue it was for ‘reputation’ reasons but that they were (so far) limiting it only to Purdue and not to the family.”

Interspersed with the communications strategy comments are family members’ thoughts about coordinating and funding an “independent” panel that would “identify and fund existing best practices” and identify communities to “tackle the issue.” Michael Sackler had floated the idea, Giridharadas notes, of enabling the company to “become the solution to a problem the company was still causing.”

Only once in the collection of messages he obtained, Giridharadas notes, did any Sackler suggest sacrificing some of the family’s OxyContin profits. In October 2017, Ilene Sackler Lefcourt, one of the eight family members specifically named in some of the lawsuits, brought it up:

“I just spoke to Josie. She told me under active consideration, proposed by Craig, is stopping all sales rep. activity of oxy. The financial result is being calculated. I am in favor of moving this ahead asap. And think the bigger the estimated cost to the company, the better.”

Less than two minutes later, a family member replied: “This is not the forum to discuss that.”