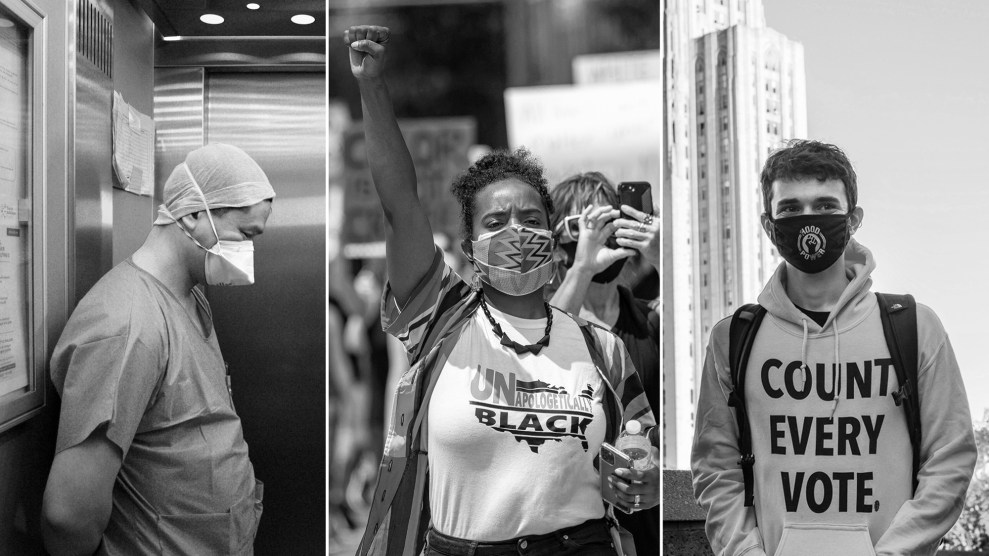 A disease, global in reach but intimate in its cruelty. A nation plunged into economic ruin. A president raging and incompetent. Society’s unforgiving disparities revealed like never before. The arrival of the coronavirus in 2020 “found a country with serious underlying conditions,” wrote the Atlantic’s George Packer, a lifetime ago in June. “Chronic ills—a corrupt political class, a sclerotic bureaucracy, a heartless economy, a divided and distracted public—had gone untreated for years.” The death toll has tripled since then, to over 326,000, a daily horror show set against an often bonkers election campaign, one that featured the resurrection of a Democratic candidate thought to be on life support and a ruling party in total surrender to an unhinged autocrat.

What a year to be putting out a weekly news podcast.

On this week’s episode of the Mother Jones Podcast, the entire production team joins host Jamilah King to reflect on 2020 and replay what we thought were the most meaningful moments from the 58 shows we broadcast this year. It seemed like the best way—both personal and journalistic—to chart these extraordinary events, from the beginning of the pandemic to a riveting, protracted election and its aftermath.

We start as the coronavirus catches fire in New York City. In March, producer Molly Schwartz wrapped her microphone in a compost bag and followed reporter Noah Lanard to document how restaurants in Flushing, Queens, faced imminent collapse. Little did either of them know just what a turning point it would turn out to be. New York City shut down days later.

“The blood is all on his hands. The people dying now are Trump deaths.”

I soon contracted COVID-19 myself, and as I recovered, I turned to Peter Staley, a prominent AIDS activist who worked (and sparred) with Dr. Anthony Fauci in the early days of that epidemic, during the Reagan administration. Fauci, then as now, was chief of the National Institute of Allergy and Infectious Diseases. Staley’s scathing indictment of Trump’s inaction haunts me still. “We know now we don’t have to wait till the end,” Staley told me. “We know now that he messed up big time, that first month is the reason we might have 100 to 200,000 deaths in the US.”

“The deaths are all on his head,” he said. “The blood is all on his hands. The people dying now are Trump deaths.”

That was back in late March. We could not have imagined that those numbers he suggested would have so dramatically underestimated the death toll.

As some of our colleagues, like parents of school-aged children all over the country, struggled to deal with Zoom classrooms, the unequal impact of coping with quarantine became apparent. Learning from home was hard enough, but Molly found that remote education in a place known as the “valley of the telescopes”—in Pocahontas County, West Virginia, where WiFi is outlawed to preserve the integrity of a massive radio telescope—was a complete disaster. Filing homework was all but impossible, another example of the deepening divide between the digital haves and have-nots that the pandemic only exacerbated.

“I’m tired. We’re all tired. And we can be angry and tired at the same time.”

But other historic fissures were soon to crack open anew. The death of George Floyd in May at the hands of the Minneapolis police was broadcast to the world and “pushed nearly anyone with a political conscience into physical action,” Jamilah wrote soon after, in a painful but galvanizing personal essay we turned into radio. “Black people have long been exhausted, talking about why our lives matter,” Jamilah explains in this recap episode. “It was important to say, you know what, I’m tired. We’re all tired. And we can be angry and tired at the same time.”

Anger indeed was a 2020 touchstone. As we neared November 3, it didn’t take much to imagine a contested election and, after Kenosha, armed right-wing vigilantes patrolling American cities. “Make no mistake, if you give power to Joe Biden, the radical left will defund police departments all across America,” Trump seethed, Gaddaffi-like, during his RNC acceptance speech. “No one will be safe in Biden’s America.” Later, to the militant Proud Boys, he offered an incitement, both dog whistle and bullhorn: “Stand back and stand by.”

Trump’s enablers, everywhere, were loving it, including Senate Leader Mitch McConnell, who upon the death of Supreme Court Justice Ruth Bader Ginsburg in September, began ramming through a new conservative justice. “His entire vision for the Trump presidency has been to pack the courts, the only thing he has done, every single week,” reporter Ari Berman explained during a podcast about this unfolding democratic emergency. “That’s how the Republican Party and the conservative movement will hang on to power long after Donald Trump long after Mitch McConnell have disappeared from the political scene.”

“We were fed up, and we decided to do something about it in our own way.”

Jamilah recalls the breathtaking hypocrisy of McConnell and the Republican party in the run up to Amy Coney Barrett’s confirmation: “It was a moment that kind of signaled that ‘we’re done’,” she says. “We’re done, being run over and being dictated to. We were fed up, and we decided to do something about it in our own way.”

And that was the sentiment that turned out, finally, to hold. After intimations of violence at polling places and grim possibilities that repeated efforts at voter suppression would win out, Election Day 2020 was a picture of democracy in action. In the swing state of Arizona, long a laboratory for anti-immigrant laws, reporter Fernanda Echavarri documented a new group of activists determined to turf Trump from office, a coalition that became emblematic of Joe Biden’s ultimate victory in November. Voters turned out in record numbers to topple the president. “It really was this full circle,” Fernanda says of the effort to flip Arizona. “Young, old, rich, poor, people came together and said, ‘We’re not going to have this here in Arizona anymore. And not only that, we’re not going to have this country be run by somebody like this anymore.'”

“It was great for me to be reminded that change takes time,” Jamilah says, neatly summarizing this tumultuous, tragic, unnerving, historic year.

Check out the full 2020 recap by listening to the Mother Jones Podcast, below: