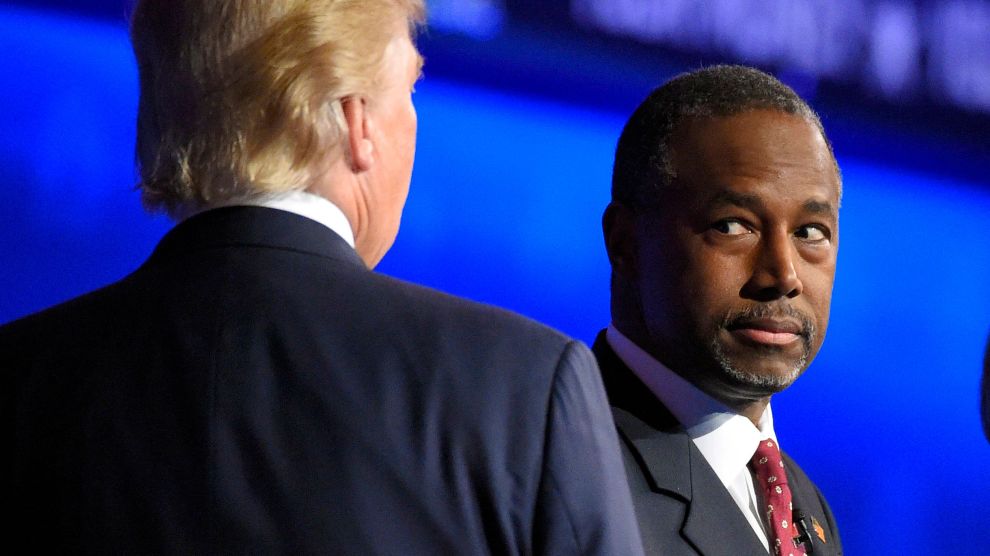 President Donald Trump’s recent spate of pardons has justifiably provoked outrage. War criminals, crooked Republican congressmen (who had supported Trump), and Mueller probe felons—Trump provided passes to a wide assortment of convicted scoundrels and up-ended the justice system. Among these scurrilous pardons, one has slipped by without much notice: the pardon of a Pittsburgh oral surgeon named Alfonso Costa, who committed criminal health care fraud. Costa just happened to be a close friend of Ben Carson, the secretary of Housing and Urban Development, and he had helped Carson pocket hundreds of thousands—perhaps millions—of dollars.

It is another example of how the Trump swamp works.

In 2007, Costa and a partner were charged with health care fraud for defrauding insurance companies, including Blue Cross Blue Shield, of $44,000. They pleaded guilty. Carson sent a gushing letter to a federal judge in Pittsburgh asking for leniency for Costa, who he has called his “best friend.” (Carson wrote that “next to my wife of 32 years, there is no one on this planet I trust more than Al Costa.”) Costa was sentenced to three years probation, one year of house arrest, 100 hours of community service. He was ordered to pay restitution of $44,000 and a $250,000 fine. His dental license was revoked. He served two years of probation. Costa did his community service working for Carson’s charity.

But Costa was more than a close friend to Carson. He was a business partner. As Mother Jones’ Russ Choma and the Associated Press revealed in 2015, Carson had close business links with a real estate firm Costa owned called Costa Land Management. (Carson did not mention this in his letter to the judge.) And Costa’s company helped oversee a lucrative investment for Carson and his wife.

As we reported five years ago, Costa, who met Carson in the 1990s, was key to Carson’s acquisition of a profitable multi-million-dollar commercial real estate property:

Carson [in 2007] created two limited liability corporations in Pennsylvania—BenCan LLC AND INBS LLC—that listed Costa’s residence at that time as their address. (And they still do, though Costa sold that house in 2011.) Shortly after their formation, the companies were used to purchase an office building in Mount Lebanon, a Pittsburgh suburb. Real estate records list Carson as the owner of BenCan and his wife Candy as the owner of INBS; the couple jointly purchased the building for $3 million, $2.4 million of which they borrowed. On both the mortgage and the deed, Carson and his wife state their official addresses as Costa’s office. Many of the publicly available documents associated with this property, including lease agreements, are signed not by Carson or his wife, but by various executives from the Costa Land Company, including the outfit’s chief operating officer, Sarah Piccione. Neither Costa nor Piccione responded to requests for comment.

These LLCs made the Carsons between $200,000 and $2 million a year, according to the candidate financial disclosure form Carson filed in 2015.

At the time, the Carson campaign refused to discuss the details of Carson’s business relationship with Costa. After the stories on Carson and Costa appeared, Carson released a statement: “Al Costa is my best friend. Al Costa is my very best friend. I know his heart. I am proud to call him my friend. I have always and will continue to stand by him. That is what real friends do!”

And there was more to the Carson-Costa story. We discovered a curious item on Carson’s financial form. He listed a plot of land in West Palm Beach worth $1 million to $5 million and described the property as “CPC Grand Prix South Lot.” But Palm Beach County real estate records showed no Carson ownership of such a lot. Those records only registered Carson’s ownership of his personal residence, a home on a golf course in West Palm Beach that had been purchased for $775,000 in 2013. And neither of the shell companies he and his wife had used for their Pittsburgh real estate deal with Costa owned property in Palm Beach County. So there was a mystery: How did Carson own the Palm Beach property listed on the disclosure form?

There was one clue. According to Palm Beach County real estate records, Costa’s real estate company purchased a lot in a development called Grand Prix Village South in March 2014 for $2.8 million. Was this connected to Carson’s real estate investment? Was Costa fronting for Carson? Was Carson sharing this investment with the felonious fraudster?

The Carson campaign refused to clear up the puzzle. “We are not offering up the detail you have requested,” a Carson campaign spokesman told Mother Jones at the time. And Costa did not respond to requests for comment.

Costa has done much for and with Carson. He has worked with Carson’s charity. He has taken family vacations with the Carsons, including to Costa’s luxury property on the Amalfi coast. (The “most beautiful spot on earth,” Carson has said.) He has helped Carson acquire a large amount of cash. And Carson, who has loyally served Trump for years, used his influence and requested the pardon for Costa.

Pardons are supposed to be used to correct miscarriages of justice. Of course, Trump sees them as gifts he can dole out to reward loyalists and cronies or to score political points. In this case, it appears Trump was doing a personal favor for Carson, who was doing a personal favor for an old buddy who made him money. It’s not the most egregious of Trump’s pardons. But it is a reminder that Trump has kept the swamp alive.