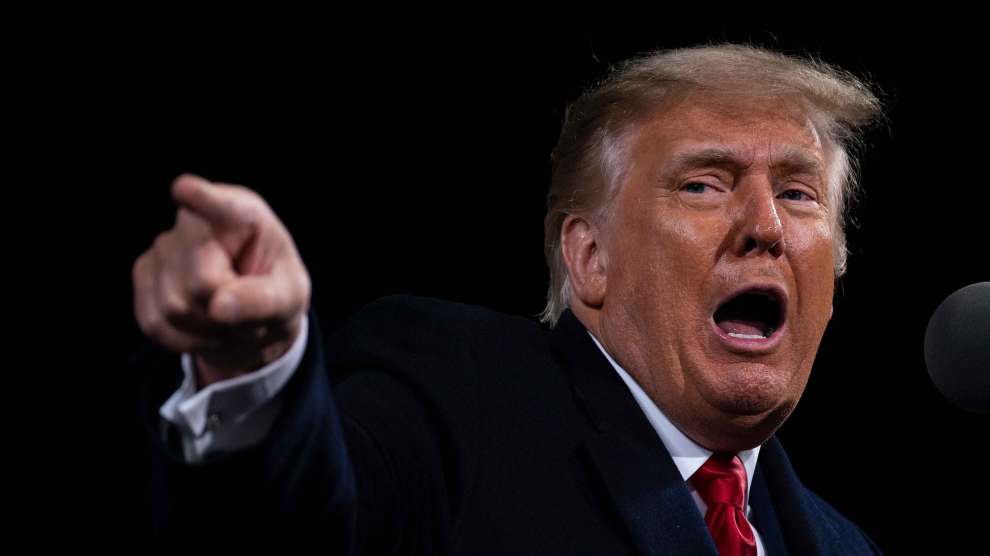 It’s the weekend, which means President Donald Trump spent a couple of hours this morning tweeting lies about his election loss. In recent months, Twitter has attempted to stop the flow of misinformation coming from the president’s account by flagging such tweets as “disputed.” On Saturday, Twitter took it a step further by severely restricting the ways users could engage with three of Trump’s tweets that had been labeled lies.

When users tried to like or retweet the messages, they were instead alerted: “We try to prevent a Tweet like this that otherwise breaks the Twitter rules from reaching more people, so we’ve disable most of the ways to engage with it.” Retweeting with a comment attached was still enabled.

never seen Twitter do this before. Much stricter engagement with 3 Trump tweets this morning pic.twitter.com/TddOPuk3um

The move is part of an effort to stem the tidal wave of lies that can spread quickly on Twitter. Earlier this year, Twitter began flagging Trump tweets that violated its policy about disseminating disinformation about the election, as my colleague Ali Breland reported, in September:

Users trying to view the tweet on Saturday were first met with a warning from Twitter explaining that the election misinformation tweet is against Twitter’s civic and election integrity rules:

We placed a public interest notice on this Tweet for violating our Civic Integrity Policy, specifically for encouraging people to potentially vote twice. https://t.co/yy674OE26n

This is only the latest instance of Twitter trying to curb misinformation spread by the President. Twitter put the same warning on a Trump tweet last month in which he said drop boxes for mail-in votes could lead to election fraud. Facebook also said that videos of Trump encouraging people in North Carolina to vote twice would be taken down because the company found them to be in violation of its policies against voter fraud.

Members of the Trump administration and other high-profile supporters were also hit with flags in the run-up to the election and in the aftermath. But because Trump tweets so much disinformation, as time went on the labels almost seemed meaningless. While election fraud tweets were marked as disputed, misinformation about other topics—like President-elect Joe Biden or the coronavirus—are still free to spread to every corner of Twitter.

But apparently Twitter still doesn’t know how to deal with the president, who seems hellbent on using his bully pulpit solely for spreading dangerous lies. The social media giant quickly reversed course on Saturday.

lol they backed down and changed it to this pic.twitter.com/fOdjA9BjhU

Users are now free to retweet and like the president’s bogus lies once again.