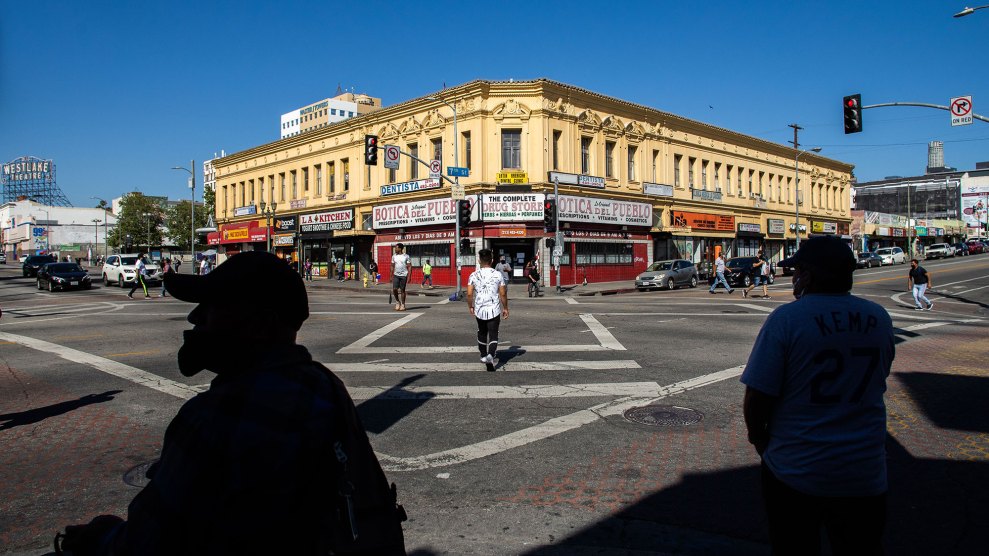 Latino workers cross the street in the Westlake area by MacArthur Park, Los Angeles on May 21, 2020. - Undocumented immigrants impacted by the corornavirus shutdown could apply for California coronavirus emergency assistance plan for undocumented people in April.APU GOMES/AFP via Getty Images

For some undocumented people, the concern started in early November, when the CEO of Pfizer said in an interview that the COVID-19 vaccine “would be available for free to all American citizens.” What about the more than 10 million people living in the United States without legal status, they thought? Many are elderly, many live in multigenerational homes, many work essential jobs, and many have been hit incredibly hard by the coronavirus pandemic. Would they have to pay exorbitant fees for the vaccine? Or would they simply not be able to get it at all?

This week, in the middle of a nationwide spike of coronavirus cases, millions watched videos of the first US health care workers receiving the vaccine, marking the start of the biggest distribution effort in US history. As more news trickled out about the government’s plans, the New York Times reported on the Trump administration’s plan to ask states to share personal information—birth dates, ethnicities, and home addresses—of those receiving the vaccine. Beyond their broader concerns about vaccine availability and cost, undocumented communities that have been demonized and terrorized by the Trump administration now worried that getting the vaccine could expose them to additional government scrutiny—including the threat of deportation.

“This should be a public health issue, and the public is everyone,” said Juliana Macedo do Nascimento, policy manager with United We Dream, a nationwide immigrant-youth led network. “There shouldn’t be a division between immigration status, and there shouldn’t be any kind of scare tactics to keep people away.”

“There shouldn’t be any kind of scare tactics to keep people away.”

On December 1, New York Gov. Andrew Cuomo sent a letter to the Department of Health and Human Services, urging the agency to protect undocumented communities during the vaccination process. “[B]y asking for personal information, undocumented immigrants could be dissuaded from taking the vaccine,” he wrote. “Time is of the essence as we get closer to the distribution date and I urge the administration to address these issues quickly.” Other states are defying Trump’s request, saying they will provide only data that protects the patient’s identity.

For do Nascimento, this shouldn’t even be a topic of conversation, because a patient’s information should be protected under HIPPA laws. “So now suddenly it doesn’t apply to the vaccine?” she said. She worries that misinformation—say, if undocumented folks hear that they may be required to provide a Social Security number or show a passport—could keep people from receiving the vaccine. (An official with Operation Warp Speed said there won’t be Social Security or driver licenses data collected, only dates of birth; meanwhile, CDC rules say people shouldn’t have to pay anything out of pocket when receiving a dose of the vaccine, though there could be fees added by the vaccine administrator.)

To overcome this challenge, advocates and public health officials argue immigrant and undocumented communities will need to hear directly from trusted messengers—the kind of culturally competent leaders who understand why people may be skeptical of the vaccine distribution plan. They must be able to address their fears and answer their questions, including in immigrants’ native languages. The Chicago Public Health Department is just one example of a city agency partnering with community-based organizations to make sure their coronavirus materials are translated; Dr. Candace Robinson, medical director for the department, said they’re also working with people who are already trusted messengers within those communities.

In Boston, Dr. Joseph Betancourt—a primary care physician and chief equity and inclusion officer at Massachusetts General Hospital—has been working to get the right information to immigrant and Latinx communities since the beginning of the pandemic. For months now, he and his team have been planning on how to best explain to vulnerable communities that this time they may be among the first to get something. “That usually never happens,” he said. “If you never get anything first and then all of the sudden someone says, ‘Tengo una vacuna, and you’re first,’ that further adds to the level of mistrust.”

In Boston “we have a pastor in an evangelical church who has a big following on YouTube telling people not to take the vaccine.”

A few weeks ago, Betancourt participated in a Facebook live event with a local Spanish-language newspaper. One of the things that came up was that some religious leaders were telling their Latinx parishioners not to get vaccinated. “I really hope it’s just local, and I pray it’s not national, but here we have a pastor in an evangelical church who has a big following on YouTube telling people not to take the vaccine,” Betancourt said. “So we need to figure out if there are any particular threads of misinformation in your community, and you have to take that on.”

For a while there have been baseless conspiracy theories saying, “Don’t get the vaccine because the government will implant a chip in you,” do Nascimento said. “They say it’s not safe, and it’s a way for the government to control you. So it’s clear that there needs to be a lot of education about how safe and how important the vaccine is.”

The outreach has to also highlight the importance of essential workers in all fields, said Dr. Georges Benjamin, executive director of the American Public Health Association. They “have to be prioritized to get the vaccine” regardless of immigration status. To really fight this virus, “we have to start with the premise of recognizing that infection anywhere is a risk to everyone everywhere.”

And at the time of vaccination, Benjamin says, health care workers will need to be clear with people about what personal information they need to collect and why. For example, to track side effects of the vaccine, even if they’re minor, he says many people will get a follow-up phone call after each of the two shots. So folks should know to answer the phone when an unknown number calls, and that the call will be part of the process.

As Mass General’s first chief of equity and inclusion, Betancourt spends a lot of time thinking about how to address disparities and achieve equity in health care. He believes that unlike at the beginning of the pandemic, equity is now playing a key role in how experts and state governments are planning to distribute the vaccine. Issues of inequity for communities of color have become “more real” with COVID, and “there is larger awareness now about the importance of incorporating this into public health strategy.”

Do Nascimento is also optimistic because the timing of the vaccine rollout coincides with the final month of the Trump administration, whose strategy was to take an already flawed immigration system and make it as cruel as the courts would let it. Having Joe Biden in the White House could change how many immigrants, documented or not, feel about getting the vaccine. “The next administration is going to have to do a lot of education in eliminating the fear that this current administration has brought up in the undocumented community,” she said. “For sure.”