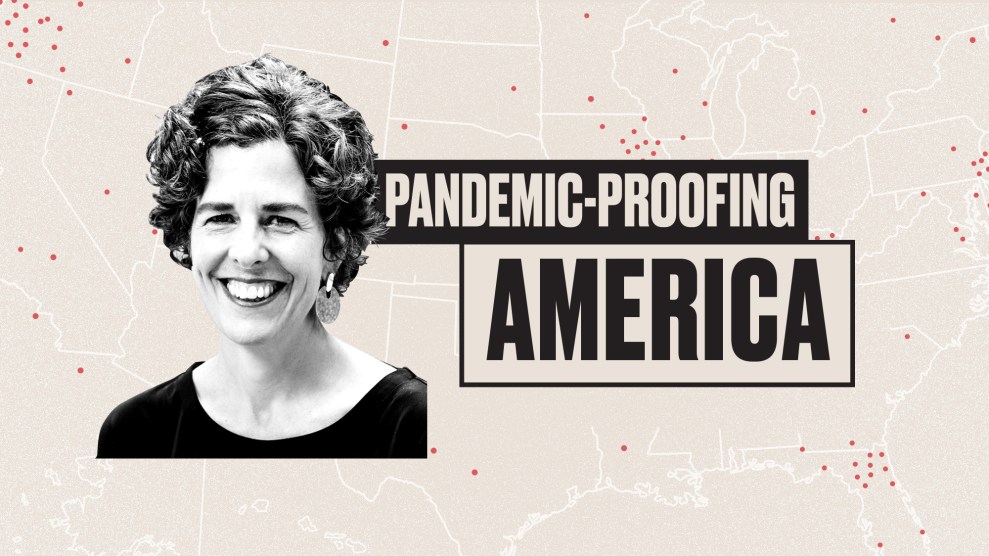 As the world grapples with the devastation of the coronavirus, one thing is clear: The United States simply wasn’t prepared. Despite repeated warnings from infectious disease experts over the years, we lacked essential beds, equipment, and medication; public health advice was confusing; and our leadership offered no clear direction while sidelining credible health professionals and institutions. Infectious disease experts agree that it’s only a matter of time before the next pandemic hits, and that one could be even deadlier. So how do we fix what COVID-19 has shown was broken? In this Mother Jones series, we’re asking experts from a wide range of disciplines one question: What are the most important steps we can take to make sure we’re better prepared next time?

Months before Donald Trump won the 2016 presidential election, flipping the state of Wisconsin from blue to red, political scientist Katherine J. Cramer published The Politics of Resentment: Rural Consciousness in Wisconsin and the Rise of Scott Walker. People outside of the state’s metropolitan areas, Cramer found through dozens of interviews, had grown to distrust that “liberal elites” had their best interests in mind. “Rural resentment—no less than partisanship, race, or class,” the book argued, “plays a major role in dividing America against itself.”

Four years later, those divisions are as solid as ever, and a pandemic has shown how deadly they can turn. Cramer, a political science professor at the University of Wisconsin, Madison, watched the virus hit the state’s cities first. Amid a tornado of misinformation and political polarization, many people in more rural—and more conservative—corners of the state became skeptical about whether the pandemic response they were hearing about was designed for them.

“‘When you’re out harvesting, and on your tractor, just have a mask in the cab, so when someone comes along, he can just put it on quickly.’ That just so clearly communicates: We get what your life is like, and this is gonna help you and your neighbors stay healthy.”

Stanching a pandemic relies on a delicate social contract; you have to wear a mask, but you need your neighbor to wear a mask, too. And even a new presidential administration with a crack pandemic response team can only get so far if half of its constituents won’t heed its advice. I reached out to Cramer to hear her thoughts on how to bridge the urban-rural divide that’s now threatening all of our lives.

On what drives some rural residents to resent mask-wearing directives and coronavirus warnings: My research has involved inviting myself into the conversations of people in neighborhood gathering places, like diners and gas stations and such, in more rural communities in Wisconsin. After about a year of doing that back in 2007–2008, it became pretty clear that, regardless of where I was in the state, there was this sense of people feeling like they weren’t getting their share of political power. ‘All the decisions were made in Madison, or Milwaukee,’ they were saying, ‘they’re made by people in cities. And we don’t get a say in all these regulations that are imposed upon us.’ They were also feeling like they weren’t getting their fair share of resources. In their minds, the good jobs and all the wealth are in the cities. And city people are just kind of oblivious to this, they don’t understand how good they have it. They were also saying, ‘We don’t get our fair share of respect, because the people making the decisions don’t understand our lives, don’t understand the challenges that we face. And really just don’t even like us. They think we’re racist, and sexist, and homophobic, Islamophobic.’ They weren’t using those terms, but that was kind of the sentiment they were conveying.

So when the pandemic came along, and because of the way it hit the United States, primarily in urban centers first, many people were resistant to the shutdowns and to the advice of public health measures because they were perceiving that these were decisions that were being made to fit urban situations. Like a one-size-fits-all kind of solution. ‘Those people in the cities making the decisions, they’re just clueless about the fact that it doesn’t make sense for me to wear a mask when I’m in my yard, because my yard is like 20 acres.’

Looking at the map of COVID-19 rates, you can say, well, it’s not an urban problem anymore. It’s spreading like wildfire across the state. Part of what’s also going on is people are paying attention to the leaders that they trust. And in a lot of these places those are Republican leaning. The Republican leadership in the state is just very opposed to stay-at-home measures and even mask wearing. Much like President Trump, their behavior has been to not wear masks.

On how urban dwellers can show up for their rural neighbors: What has worked for me has been to be with people on their own turf, and just stop talking as quickly as possible. And make it clear that you’re there, whether it’s virtually or in person, to listen and not to convince them of anything, not to persuade them to behave a certain way, but basically to say, ‘What are your concerns? What are your challenges? What is life like here?’ It’s so valuable in a lot of ways because it conveys respect. It conveys that you actually care. And it’s very possible that the ideas about what’s going to fix a pandemic in rural places have not been formed by understanding what’s going on in rural places. I don’t know that for sure. I’m not a public health official. But—what do people in rural communities think would help? It just helps to listen.

On how public health experts could better bridge the divide: There’s an organization called the Rural Wisconsin Health Collaborative. It’s basically like a coalition of people in the medical industry in rural communities across the state. What they’re trying to do is to be very careful to not impose messages from outside, work through kind of trusted influencers within communities to gently encourage people to do the 6-feet-apart and mask wearing in a way that shows clear awareness of how they spend their time. Not ‘when you go dine at an outdoor sidewalk cafe it’s probably best…’ People in rural places aren’t going to hear that. ‘Okay, when you’re out harvesting, and on your tractor, just have a mask in the cab, so when someone comes along, he can just put it on quickly.’ That just so clearly communicates: We get what your life is like, and this is gonna help you and your neighbors stay healthy.

What Biden’s pandemic response team should do: I would send the most down-to-earth ambassadors to local talk radio programs. I would, I’m not kidding. Radio has a lot of power in rural America. A lot of times there’s no other local media. And a lot of these folks have jobs for which they can have radio on in the background the whole time. A lot of times these tractor cabs have satellite radio, all the bells and whistles for really good radio reception. Also they drive a lot, whether it’s to shop or, when school is in session, to get their kids to and from school.

These talk radio shows, they’re like little on-air communities where the callers seem to recognize each other, and the host recognizes the callers, and I think they’re really important sources of opinion leadership.

One thing I’ve noticed on the local conservative talk shows: Early on in the pandemic, looking back on it now, I’m surprised by how supportive they were of wearing masks, and how that changed over time. I think there’s something to learn from that. Like, here’s an example: A caller would call up and say, ‘How can the grocery store tell me I have to wear a mask when I come in?’ And the host responded saying, ‘Hey, it’s like secondhand smoke, you know, we all decided we were going to do this thing to keep each other healthy, where we’re not going to smoke indoors. It’s basically the same thing.’ And that kind of argument just sort of evaporated over time. I think a lot of it is just how partisan the issue became.

Another interesting thing that came up was veterans, one of the first things they learned is how to prevent other people in their corps from being killed. And there’s a host out of Duluth, Minnesota/Superior, Wisconsin, who himself was a Marine Corps veteran and used this argument with some of his callers. One of his callers said, ‘Man, you’ve drunk the Kool-Aid,’ and he responded, ‘No, here’s the thing. Here’s the first thing I learned, the other people in your unit, you figure out how to not get them killed. Wearing a mask is like that.’ And looking back at it now—that’s a very progressive argument. You don’t hear it too much in conservative circles anymore.