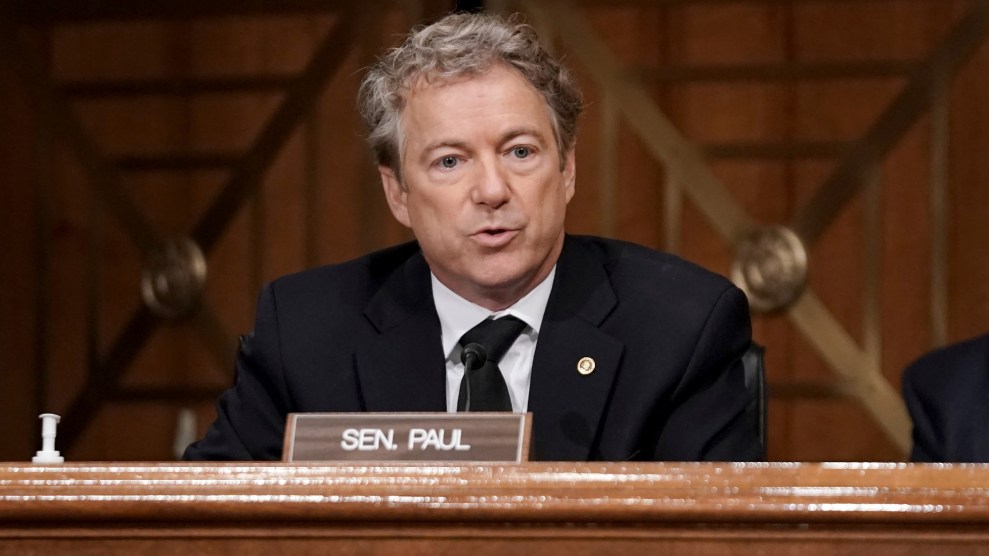 On Wednesday afternoon, President Joe Biden’s inaugural address was a call for unity, healing, and reconciliation. In his first speech delivered to the nation as president, Biden name-checked some of the biggest threats facing the country, including climate change, the coronavirus, and white supremacy.

“And now, a rise in political extremism, white supremacy, domestic terrorism that we must confront and we will defeat,” Biden said on the steps of the Capitol that had been stormed by a violent Donald Trump-supporting mob only two weeks before.

Guess which one conservatives decided was a personal attack? “Much of it is thinly veiled innuendo calling us white supremacists, calling us racists,” Sen. Rand Paul (R-Ky.) whined on Fox News on Wednesday night. “[He’s] calling us every name in the book, calling us people who don’t tell the truth.” Let’s not begin to unpack the Trump election loss denier’s injured innocence about someone’s capacity to tell the truth. It’s his hurt feelings about the term “white supremacist” that’s my concern.

Moreover, I shouldn’t single out this Kentucky senator when there were others. Somehow, it never seems to have occurred to any of them that some introspection on why one feels so triggered, so personally attacked by the words “white supremacy” might be in order.

A prerequisite for comfort in the universe many conservatives occupy is the full embrace of the role of the victim—as essential when they act as perpetrators as when they feel personally attacked. It’s part of the old American tradition of white innocence, the idea that white people deliberately remain in willful ignorance about racism in order to keep the racial hierarchy intact, a phenomenon author and essayist James Baldwin discussed in his 1962 essay, “My Dungeon Shook: Letter to My Nephew on the One Hundredth Anniversary of the Emancipation.”

“They have destroyed and are destroying hundreds of thousands of lives and do not know it and do not want to know it.” Baldwin wrote. “It is not permissible that the authors of devastation should also be innocent. It is the innocence which constitutes the crime.” Sixty years ago, Baldwin recognized and explained how white America’s collective failure to grapple with the country’s racist history is why structural racism persists.

“It is not permissible that the authors of devastation should also be innocent. It is the innocence which constitutes the crime.”

Biden, of course, did not name any specific people as white supremacists, but that very same night elected officials and GOP-friendly media figures joined Rand Paul in mewling about how unfair the new president was. How could Biden ask for unity yet call us names in his first minutes as president?

Paul’s record on civil rights and Black equality speaks for itself. In June, he held up a federal bill that would make lynching a federal hate crime. During his 2010 campaign, Paul was criticized for suggesting that the Civil Rights Act shouldn’t apply to private businesses; they should be allowed to discriminate.

It’s no surprise that Paul would use the Fox News megaphone to air his grievances about the new president daring to suggest that America has some (okay, a lot) of work to do on its deep-seated racism problem. For years the network took the lead in airing and thereby legitimizing odious views on race. Obviously, during the Trump years it served an essential role as the former white supremacist-in-chief’s mouthpiece. But with Trump effectively silenced, primetime host Tucker Carlson, one of his most ardent cheerleaders, fretted on his show about Biden’s call to fight extremism.

But what did expressing a commitment to battling white supremacy really entail, Carlson wondered. “Innocent people could be hurt in this war,” he lamented. “They usually are.” But Carlson need not wonder what the victims of Biden’s “war” on white supremacists look like. Perhaps it’s easily explained by someone like Blake Neff, a former writer for his show who promptly resigned last June after it was discovered that he had been posting offensive messages about people of color in an online forum. Or maybe it’s someone who refers to the people in Iraq as “semiliterate primitive monkeys,” as Carlson did in 2008.

Karl Rove, a former adviser to George W. Bush who had the gall to have acknowledged Biden won the election, took advantage of Biden’s remarks to reestablish his right-wing cred. He escalated the faux-outrage to a new level when he also took to Fox News, declaring “I was offended,” about Biden’s address.

Karl Rove: "The racism thing to me is — I was offended"

If you are offended by someone saying we need to battle against racism, then perhaps you need to do some self reflection pic.twitter.com/uHg7OtXAu6

Remember Karl Rove’s expertise as the master of dirty politics? In just one of many examples, he launched a smear campaign in South Carolina during Arizona Sen. John McCain’s campaign against George W. Bush in 2000, by suggesting that the former prisoner of war’s experiences left him an emotional wreck with a violent temper, that his wife was a drug abuser, and that he had an illegitimate Black child. So he had exquisite credibility when he went on to say that Biden was wrong to say we are divided by race, extremism, and nativism. “No,” he said. “We’re divided…over policy.”

Yes, when hundreds of people, some of them belonging to groups that want to usher in a white ethnostate, stormed the Capitol building chanting “Hang Mike Pence” after constructing a gallows on the Capitol lawn, that was merely a policy disagreement. In fact, when the very channel Rove spewed this nonsense on, refers to racial just protesters as thugs and terrorists, it’s just a little policy disagreement over whether or not police should be legally allowed to kill Black people with impunity.

Their behavior is so breathtakingly hypocritical that it’s easy to treat it as just another depressing flashpoint in the rapidly escalating culture wars. But, pretending that Biden’s single line about white supremacy and his missives against racism are secretly an attack on them personally—and by extension all white people—has a more malicious intent: It’s all a part of the strategy to hobble the new administration’s attempt at accountability and reconciliation.

As obviously craven as it may seem, for many Republicans, it’s a potentially winning approach worth trying. There’s some historic precedent for that. After the South lost the Civil War and the US embarked on a short-lived Reconstruction, while paramilitary groups waged violent campaigns against Black communities and Northern whites who supported the effort, it was the racist politicians and media who helped sanction their destruction. “The government should not be permitted to pass from the hands of the white man into the hands of the Negro,” the Charleston Mercury, a southern paper, wrote in 1867.

Biden is a white man who was put in power not only because of white people but rather because of a diverse coalition that includes Black and Brown people. He represents another chance at reconstruction and another chance to cleanse America of its original sins that experienced a robust resurgence during the Trump administration. There were millions of white people who also heard Biden’s speech and didn’t feel attacked but emboldened and even relieved that after the last four years, there was an opportunity to fight for their own values.