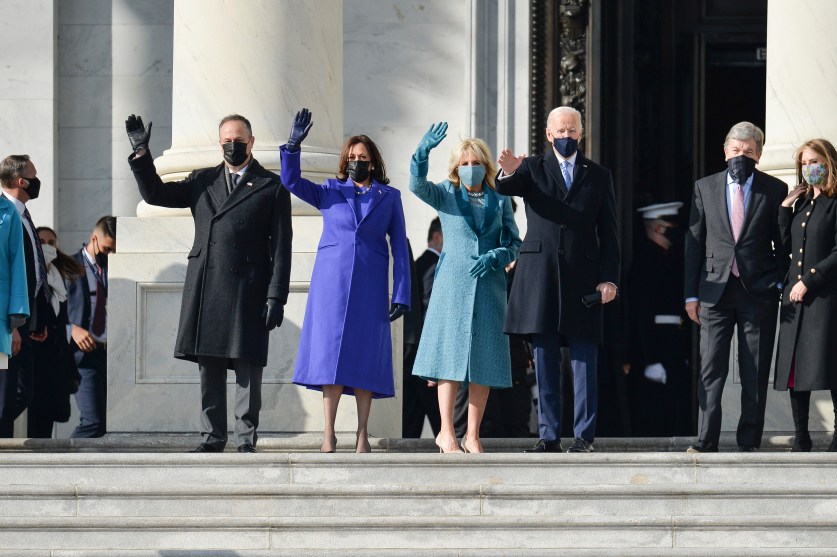 Happy Wednesday and welcome to the inauguration of Joe Biden.

Today’s ceremony looked starkly different from previous inaugurations in light of the pandemic. Unprecedented security measures are in place following the murderous attack on the Capitol exactly two weeks ago. Today, 25,000 National Guard troops—roughly five times the number of service members currently stationed in Iraq and Afghanistan—are patrolling the area.

Donald Trump is, of course, snubbing the festivities. Instead, he spent his final hours in office with a military-style send-off that reportedly failed to attract even Mike Pence. John Kelly, Don McGahn, and Anthony Scaramucci were also among the former White House officials who declined invites to Trump’s farewell.

3:45 p.m. ET: Biden gave Al Roker a fist bump, but I was disappointed not to see Roker hand over his bag of snacks.

3:30 p.m. ET: Biden is setting off on his inaugural parade, albeit without civilian spectators. Drum lines from the University of Delaware and Howard University—the president’s and vice president’s alma maters, respectively—will join the procession.

In other news, NBC’s Al Roker is trying to get the first and second families to speak with him by luring them with their favorite snacks.

Al Roker went on a Wawa run for snacks to convince the new President to walk over to him during the parade #Inauguration pic.twitter.com/EK33wrDcff

1:10 p.m. ET: Take in today’s sweet feeling of relief by mainlining these wonderful memes and reactions:

Bernie Sanders gets to the movie theater nice and early even though he hates sitting through the trailers pic.twitter.com/TuMhTz0jJQ

12:30 p.m. ET: A new whitehouse.gov with normal, non-horrifying policy priorities has finally been installed. One big change: the removal of the Trump administration’s 1776 Commission.

In his first act as president, @JoeBiden leads a silent prayer for the 400,000+ Americans who have died from COVID-19.

The moment @JoeBiden was sworn in as the 46th President of the United States. pic.twitter.com/mq6ffIUynk

.@KamalaHarris is sworn in by Justice Sonia Sotomayor as the vice president of the United States. #Inauguration2021 pic.twitter.com/ECorckECIC

11:40 a.m. ET: Lady Gaga is performing the National Anthem and she is killing it.

Joe Biden walks out onto the stage at the Capitol with his wife, Jill, minutes before he is inaugurated as the 46th President of the United States. pic.twitter.com/gf2WrXAM4p

Joe Biden and Kamala Harris are being escorted by Eugene Goodman, the Capitol police officer who guided the pro-Trump insurrectionists away from senators during the Jan. 6 attack.

10:20 a.m. ET: While we wait for guests to start taking their seats, my colleague Russ Choma has a guide to the mounting financial problems that await Trump as he crosses into civilian life:

Trump will return to a faltering business empire, its troubles magnified by the insurrection at the Capitol that he provoked. His bankers don’t want his business. Business partners are cutting ties. He’s facing looming deadlines to repay hundreds of millions in debt, with few good options for coming up with the cash or refinancing. Meanwhile, the threat of post-presidency legal problems, civil and criminal, has proliferated.

In short, the walls are closing in.

10:00 a.m. ET: More arrivals and a tweet-congrats from Barack Obama:

Congratulations to my friend, President @JoeBiden! This is your time. pic.twitter.com/LXzxGnBAfz

Jon Ossoff and Raphael Warnock are at the inauguration!! I love this!!! pic.twitter.com/HiRZuY8Z6w

Bernie really looks like he's on his way to mail something pic.twitter.com/Ig0w66FPzs

9:20 a.m. ET: Our DC Bureau Chief David Corn is live at the ceremony where guests are starting to arrive.

From beneath the podium where Joe Biden will become president. pic.twitter.com/FkOQiBg4PG

8:35 a.m. ET: Trump is now speaking at his farewell event at Joint Base Andrews, where he organized a 21-gun salute for himself:

Trump gets his 21 gun salute pic.twitter.com/DdPg4pEKL6

BREAKING — It was “the honor of a lifetime,” Trump tells us and mouths “thank you” to the press. He said he just wants to “say goodbye” and “we love the American people.” pic.twitter.com/l5m86NwZpF

Minutes away from Trump’s departure from the White House for the final time @MSNBC pic.twitter.com/NCS8oUHBo4

7:40 a.m. ET: Before the events of the day overtake us,  let’s take a look at the flurry of executive orders Biden is expected to sign after getting sworn in. Those include immediate orders to rejoin the Paris Climate Accord and the World Health Organization, extending key coronavirus financial relief measures such as eviction and foreclosure moratoriums, and ending the Trump’s administration’s Muslim ban.