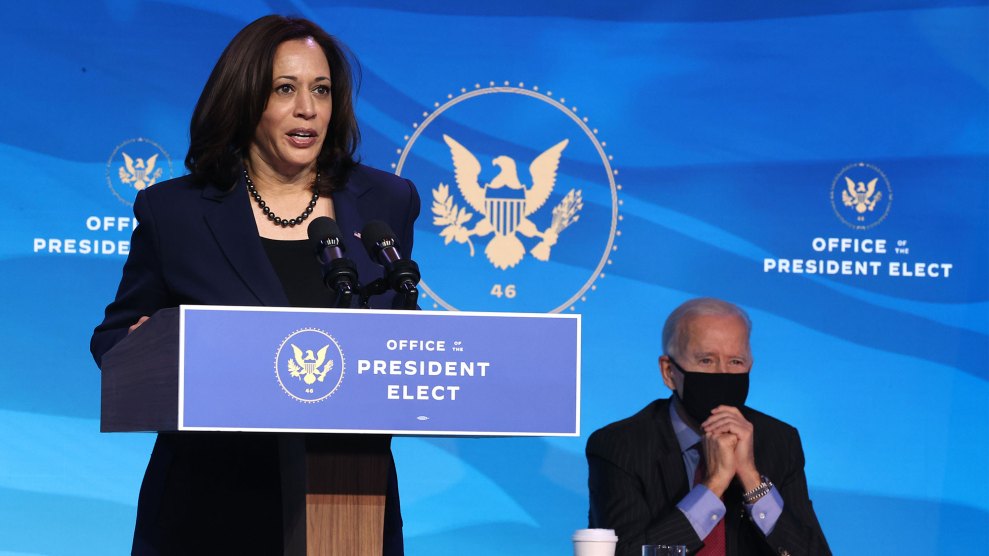 In an interview with Univision on Tuesday night, Vice President-elect Kamala Harris teased a few details of the Biden administration’s immigration plans, which, with Democrats now in control of Congress, will be proposed “as our first order of business.”

Harris told anchor Ilia Calderón that the plan will include “creating a pathway for people to earn citizenship,” though she didn’t specify how. She said that part of their approach will be to shorten the amount of time it takes to obtain green cards and citizenship.

President-elect Joe Biden said last week that he would introduce an immigration bill soon after taking office, but until Harris’ interview, little was known about the plan. These vague details are the first steps in what immigrant rights groups are expecting from Biden: to not only reverse some of the damage of the previous administration but also go a step further now that he has Congress on his side.

Harris said she’s confident Congress will give bipartisan approval to their immigration proposal, especially given the contributions of more than 200,000 essential workers who have Deferred Action for Childhood Arrivals (DACA) and who have been “putting their own lives at risk” during this pandemic. Part of Biden’s plan is to allow people with DACA and with temporary protected status to “automatically get green cards.” Combined, that would mean a path to citizenship for approximately 1 million people.

“In prioritizing a pathway to citizenship for the over 11 million undocumented people living in this country, President-elect Biden is sending a clear message about the values that the incoming administration will prioritize,” said Sanaa Abrar, advocacy director at United We Dream. “Along with our allies, we helped deliver a clear policy mandate to President-elect Biden, and now he and the new Democratic-controlled Congress, led by Speaker Pelosi and Majority Leader Schumer, must immediately pass a bill that gives citizenship to all 11 million undocumented people living in the U.S., protects people, and does not grow the deadly deportation force of ICE and CBP.”

Harris also told Calderón that the new administration will also “put more judges to deal with what we need to do in terms of people arriving at the border to make sure that runs more smoothly and get rid of the backlog.” While this may sound like a good idea on its face, Trump added many immigration judges over the years—and it didn’t lead to a more fair legal process for tens of thousands seeking refuge in the United States. Immigration law attorneys and experts on Twitter were quick to criticize Harris’ proposal.

Harris's comments yesterday about their plan to hire more immigration judges should be concerning to anyone who has followed the way the EOIR has hired immigration judges and BIA members in the last four years. Putting more pieces into this broken machine won't fix it. https://t.co/0t16GYrDXA

Harris noted the administration would provide legal presentation for children arriving at the border so they can receive due process and are treated fairly.

Kids In Need of Defense, an organization that provides legal representation to migrant children, applauded Harris’ assertion that children seeking safety in the United States will have lawyers. “Vice President-elect Harris recognizes that it is virtually impossible for children to navigate the US immigration alone to make their case for US protection,” said KIND president Wendy Young. “Without counsel, children risk being unlawfully returned to their home country and the very dangers they fled. The provision of counsel is a vital step in the protection of these children and a sign that the Biden Administration will be working to restore the United States as a leader in the protection of the most vulnerable.”

Harris added Tuesday that the Biden administration would make sure that all immigrants “regardless of their immigration status” receive the COVID-19 vaccine. Harris kept the details of the plan vague, but she called it “a smarter and a more humane way of approaching immigration.”