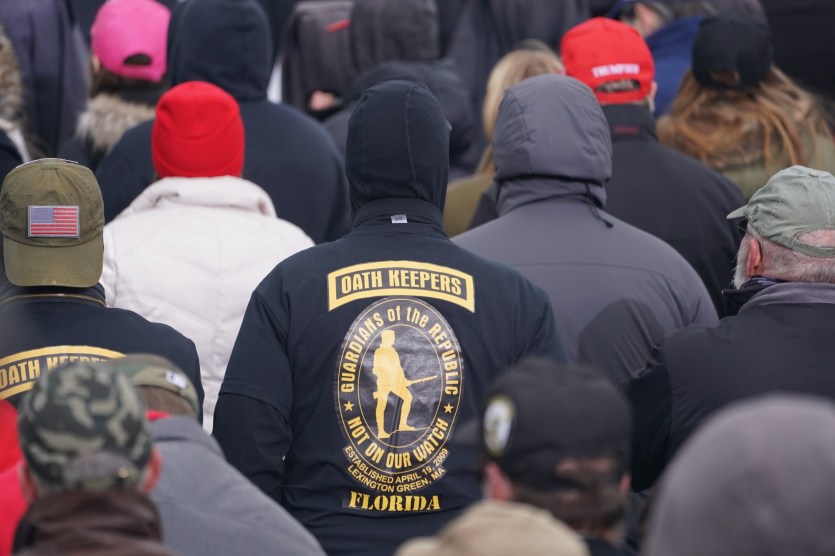 A member of the Oath Keepers in attendance at the Jan. 6 rally in DC that preceded the insurrection at the US Capitol.Bryan Smith/Zuma

Some of those accused belong to the Oath Keepers, which prosecutors have identified as playing a major role in advance planning of the attack. The Oath Keepers are a far-right extremist militia group that actively focuses on recruiting current and former military service members and law enforcement officers into their ranks. Though the Defense Department explicitly forbids military personnel from actively participating in an extremist group such as the Oath Keepers, the militia’s official website includes an “Oath Keeper in the ranks” section which displays the patches of all the military branches—including specific divisions, regiments, and battalions—and law enforcement agencies that the group claims employs its members.

The list predates the January 6 insurrection, but Mother Jones wanted to know if, following the attack, the military or local police agencies had opened investigations into whether they employ Oath Keepers. We contacted 10 military departments and law enforcement agencies, and the answers we received were far from encouraging; none would say if they are investigating the alleged involvement of service members with the Oath Keepers, and just one agency launched an internal investigation to see if any of its members participated in the insurrection.

In all, there are 47 military branches and law enforcement agencies represented on the Oath Keepers website, including nearly two dozen US Army divisions, several Navy SEALS teams, six Marine Corps divisions, three police departments, and one state department of corrections. Some of this could, of course, just be false boasting and the website does not clearly state if Oath Keepers’ members in the ranks are active duty or retired—several of the Army divisions represented on their website are no longer active, such as the 33rd Armor Regiment, which formed in 1941 and was renamed in 2005—but the group’s website says that they are made up of “current and formerly serving military, police, and first responders.”

Mother Jones contacted representatives from all branches of military and law enforcement identified on the Oath Keepers website and asked if there were policies prohibiting personnel from associating with extremist groups like the Oath Keepers, and if there were any current investigations of possible affiliations.

Most agencies responded by citing broad and ambiguous policies that forbid employees from actively participating in any hate or extremist group, but do not define what constitutes one of these groups. Many did not have any specific policies forbidding affiliation with the Oath Keepers or other similar extremist groups like the Three Percenters or the Proud Boys. The Pentagon bars “active” participation in extremist groups, leaving some ambiguity as to whether participation itself is allowed. At a February 2020 congressional hearing, an Air Force official told lawmakers that “mere membership in a white supremacist group is not prohibited.”

Garry Reid, the director for Defense Intelligence for Counterintelligence, Law Enforcement, and Security at the Pentagon told us that “all military personnel, including members of the National Guard, have undergone a background investigation, are subject to continuous evaluation, and are enrolled in an insider threat program. Simply put, we will not tolerate extremism of any sort in DOD.” But a Defense Department spokesperson did not respond to specific questions on whether the department has any open investigation into whether there are Oath Keepers in the ranks currently.

A spokesperson from the Marines also did not respond to a specific inquiry about whether or not there were ongoing investigations into possible Oath Keeper members in the Marine Corps, but issued a similar statement to Mother Jones. “There is no place for racial hatred or extremism in our Marine Corps. Our strength is derived from the individual excellence of every Marine regardless of background. Bigotry and racial extremism run contrary to our core values,” said Marine Corps spokesperson Captain Joseph Butterfield.

The Oath Keepers claim at least six different branches of the Marine Corps have members affiliated with their group. According to the Marine Corps conduct policy, “military personnel may not actively advocate supremacist, extremist, or criminal doctrine, ideology, or causes that advance, encourage, or advocate illegal discrimination, based on race, color, sex, religion, ethnicity, gender identity, sexual orientation, or national origin or those that advance, encourage, or advocate the use of force, violence, or criminal activity.”

Of the agencies and armed forces branches we contacted, only one, the Maryland State Police, made mention of an investigation of the insurrection, stating that the department’s Internal Affairs Division reviewed photos from the insurrection and it “didn’t turn up any evidence of employee involvement.” The MSP did not say if there are any investigations into Oath Keepers in their ranks.

A spokesperson for the Las Vegas Metropolitan Police Department said they were not aware of any employees affiliated with the Oath Keepers and referenced a code of ethics that made no specific mention prohibiting membership or affiliation with extremist groups.

The Chicago Police Department, who the Oath Keepers claim to have membership in their ranks, did not respond for a request for comment. A June 2019 Reveal investigation of police officer ties to extremist groups found that at least one CPD officer belonged to a militia group with ties to the Oath Keepers.

A spokesperson from the Connecticut Department of Corrections referenced an administrative directive forbidding “unprofessional or illegal behavior” that included “association or membership with security risk groups, criminal enterprises, hate groups, or groups of high interest to law enforcement.” But the passage cited also notes that the employee is responsible for seeking out clarification on what associations or memberships are allowed, and the spokesperson said that the department is “not currently investigating any Connecticut DOC employee for being part of Oath Keepers, nor do we have any history of investigations linked to that group.”

So far, no current military or law enforcement officials with known Oath Keeper ties have been arrested for invading the US Capitol, but vets who belong to the group have been. According to court documents, three people belonging to the Oath Keepers—Thomas Caldwell, Donovan Crowl, and Jessica Watkins—planned for nearly two weeks to “forcibly storm the U.S. Capitol” on January 6, using Facebook and Zello, a walkie-talkie app often used by right-wing extremists, to coordinate what to bring and where to meet. Footage of the incursion of the Capitol shows the three, along with several other individuals dressed in paramilitary equipment, “aggressively approaching an entrance to the Capitol Building.” During a detention hearing for Crowl, a federal prosecutor in Virginia said that he’d “been preparing for literal war…because that’s what his organization told him to do.” On Wednesday, all three were indicted by for conspiring to storm the Capitol to try and stop Congress from certifying Biden’s election victory.

Caldwell, Crowl, and Watkins are all military veterans. Caldwell, a 65-year-old Navy veteran from Virginia, is believed to have a leadership role in the Oath Keepers, according to court documents. Both Crowl, a 50-year-old Marine veteran, and Watkins, a 38-year-old Army veteran, are members of the Ohio State Regular Militia, whose members form a subset of the Oath Keepers. The events of January 6 have renewed longstanding concerns of right-wing extremists in the military’s ranks that many researchers, law-makers, and even Department of Defense officials have, for years, warned about and that the armed services and law enforcement departments have failed to address.

Though Caldwell, Crowl, and Watkins are the only Oath Keepers who have been charged so far, pictures and footage from January 6 suggest that many other members were involved. A video included in the charging documents for Caldwell, Crowl, and Watkins shows 8-10 people in paramilitary gear and Oath Keeper paraphernalia at the front door of the Capitol, trying to force their way inside.

Since the insurrection, the Oath Keepers have made no attempt to distance or disavow themselves from the deadly riot. In the days following the attack, the Oath Keepers’ website was shut down; the group claimed that its hosting service, LiquidWeb, “caved to the Loony Left.” The website was restored a few days later and the group had quickly posted a manifesto, written by the group’s founder, Stewart Rhodes, for how it plans to operate under a Biden Administration. “As always, Oath Keepers stands in defense of the Constitution against all enemies, foreign and domestic. What is now being installed is not a constitutional government,” Rhodes wrote. He then explains that the Biden Administration is “an illegitimate regime that has unjustly taken power through massive vote fraud, to install a ChiCom puppet who will do the bidding of a mortal enemy of this nation, as well as the bidding of international elites who are in allegiance and alliance with the CCP as they pursue a common goal of destroying our Republic and enslaving the American people.”

Throughout the post, Rhodes encourages Oath Keepers members to start organizing their own militias at the county and state level and to “keep your powder dry, your head on a swivel, and your gear ready to roll at moments notice.” Though Rhodes explicitly does not call for the initiation of violence, he does remind members that they are committed to defending the Constitution against all enemies and “that means against the communists and deep state traitors who have stolen the White House and stole a false majority in the US Senate, along with their street level terrorist allies, all of whom have already expressed their intent to trample on our rights.”

A day after Rhodes posted the manifesto to the Oath Keepers website, he went on Alex Jones’ Infowars show, where he told his members to “prepare” to defend themselves, insinuating violence. “So many Americans now are running and hiding, that’s not going to do you any good,” he said. “So you need to get together and prepare to defend yourselves.”