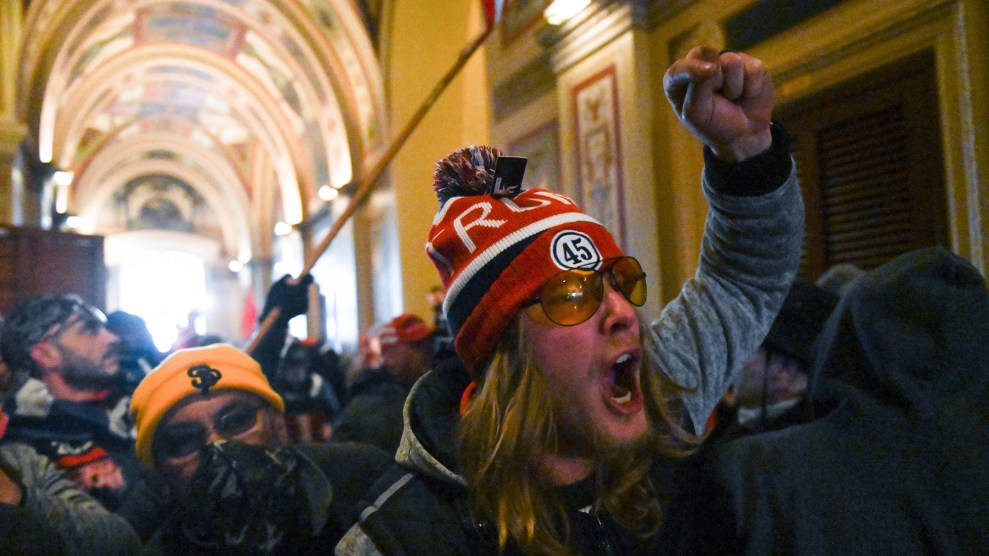 Pro-Trump rioters inside the US Capitol on January 6.Roberto Schmidt/AFP/Getty

Speaking at the “Save America” rally outside the White House yesterday morning, President Donald Trump told thousands of supporters to “walk down to the Capitol,” where members of Congress were about to certify President-elect Joe Biden’s election. Having spent more than two months spewing disinformation about election fraud, Trump advised the marchers, “You will never take our country back with weakness.” Soon afterward, a mob waving Trump flags and wearing MAGA hats overran the Capitol building, emptying the chambers and sending lawmakers into hiding. Yet as congressional Republicans released their first statements about the violence, they largely ignored the president’s role in inciting the crisis.

The vast majority of Republican representatives and senators did not mention the president at all, instead pushing out anodyne statements thanking law enforcement—who were utterly unprepared, at best, for the attack—and condemning violence in broad terms. Several drew a false equivalence between the pro-Trump mob who invaded the capitol and the massive protests against police brutality and racism this summer.

I swore an oath to protect the Constitution and the rule of law. I take that oath seriously. Whether it was the violent thugs who fought with police and stormed the U.S. Capitol building today or the violent thugs of Antifa and BLM who've been assaulting police and attacking…

I proudly back the blue and support law and order, which is why I condemned the violence that took place in cities across the nation this summer. It's a national disgrace to have a mob attacking Capitol Police and engaging in anarchy. This is not what America stands for.

Others claimed that the events of the day did not reflect the nation’s character. “This is not who we are,” Sen. Shelley Moore Capito of West Virginia tweeted. Rep. James Comer of Kentucky wrote, “The outrageous rioting and violence taking place at the Capitol Building is completely unacceptable and not who we are as a nation of law and order.”  “What happened today at the Capitol is disgraceful and un-American,” Sen. Rick Scott (R-Florida) tweeted as rioters waved Confederate flags in Statuary Hall. “It is not what our country stands for.”

While rioters still roamed the halls of Congress, a few Republican senators urged Trump to take action to calm the situation, without directly blaming him for instigating it. Sen. Lisa Murkowski of Alaska tweeted, “Mr. President, tell your supporters to stop the violence. Stop the assault. Now.” In a tweet, Sen. Marco Rubio of Florida told Trump “It is crucial you help restore order by sending resources to assist the police and ask those doing this to stand down.”

Only a small handful of Republican lawmakers laid the mayhem at the feet of the president. Just three Senate Republicans—Richard Burr of North Carolina, Ben Sasse of Nebraska, and Mitt Romney of Utah—called out Trump’s role in instigating the violence in their initial remarks. “Lies have consequences,” Sasse said in a statement released after the riot. “This violence was the inevitable and ugly outcome of the President’s addiction to constantly stoking division.”

“This is what the president has caused today, this insurrection,” Romney told a reporter. Speaking before the full Senate when the session resumed last night, he was unsparing in his criticism of Trump and his colleagues who had enabled the president. “We gather today due to a selfish man’s injured pride and the outrage of his supporters whom he has deliberately misinformed for the past two months and stirred to action this very morning,” Romney said. “What happened here today was an insurrection, incited by the president of the United States.”

Only a few Republican representatives were willing to call out Trump in their statements. “This is not leadership,” Rep. Peter Meijer of Michigan said in a tweet directed at Trump. “We are witnessing total banana republic crap in the United States Capitol right now,” tweeted Rep. Mike Gallagher of Wisconsin, asking the president to “call this off.”

Unacceptable. Enough. Acknowledge Biden as President-Elect and end this madness. Violent rioters laid siege to the nation’s Capitol in an act of insurrection unparalleled in modern times. This is not leadership. https://t.co/to4tupN8YH

We are witnessing absolute banana republic crap in the United States Capitol right now. @realdonaldtrump, you need to call this off. pic.twitter.com/0QGx2PlXFY

Members of Congress who supported Trump’s campaign to undo his election loss condemned the mob before returning to the decertification effort that had sparked the day’s violence. When the Senate reconvened, Scott voted to decertify Pennsylvania’s electoral college results—joining a group of eight Republican senators who voted to overturn election outcomes in Arizona or Pennsylvania. Some senators seemed to suggest that the rioters had been trying to stop their effort to undermine Biden’s win. Sen. Cynthia Lummis (R-Wyoming), tweeted Wednesday afternoon that “an attack on the Capitol is an attack on democracy” before voting to toss out Pennsylvania’s votes. Sen. Cindy Hyde-Smith (R-Mississippi) also used the day’s events to justify her decision to reject the results of the election. “The mobs will not stop the Senate from fulfilling its constitutional duty,” she said in a statement.

When it came time to vote on the objection to Arizona’s election results in the House, 121 GOP representatives voted to overturn the will of the voters. One of them was Rep. Mo Brooks of Alabama, who had been spreading conspiracy theories about the election for weeks. He issued a statement in which he “unequivocally condemned the violent mobs who stormed the U.S. Capitol,” before doubling down on the claim that “our election system has major, systemic flaws that Socialist Democrats egregiously exploited in 2020.” Hours earlier, he had appeared at Trump’s rally, exhorting the crowd, “Today is the day American patriots start taking down names and kicking ass.”