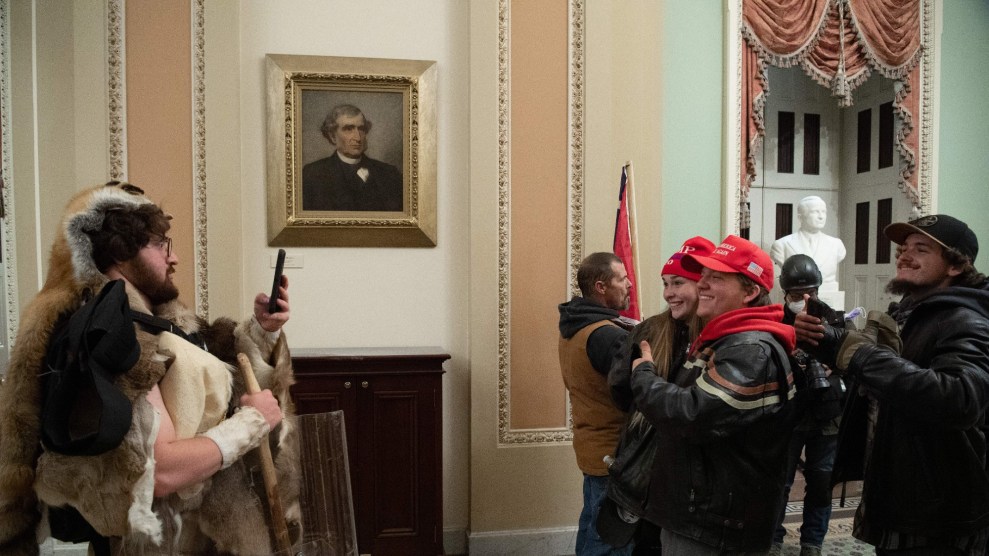 In the days after a violent mob stormed the Capitol fueled by the lie that the presidential election had been stolen, a stream of photo and video evidence of what individuals in the mob were actually doing trickled out. One man smiled and waved for a news photographer as he stole House Speaker Nancy Pelosi’s (D-Calif.) lectern, another one preened as he sat back with his feet on her desk. One woman posted a series of Instagram photos detailing her participation in the insurrection and bragged about being there. And who could forget Derrick Evans? He’s the Republican delegate in the West Virginia legislature who livestreamed the break-in and, lest anyone mistake him from someone else, was easily identified by police because he shouted “Derrick Evans is in the Capitol!” when they breached the building.

There are many ways to contextualize this mayhem, but one of the most striking ones was how it was an astonishing display of one of the vilest aspects of white privilege. As this group of Trump supporters were committing federal crimes and participating in a violent insurrection designed to halt the democratic process of certifying President-elect Joe Biden’s win in order to reinstall a demagogue as president, they stopped to document their progress and left behind a trail of evidence for investigators. Apparently, the idea that there could be negative consequences for their actions never even occurred to them.

Paradoxically, violence against Black people routinely goes unpunished unless there is documented evidence—and even then, an alarming number of conservatives will justify what, say,  the police officer was doing. Consider George Floyd, whose May 2020 death may have gone unnoticed by the public if there hadn’t been a bystander filming his final moments at the hands of white police officer Derek Chauvin. Every time a Black person’s death goes viral, I am reminded of the countless other lives that were lost quietly and without an uproar, for many reasons but mostly because there was no way to actually see what had happened.

There’s a staggeringly simple reason the rioters felt comfortable about wearing their work badges, or the sweatshirts listing the phone number to their small business, or, in a notable case, their Team USA jacket from the 2004 Olympics, while they committed serious crimes. When it comes to punishing systemic white political violence, the United States has a dismal record.

That’s not to say that white people who commit atrocities never face prosecution or some form of justice. Timothy McVeigh, who bombed a federal building in Oklahoma killing 180 people in 1995, was executed by the federal government in 2001. Dylann Roof, who murdered nine Black churchgoers in Charleston, South Carolina, in 2015, is awaiting execution on federal death row. But consider the ghastly scope of the crimes that resulted in the death sentences for McVeigh and Roof. Extreme acts of white violence are treated as isolated incidents fueled by individual hatred, rather than as evidence of a deep systemic rot eating away at our increasingly fragile democracy.

A week after Donald Trump encouraged a mob of his supporters to march on the Capitol, he was impeached. While the House was debating the impeachment articles filed against Trump, Rep. Steve Scalise (R-La.), most notable for referring to himself as David Duke (a former grand wizard of the Ku Klux Klan) without the baggage, had the gall to quote the indelible words of Abraham Lincoln’s second inaugural address. In March 1865 the Civil War was all but over and Lincoln used this speech to unite the fractured country:

“‘With malice toward none; with charity for all; with firmness in the right, as God gives us to see the right, let us strive on to finish the work we are in; to bind up the nation’s wounds; to care for him who shall have borne the battle, and for his widow, and his orphan—to do all which may achieve and cherish a just, and a lasting peace, among ourselves, and with all nations.'”

Six weeks after imploring the bitterly divided country to set aside differences, Lincoln was shot and killed by a Confederate sympathizer. The period of Reconstruction that followed was doomed from the start, as white Southerners were more concerned with maintaining white supremacy than repairing the fractured society by including the recently freed slaves and the North. Instead of healing and a creating the foundation for a more positive future, white racists embarked on a campaign of violence and intimidation, and former Confederate generals were barred from running for public office for only a short period of time.

From then on, white supremacists routinely used violence to maintain their power. In 1898, the only successful coup d’etat in American history occurred in Wilmington, North Carolina. A mob of white supremacists conspired to overthrow a democratically elected multiracial government. When the violence was all said and done, 60 people had been murdered and the brand new government was replaced with white supremacists. Much in the same way that some leaders in today’s GOP attempted to place the blame for the Capitol attack on Antifa, the Wilmington coup plotters blamed Black people, accusing them of starting a race riot.

Those responsible for the Wilmington coup were never held accountable. Instead, they went on to hold elected positions.

In hindsight, it’s clear that Lincoln’s olive branch to the South didn’t result in unity, but rather a capitulation that allowed the Confederacy to continue, just under a new name. That’s what makes Scalise’s invocation of Lincoln so egregious—he wasn’t really asking for the restoration of trust between the two parties, but rather for the unconditional surrender by one of them.

That’s what makes Scalise’s invocation of Lincoln so egregious—he wasn’t really asking for the restoration of trust between the two parties, but rather for the surrender by one.

In the weeks to come, federal law enforcement will continue to pursue individual insurrectionists—a monumental task made easier with the presence of photographic evidence provided by the perpetrators, plus their defiance in not wearing masks—and arrests for violent entry and threatening a law enforcement official are likely to be in the hundreds. As for the politicians who incited them? Well, that’s a different story. As the hundreds of lawmakers who were subject to a violent attack just a week before, debated the merits of punishing Trump, the man who bears most of the responsibility, scores of white Republican lawmakers had the audacity to deliver smug, smarmy, and disingenuous speeches that ranged from calling the impeachment political posturing, to suggesting that while Trump was responsible, it was simply too late. Only the belief that you will face no consequences—or rather that the most serious consequences you would face would be from voters who kick you out—would enable Republicans to behave so heinously just one week after an insurrection.

Many in the Republican Party, such as Reps. Matt Gaetz (R-Fl.) and Louie Gohmert (R-Tex.), balked at the suggestion of accountability. Outraged by the injustice, they accused Democrats of trying to divide the country, despite being the party that fomented and encouraged the very violence they were demanding everyone move beyond. They grotesquely conflated last summer’s Black Lives Matter protests with an armed white insurrection. In a truly dazzling example of unscrupulousness, they implied that Black protesters from the summer’s racial justice demonstrations in effect forced Wednesday’s mob to breach the Capitol building. (Forbes reports that on June 1 alone, “more than five times the number of people were arrested” in Washington DC that on the day of the Capitol insurrection.) Gaetz and Gohmert seemed not to realize that asserting that mob violence is the reaction to the advancement of Black people is quite the tell.

For the 197 Republicans who refused to impeach the president, there was no contrition, much less acknowledgement of the dangerous lie they supported and amplified that led to their having been forced to hide from some of their own constituents who were rampaging in the Capitol building. Meanwhile four rioters and one police officer were killed.

In the end, only 10 Republicans chose to break with the President and vote yes to impeach Trump again. Several media reports suggested that there were more Republicans who were on their side, but they were fearful this would imperil their lives or the lives of their families. (Someone should tell them about the death threats liberal lawmakers regularly receive.) Their cowardice in the face of white violence will certainly do nothing to stop it. Meanwhile, the lawmakers who played along with Trump’s insistence that the election was stolen from him are unlikely to face any real consequences, save for some cyberbullying and the loss of some contributions from corporate PACs.

Though the House ultimately voted to impeach, who knows what will happen during the Senate trial. Senate Majority Leader Mitch McConnell (R-Ky.) has expressed some openness to convicting Trump but will not reconvene the Senate early to begin proceedings. Will Trump remain the only president to get impeached twice? Will he also be the only president to be convicted? Or will he just get away with doing terrible things as he’s always done, except as a twice-impeached ex-President? Once more, enjoying the actions-without-serious-consequences benefit of white privilege.

As appalling as it was to watch Trump supporters who had hailed themselves as the embodiment of law and order, and freedom and patriotism, attack the seat of government in order to violently overturn a democratic election, the aftermath was almost as bad. In the following days, many outspoken members of Republican Party still had the gall to avert their collective eyes from the destruction they created and boldly declare that it would be unfair if they were to be held to account for the havoc they’d created. Their calls for “unity and healing” were merely code for “Let me continue to run roughshod over our democratic institutions.” It was a bold play, designed to maintain the time-tested status quo of not punishing certain vast swaths of mainstream right-wing violence. And if history is any indication, after a bit of public handwringing, the Republicans just might get away with it.