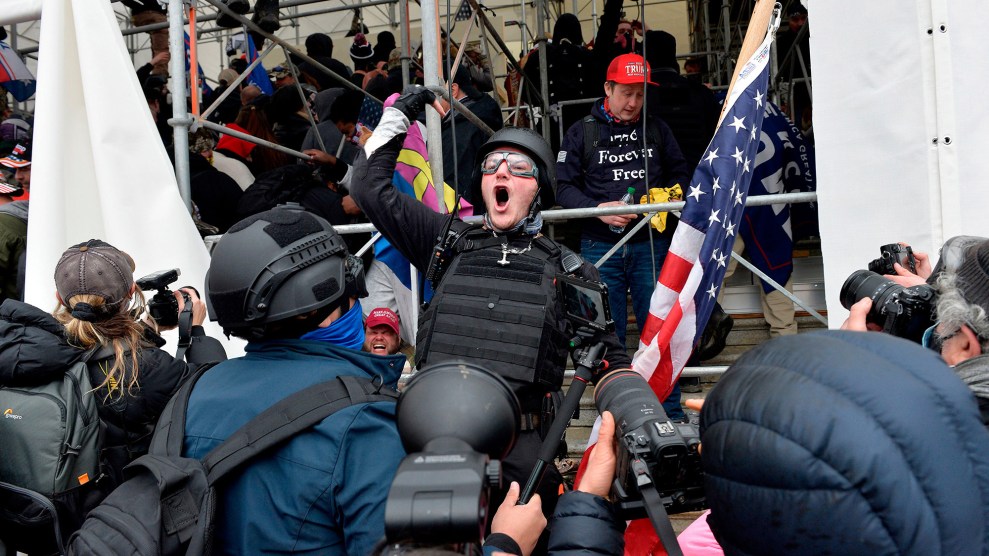 A man calls for Trump supporters to storm the US Capitol.Joseph Prezioso/AFP/Getty

In the aftermath of the violent insurrection against Congress on Jan. 6, many national security experts were stunned by what looked like a catastrophic failure to prepare by law enforcement agencies, foremost the Capitol Police. But the idea that the broad assault came as a surprise defied credulity, and concerns quickly focused on whether the attacks by enraged mobs of pro-Trump rioters were more orchestrated than was generally understood.

For several weeks before the siege, the national security community was “swimming in threat intel” about far-right Trump partisans with potentially dangerous plans, a senior US law enforcement official told me. Some of the threats metastasized online. According to a social media analysis cited in the New York Times, the phrase “Storm the Capitol” was mentioned 100,000 times across various platforms in the 30 days preceding the attack. Violent far-right extremist groups exchanged ideas about concealing weapons and using guerilla tactics to target political enemies. On Twitter, President Trump himself spent weeks inciting violence focused specifically on Jan. 6, the day Congress would certify Joe Biden’s election victory. The day prior to the attack, a FBI field office in Virginia issued a stark internal warning about extremist talk of going to “war” in Washington, including individuals sharing a map of the Capitol complex.

Further reporting since the insurrection has heightened concerns about the failure of law enforcement leadership, according to interviews with current and former national security officials. Among the mob and those who invaded the Capitol there was widespread use of two-way radio communications, tactical gear, chemical munitions, and what law enforcement officials believe may have been a diversionary planting of pipe bombs. Particularly grim was the participation by some police officers and ex-military personnel in the siege. Did agency leaders installed by Trump or who were sympathetic to his lies about the 2020 election look the other way from looming danger on their radar?

“Either they were complicit or willingly ignorant of what they needed to do to prepare,” says Marisa Randazzo, a leading threat assessment professional and former chief research psychologist for the US Secret Service. “We saw Washington prepare for the Black Lives Matter protests last summer with National Guard presence that was significant, in numbers and optics. Here, there was a noticeable absence that never should’ve happened.”

According to the Washington Post, several Capitol Police officers have been suspended and more than a dozen others are under investigation for suspected involvement with or inappropriate support for the violent demonstrations. Democratic Rep. Tim Ryan of Ohio, who helps oversee Capitol operations, told reporters that one of the suspended officers took a selfie with a rioter and another wore a “Make America Great Again” hat while “directing“ members of the mob. But it wasn’t just the rank and file: two Capitol Police officers who are Black told BuzzFeed reporter Emmanuel Felton that they endured racist verbal attacks while “fighting off an invading force that their managers had downplayed and not prepared them for.” The officers further described facing “a heavily trained group of militia terrorists” and said the crowd included some police officers from elsewhere in the country who flashed their badges as they joined in the breach of the Capitol. “Our chief was nowhere to be found, I didn’t hear him on the radio,” said one of the Capitol Police officers. “One of our other deputy chiefs was not there…You don’t think it’s all hands on deck?”

Based on her decades of experience, Randazzo says that “most people are in law enforcement for the right reasons, and are truly there to protect and to serve.” But the events of Jan. 6 have left her and other experts deeply troubled, with no end in sight to the danger.

Trump must be seen as “the operational leader of this domestic terrorism effort,” says a former Homeland Security official.

“The amount of online activity focused on the inauguration is concerning,” the senior US law enforcement official told me, including talk of “coordination for travel, strategizing about weapons and tactics, and other aspects. It’s not that there are many talking openly this way, but you only need a few.” On Monday, members of Congress were briefed by the Capitol Police about additional violent plots targeting Washington, and the FBI warned of “armed protests” being planned for all 50 state capitols as well DC in the run-up to the inaugural. The Department of Homeland Security moved up official emergency planning for Jan. 20, thousands of National Guard troops have begun mobilizing for Washington, and federal leaders are planning for robust interagency coordination led by the Secret Service.

But what about sympathies for Trumpism among those with security responsibilities? Last August, former FBI special agent Michael German authored a report for the Brennan Center for Justice focused on the unknown extent but clear existence of extremist views among American law enforcement. “The continued presence of even a small number of far-right militants, white supremacists, and other overt racists in law enforcement has an outsized impact on public safety and on public trust in the criminal justice system and cannot be ignored,” German wrote. There has also been mounting evidence that police officers around the country have been caught up in apocalyptic pro-Trump conspiracy theories stemming from the dangerous QAnon movement, which Trump last fall refused to disavow even after it had been designated by the FBI as a domestic terrorism threat.

“My concern about all of this,” says Randazzo, “is that we have protective systems in place for different parts of our democracy that we’ve normally been able to rely upon, and that has to be called into question now.” That includes finding out whether the events of Jan. 6 were “not just a failure of individuals, but possibly a willful or planned failure.” It’s an unprecedented situation, she says, including an urgency to gauge the reliability of personnel involved in the inauguration, from Trump’s chronically leaderless Homeland Security department to the military. Vetting for the short-term could be accomplished to some degree with interagency cooperation and teaming with trusted partners, Randazzo says, and through spot checks of personnel records and social media activity among people in key positions: “It’s sort of the personnel equivalent of two-factor authentication.”

With a clear and present danger of further violence in state capitols and the nation’s capital, it may be that incitement from the president himself remains the gravest threat, despite his recent deplatforming by tech companies. Remarkably, some national security experts who have sounded the alarm about Trump’s many months of deliberately inciting violence are now talking about the end game of his presidency in the stark terms of counterterrorism. Trump must be seen as “the operational leader of this domestic terrorism effort,” said Juliette Kayyem, a former assistant secretary of Homeland Security, who was among the first experts to call out Trump’s use of terrorist tactics. “He tells them where to go. He tells them what to do. He tells them why they’re angry. So we need to start at the top, like with any counterterrorism effort, which is total isolation of the president of the United States. Impeachment, yes. Twenty-fifth amendment, yes. Deplatforming, yes. No money, no access to campaign funds…What we have to make sure [of] is that Donald Trump does not have a second act.”

This is crucial, Kayyem told me, for shaming and tamping down far-right extremism that has taken hold among some pro-Trump elements in law enforcement. “These ideologies are given voice and comfort by the president, so there’s a fearlessness with some of these guys in law enforcement, that they would post pictures or go to a rally and do something so illegal and think that there are no consequences. All of that, I think, is tied to the radicalization that is unique to Trump.”

Kayyem acknowledges that her language sounds harsh—but she is adamant that counterterrorism is the necessary framework for confronting the peril the nation is now facing, both in tactical and symbolic terms. “This is how to think about it, no forgiveness, not now,” she says. Figuratively speaking, she adds, that includes “total decapitation.”