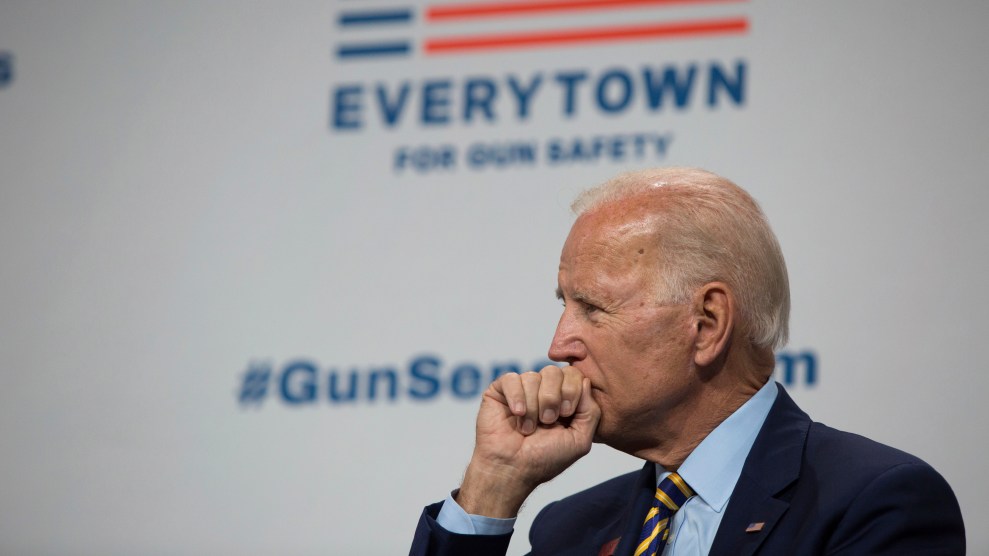 In a week when Congress debated the second impeachment of a former president, and the current president remained laser-focused on a pandemic and the ongoing recession, President Biden’s top domestic policy adviser turned her attention to gun violence. On Wednesday, Susan Rice and White House senior adviser Cedric Richmond met virtually with leaders of some of the nation’s largest gun violence prevention groups, including Giffords, Brady, Everytown for Gun Safety, and Moms Demand Action. On Thursday, Rice held a listening session with the families of the victims of the 2018 shooting at Marjory Stoneman Douglas High School in Parkland, Florida, which marks its third anniversary this Saturday.

These early meetings were a welcome sign of progress for gun control advocates, who had begun to fret that COVID-19 had pushed their issue far down the administration’s to-do list. But to some, the meetings seemed tone-deaf. None of the White House’s early invites were extended to the leaders of Black-led gun violence prevention groups who focus on addressing everyday gun violence—even as an alarming spike in shooting deaths has devastated communities of color during the pandemic. “The hegemony of white-led gun [control] groups in this movement is racist,” says Mike McBride, a Black pastor who helps direct the organizing network Faith in Action and is a national leader in the movement to address urban violence with public health approaches. “The reality that the Biden administration would convene a meeting on gun violence without any of us there, knowing the unfortunate rise of gun-related shootings and deaths in Black communities in the age of COVID, is troubling.”

Some activists believe Biden’s team is making more of an effort than past administrations to address urban shootings; ahead of his inauguration, his team tapped Amber Goodwin, who leads a group focused on gun violence in communities of color, to coordinate policy-focused calls with activists. Biden spokesperson Michael Gwin said in a statement that “[t]he administration will continue in the coming days to engage with, and consult, a wide cross-section of groups working to end gun violence” and promised the “White House is going to build a broad coalition of support to get it done.” But the tension over this week’s meetings speaks to the demands that the gun violence prevention movement has placed on Biden—demands to be more inclusive and prioritize ending Black deaths as much as white ones.

The political dynamics at play are very different from the ones Biden navigated as Obama’s vice president when he tried to pass gun control in the aftermath of the 2012 Sandy Hook massacre. At the time, Black activists, including McBride, criticized Biden for focusing too much on white kids dying in school shootings and not nearly enough on Black kids dying from gang-related shootings. In the intervening years, the movement has broadened its lens, and Biden’s campaign signaled it had, too. And though the White House has yet to take action on its promised gun control agenda, activists remain cautiously optimistic that the Biden administration will fight against gun violence in all its forms.

Biden’s record of championing stricter gun laws spans three decades, something he’d often tout on the campaign trail with some variation of this sound bite: “I’ve taken on the [National Rifle Association] and beaten them—twice.” In the mid-1990s, then-Sen. Biden led his chamber to pass bills that established the federal background check system and a temporary 10-year ban on assault weapons. Both victories had been won at a time when siding with the NRA was a bipartisan affair—and achieved only by uniting Democrats and Republicans against “criminals,” the era’s common enemy. Case in point: The assault weapons ban was passed as part of the 1994 crime bill that is now blamed for contributing to America’s mass incarceration crisis.

Those political dynamics followed Biden to the second term of his vice presidency as he directed the White House’s response to the Sandy Hook tragedy. Biden’s effort was led by his chief of staff, Bruce Reed, a former Clinton domestic policy adviser whose qualifications for the project, according to the White House’s website, included his work in crafting the 1994 crime bill that helped “law enforcement bring down the rate of violent crime in America.” As the vice president’s office considered policy proposals, it invited police officers, firearms retailers, and even the NRA into the White House to weigh in. Civil rights organizations received minimal attention from the White House, according to people involved with the negotiations at the time. To address the everyday urban gun violence, President Obama recommended cities hire more police.

Biden tried to strike a bipartisan deal on expanded background checks. This time, the NRA beat him: The measure failed in a filibuster as four Senate Democrats sided with their Republican colleagues to kill it. But from its failure sprang a drastic political realignment—one fueled by suburban voters’ desires to see Congress enact tougher gun measures and Democrats’ willingness to embrace them. Support for measures like universal background checks has grown over the last decade: Nearly 60 percent of all voters—and 85 percent of Democratic voters—support stricter gun laws, according to a November 2020 Gallup poll. None of the Democrats serving in Congress today have an “A” rating from the NRA, down from a quarter of them back in 2010. “It’s led to an NRA and a gun lobby that’s weakened—we’re winning the political argument,” says Peter Ambler, the executive director of gun violence prevention group Giffords. “There’s nothing more popular and unifying than universal background checks.”

But to some activists fighting against urban gun violence, these changing political winds didn’t include them. They believe the demands for background checks and assault weapons bans reflect a movement forged by high-profile mass shootings, which represent only 0.2 percent of gun deaths. Many advocates fighting against everyday shootings also want the government to invest much more in social services like affordable housing, stable employment, and medical care that can help limit the risk factors that lead to violence. “The problem is some communities are already saturated with firearms,” says Greg Jackson, the national advocacy director of the Community Justice Action Fund, a nonprofit focused on addressing gun violence in communities of color. “It has to be a comprehensive strategy that doesn’t just focus on the hardware.”
A reckoning had been stirring since Biden’s last effort at gun reform failed. “The blinders fell from our eyes that day,” says Shannon Watts, the founder of Moms Demand Action, and she credits the failure with broadening her grassroots group’s focus. But the shift really picked up steam in the months after the 2018 Parkland tragedy, when the student survivors who commanded the media’s attention tried to redirect the spotlight to young Black activists who were organizing to stop gun violence in their communities. And the nationwide protests in the wake of George Floyd’s killing in 2020 helped cement the message that many Black movement leaders had been advancing for years: Investing in police and prisons won’t solve the problem of violence. “Our organization stepped out there to say police violence is another form of gun violence,” Jackson says. He recalls “a big divide” across the movement at first, but they all eventually rallied around the stance. “I knew a lot of organizations didn’t necessarily want to take that stance, but they could not avoid this moment,” Jackson recalls.
“Giffords and the gun violence prevention movement as a whole have been more responsive to the lived experience of folks who confront the gun violence epidemic in their daily communities,” Ambler, the group’s executive director, says. “In the past year, we’ve gotten a very clear understanding of the pervasiveness of gun violence—the epidemic of gun violence that traumatizes Black and brown communities, as well as the well-established nexus of gun violence and extremism.”
The movement now calls for an “and” approach that prioritizes stricter gun laws alongside the investment in community-based programs. When Biden accepted the Democratic nomination for president last summer, he also signaled he would take that path. Biden’s campaign platform included universal background checks and an assault weapons ban alongside a $900 million investment in “evidence-based interventions” across 40 cities with the highest homicide rates. The Democratic Party’s convention included a 10-minute tribute to gun violence prevention that paid equal homage to victims of mass shootings and everyday gun violence.
The campaign’s advisory committee showed a similar balance. Chairs included Fred Guttenberg, who lost his daughter in the 2018 Parkland shooting, Reygan Cunningham, a consultant who helped Oakland drastically reduce its gun violence through community interventions, Joseph Sakran, a Baltimore trauma surgeon who survived a shooting as a teen, and Art Acevedo, the Houston police department chief who received national attention when he marched alongside Black Lives Matter protesters last summer (but also received scrutiny for his department’s record on police violence). Goodwin, the founder of the CJAF where Jackson works, led the Biden transition’s outreach to gun violence prevention groups, arranging calls before the inauguration with activists and scholars to hear policy recommendations. Those calls included nationally renowned experts focused on urban gun violence, including McBride and David Kennedy, a scholar who helped cut inner-city shootings in Boston in the 1990s. McBride also joined a Zoom call with White House senior adviser Richmond during the transition period and emphasized the need to focus on ending the killings of young Black men.
But since Biden reached the White House, McBride has not had an audience with the president’s staff. “We’ve made lots of requests” for meetings, says McBride. “It’s very frustrating because many of them know our work.”
In a readout of Wednesday’s meeting with national gun control groups, the White House said attendees discussed “commonsense steps that can be taken to make our communities safer,” including expanding background checks and investing in community-based violence intervention programs. “My impression is that the Biden administration is looking at [gun violence] from a lens of social justice” while also prioritizing stricter gun laws, says Watts, who attended the Wednesday meeting. “It is the strongest gun safety administration in history.”
For now, activists remain cautiously optimistic. Historically, the federal government hasn’t focused on the types of comprehensive reforms that have been shown in some cities to reduce urban shootings that mostly affect people of color, according to Kennedy. “The federal government has never taken this seriously or made it a priority,” he says, adding that he hopes Biden’s administration takes advantage of “a critical opportunity to get this right.”
Jackson said he’s encouraged by the engagement he’s seen from the administration on the issue, especially the campaign commitment of $900 million to comprehensive programs. But “it’s still early,” Jackson adds. “We haven’t seen any dollars, no pen to paper yet.”
This piece has been updated to include a comment from the White House.