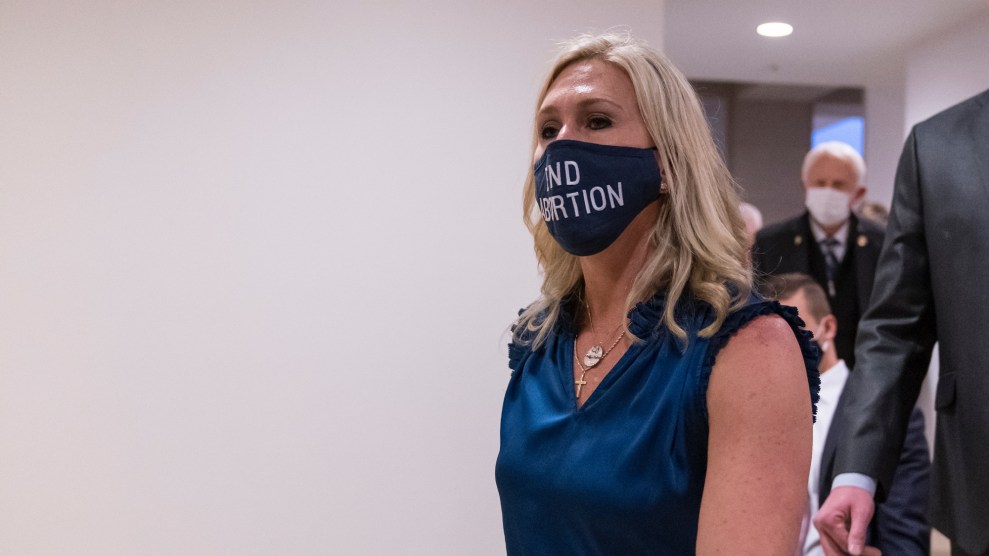 With the House of Representatives preparing for a vote to strip committee assignments from Rep. Marjorie Greene, the assassination-encouraging, mass-shooting-denying, conspiracy-theory-swilling, anti-semitic, 9/11-truther Republican from Georgia, the congresswoman sent out a fundraising letter on Thursday morning striking a defiant tone—and seeking cover in false attacks on Democratic Reps. Alexandria Ocasio-Cortez, Ilhan Omar, and Rashida Tlaib.

At a Wednesday closed-door meeting of the House GOP caucus, Greene did apologize for her previous support of QAnon conspiracy theories, earning a standing ovation from some of her fellow GOPers. And on Thursday, as the House began debate, she attempted to mount a limited retraction, saying she no longer believes the QAnon nuttiness and declaring that 9/11 “absolutely happened” and that school shootings are indeed real. But she also decried those who “crucify me for words that I said and I regret a few years ago.” And she claimed the media are “just as guilty as QAnon” in mixing “truth and lies.” She did not address her previous comments that supported violence against prominent Democrats, and instead tried to present herself as someone who had made a slip or two and had learned her lesson. “These are words of the past,” she said.

The cup-rattling email Greene zapped out a few hours earlier had a much different tone. It displayed absolutely no remorse. It contained no acknowledgement of her past falsehoods or other bigoted, worrisome, and dangerous statements. Instead, Greene blamed her current predicament entirely on—you guessed it—liberals, Democrats, and unnamed elites.

“The liberals here in Washington, D.C., are entirely out of control,” she proclaimed. “They will be holding a vote to expel me from any legislative committees because I dared to stand up for you instead of the D.C. elites.”

“This is all retribution,” she asserted, “because they know I still question the results of the 2020 Election and I filed my bill to impeach Joe Biden last month. This is how the swamp treats people who stand up to them, because we work for YOU.”

Her takeaway: She had done nothing wrong, she was a victim, a martyr for the conservative cause—and for Donald Trump. In her mind, the recent reporting revealing her odious positions and remarks—which included endorsing calls to kill Barack Obama, Hillary Clinton, and Nancy Pelosi—and the subsequent criticism was all just a plot against her. In short, it’s another conspiracy theory, and this time she’s the victim.

As proof, Greene cited Ocasio-Cortez, Omar, and Tlaib, insisting that a double standard has allowed them to go unpunished for inappropriate conduct. But to make her case, she relied on—and spread—disinformation.

In smearing Ocasio-Cortez, Greene said that she had “encouraged protestors to “Punch a cop.” No, Ocasio-Cortez did not. In 2019, about a thousand demonstrators marched in Brooklyn as part of a series of actions protesting brutality from police who patrol New York City’s subways. Some in the crowd, according to the New York Post, chanted, “punch a cop,” and other participants evaded transit fares to raise a point about the criminalization of poverty. Ocasio-Cortez’s connection? She sent a tweet saying, “Ending mass incarceration means challenging a system that jails the poor to free the rich. Arresting people who can’t afford a $2.75 [subway] fare makes no one safer and destabilizes our community. New Yorkers know that, they’re not having it, and they’re standing up for each other.” Her message said nothing to encourage attacks on police.

To attack Omar, Greene claimed she had “has downplayed the 9/11 attacks as ‘some people did something.'” This is a false charge that conservatives, including Rep. Dan Crenshaw (R-Texas) and Fox News personalities, whipped up against the Minnesota congresswoman after her 2019 speech to a Muslim rights organization. While Omar’s words may have been ambiguous, they were meant to highlight how anti-Muslim blowback after 9/11 had battered the community. They were clearly not an attempt to dismiss the horrific attack.

With Tlaib, Greene insisted she has “known ties to terrorists in Hezbollah”—an inflammatory accusation that mischaracterizes reality. In 2019, Tlaib did pose in a photograph with a Palestinian activist who had praised the leader of Hezbollah. Given that political movement’s ties to violence, the picture sparked controversy and criticism. But that’s a far cry from Tlaib being directly linked to terrorists.

In her e-mail, Greene was desperately trying to change the conversation—and raise some cash. After touting her victimhood and pulling in some $300,000 on Wednesday, she was still at it. While she may have been willing during the House debate to eat a small portion of crow to retain her committee assignments, her refusal—in this fundraising letter and on the House floor—to admit and disavow her previous support of violence suggested she was still playing footsie with reckless extremism.

In the email, Greene ran a common play for folks caught making despicable statements: she framed the controversy as nothing more than a matter of opinion. “I am duly elected to hold this office,” she wrote, “and they have no right to punish me for exercising my First Amendment Rights, no matter how much they disagree.” She did not seek to defend her comments. She did not mention a single one specifically. Instead, she tried to cast herself as a free-speech champion under siege from, as she put it, the “DC Swamp.”

With this email, Greene is monetizing the notoriety she’s gained by promoting unhinged and ugly perilous statements and notions. These positions may cost her her committee assignments, but they have gained her a following willing to pony up. “Please remember, they are coming after me because I am standing up for you,” she wrote in this email. This is Greene’s way of telling conservative and Republican contributors “I am you.” What’s most dangerous—and a problem for the GOP—is that many of them agree.