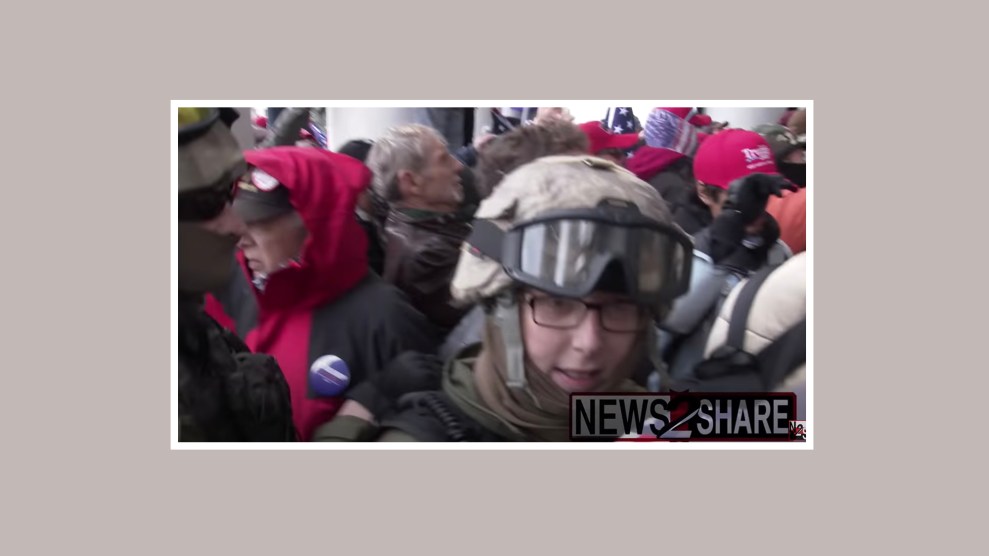 From footage at the Capitol on Jan. 6, as cited by US prosecutorsMother Jones illustration; Youtube

As the US Senate conducts the trial of former President Donald Trump for inciting the deadly insurrection of January 6, evidence continues to emerge that numerous participants in the assault on the Capitol explicitly took their cues from him. As documented in a recent Mother Jones investigation, at least 13 people charged with crimes related to the insurrection—including several caught on video in violent confrontations—said that Trump had incited them to act. A new court filing sheds light on another alleged insurrectionist who looked to Trump for direction: Jessica Watkins, an Ohio militia leader and “dues-paying member” of the far-right extremist Oath Keepers, who talked in chilling terms about targeting Congress.

After the November presidential election, according to a pretrial detention memo filed by federal prosecutors on Thursday, Watkins communicated by text message with an alleged recruit about mobilizing to stop a “Deep State” coup from making Joe Biden president. She wrote of the need to “fight, kill and die for our rights,” according to prosecutors, and she made clear who was compelling her in that mission:

Watkins indicated that she was awaiting direction from President Trump. Her concern about taking action without his backing was evident in a November 9, 2020, text in which she stated, “I am concerned this is an elaborate trap. Unless the POTUS himself activates us, it’s not legit. The POTUS has the right to activate units too. If Trump asks me to come, I will. Otherwise, I can’t trust it.” Watkins had perceived her desired signal by the end of December. In a text exchange with Co-defendant Donovan Crowl on December 29, 2020, she informed, “[w]e plan on going to DC on the 6th” because “Trump wants all able bodied Patriots to come,” and how, “[i]f Trump activates the Insurrection Act, I’d hate to miss it.”

The memo further detailed alleged plans by Watkins and other Oath Keepers to train for “urban warfare” ahead of the presidential inauguration and to arm a QFR, or “quick reaction force” to be stationed nearby and potentially join a battle at the Capitol on January 6. In a photojournalist’s footage from the insurrection cited by prosecutors, Watkins and others in a group of about a dozen people could be seen approaching an entrance to the Capitol in an organized “stack” formation, outfitted in camouflage and tactical gear. She and at least two of her associates face multiple felony charges, including conspiracy.

Federal prosecutors also unsealed charges on Thursday against five additional people affiliated with the violent far-right Proud Boys organization. The FBI said they had participated in a coordinated assault on the Capitol, including communicating during and after forced entry into the building and working to prevent police from securing barriers against the invading mob. In the weeks prior to the siege, Proud Boys members mobilized around the country and boasted about how Trump had given them “the green light” for January 6.

2/ Folks will remember Jessica Watkins as part of the disciplined "stack" of #Oathkeepers moving up to the #Capitol doors, then forcing entry.