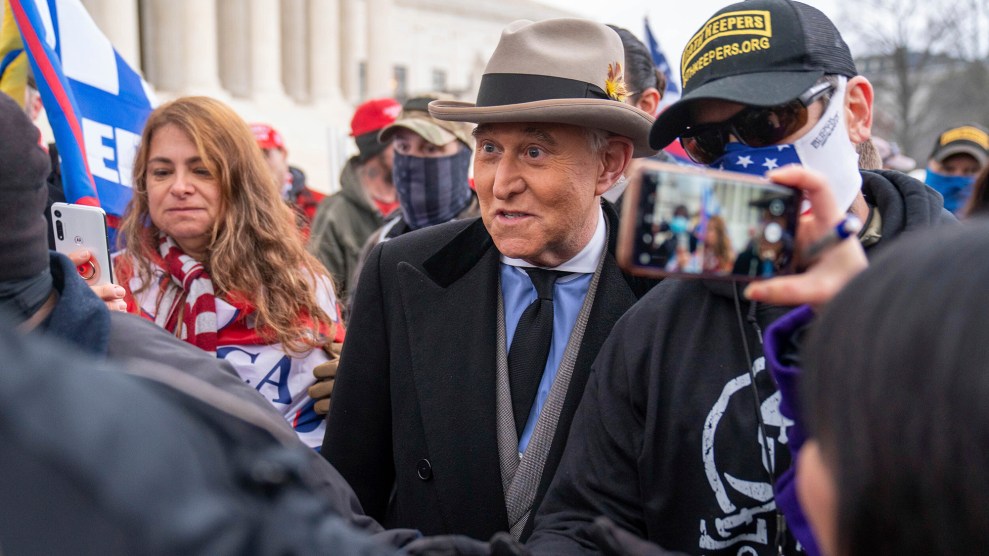 Roger Stone was more closely connected to the January 6 attack on Congress than previously known. The New York Times reported Sunday that six men who acted as security guards for the longtime Trump adviser participated in the riot and entered the Capitol.

At two Washington, DC events on January 5, and at the rally the day after, Stone, who was convicted in 2019 of lying to Congress and witnesses tampering before being pardoned by Trump in December, was escorted by a detail of men in gear identifying them as members of the Oath Keepers, a far-right anti-government militia. Some Oath Keepers have been charged with conspiring weeks in advance to attack Congress to try to stop lawmakers from certifying Joe Biden’s victory over former President Donald Trump.

Mother Jones has previously reported on Stone’s ties to the attack. Stone originated the phrase “Stop the Steal” for a political group he formed in 2016; an employee of a law firm tied to Stone formed an organization called the “Committee to Stop the Steal” in October. Stone later raised money for “private security” for events on January 5 and 6 that preceded the storming of the Capitol. He echoed Trump’s lies about election fraud and struck an apocalyptic tone in three speeches prior to January 6.

Images of Stone with men in Oath Keeper gear have circulated online since shortly after the attack, but the Times report confirms several of them joined in the invasion of Capitol. The Capitol Terrorists Exposers, a group of anonymous online sleuths who have been combing through videos and photos of the riot to help law enforcement identify attackers, helped the Times find members of Stone’s security detail among the rioters. The report does not name the men. ABC News identified one of the men; his wife told the outlet he had not entered the Capitol, a claim contradicted by the Times report.

In a February 10 post to his website, Stone acknowledged relying on a volunteer security detail comprised of members of the Oath Keepers on January 5 and “at three previous rallies in Miami and Tampa.” He said he was “told that all of the men who voluntarily guarded me were off duty police officers.” That assertion has not been independently confirmed.

Stone said the men engaged in nothing illegal and showed “no evidence of misconduct or any other extremist attitude.” Nor did he see Oath Keepers “involved in the planning and execution” of the attack on the Capitol, he said. But, Stone added, “if individual members of the organization committed unlawful acts, they should be prosecuted.”

In his January 5 speech at Freedom Plaza in Washington, Stone urged onlookers to join in “an epic struggle” to keep Trump in office. Stone also said he would be with Trump backers “shoulder to shoulder” the next day. He did not in fact join them, a point he has since emphasized to defend himself. But that was not fully Stone’s choice. Stone was scheduled to speak at the January 6 “March to Save America” rally, alongside Trump and others. But officials with Women for America First, the group that organized that rally, scratched Stone and other especially controversial speakers at the last minute, people familiar with the event said. Irate, Stone refused to attend the rally, according to a person who spoke to him that day. Those circumstances may have helped keep the self-styled dirty trickster out of more trouble.