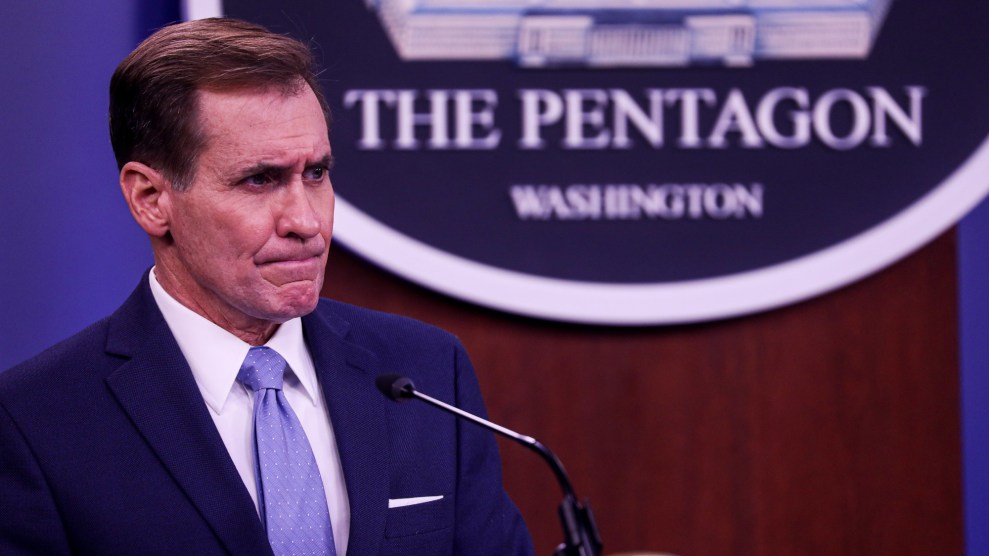 Extremism in the military is not a new problem, but the involvement of at least two dozen veterans and active-duty service members in the insurrection at the Capitol on January 6 gave the issue more urgency with Defense Department leaders. The insurrection was a “wake-up call” for the department, spokesperson John Kirby said last week. But while identifying the problem may be a positive step, solving it will be a different—and far more complex—matter.

Kirby acknowledged as much last week after announcing Defense Secretary Lloyd Austin’s decision to order service members across the ranks to “stand down” from their normal duties at least once over the next 60 days to discuss extremism as a group. “We don’t know how we’re going to be able to get after this in a meaningful productive tangible way,” he said, adding “that’s why” Austin ordered the stand-down in the first place.

The military has not commissioned a formal study on extremism in the ranks in more than two decades, but recent outside polling suggests that the problem is on the rise again throughout the ranks. Last year, a Military Times survey found that 36 percent of troops had “seen evidence of white supremacist and racist ideologies in the military,” a 14-point increase from the previous year.

While the Pentagon figures out how it wants to approach the problem, Democrats in Congress already have some ideas. Late last month, Rep. Jackie Speier (D-Calif.), a House Armed Services Committee member, sent a letter urging Austin and other national security officials to more proactively hunt for signs of extremism among new recruits. The military does not systematically review social media activity as part of the background check that new recruits go through, “despite collection and reporting of other intrusive, private data, such as financial and behavioral health information,” Speier wrote.

Military recruits—and a range of other government employees in national security positions—have to fill out a questionnaire, known as the SF-86, that asks if they have ever had “associations” with a terrorist group or have ever tried to “affect the conduct of a government by mass destruction, assassination or kidnapping.” Anyone filling out the form grants consent to what Director for Defense Intelligence Garry Reid called “limited social media monitoring” in testimony before Congress last year. The review would only look at public information and not “go behind passwords” or enter “private chat rooms.” Reid said the military doesn’t check social media “for every background investigation right now,” but has the “ability to do it if there are investigative leads.”

“What I’m asking for is what’s done on a regular basis by companies across the country as part of their HR function,” Speier told me.

In the days following the insurrection, social media provided clues for federal investigators to home in on the rioters who stormed the Capitol, including at least two active-duty service members. Army reservist Timothy Louis Hale-Cusanelli, who was described in a Justice Department filing as “an avowed white supremacist and Nazi sympathizer,” worked at a naval base in New Jersey where he maintained a “Secret” security clearance.

“What I’m asking for is what’s done on a regular basis by companies across the country as part of their HR function.”

Hale-Cusanelli managed to pass a background check despite posting “extreme political opinions and viewpoints” on YouTube and being unrestrained in his desire to foment another civil war, according to Justice Department filings. While inside the Capitol, he filmed himself saying “the revolution will be livestreamed.”

Other rioters were overlooked in more egregious ways. Thomas Caldwell, a Navy veteran who has an apparent leadership role in the Oath Keepers, a far-right extremist militia group, has held a “Top Secret” security clearance for more than 40 years, according to a legal filing from his attorney. The filing also claimed that Caldwell had been employed by the FBI during the Obama administration and done consulting work for the Army, Coast Guard, and Drug Enforcement Administration.

How willing the Pentagon is to adjust its policy to something closer to what Speier and other lawmakers are pushing for is still unclear. “Social media monitoring and screening is a key area of discussion and part of our ongoing review,” a Defense official said when I asked last week about whether there are plans to update the policy.

While congressional Democrats such as Speier have ramped up pressure on the Pentagon to strengthen its efforts to root out extremism, skeptics have warned of the potential for overreach that mirrors the government’s reaction to the September 11 terrorist attacks or raised concerns about whether the military can be trusted to implement such a program in an evenhanded, responsible way.

Rachel VanLandingham, a Southwestern Law School professor and a retired Air Force lieutenant colonel who advised the commanders of US forces in the Middle East during the Bush and Obama administrations, told me that she has “serious concerns” about a more intrusive social media policy “because I don’t trust people in the absence of procedure.” In an article published late last month, VanLandingham and co-writer Geoffrey S. Corn, a South Texas College of Law professor, asked, “Do we trust those doing the vetting that they aren’t also weeding out those whose politics or religion they don’t agree with?”

That question might be a bit easier to answer if the Pentagon had a straightforward answer about what constitutes extremist behavior. Defense Department guidelines prohibit service members from “actively” advocating “supremacist, extremist, or criminal gang doctrine,” but that language allows leeway for individuals to participate in radical group without being “active” members. Then there’s the problem of vaguely different policies within the military itself. The Air Force mostly adopts DoD’s language, but the Army’s command policy goes further, saying soldiers “must reject participation in extremist organizations and activities,” without making the distinction between active and “mere” participation. (“Just trying to understand the current policies related to extremist groups would challenge the most diligent military attorney,” VanLandingham and Corn wrote in their article.)

The difficulty in rooting out extremism in the military will ultimately run into many of the same obstacles that researchers and lawmakers face when confronting the problem in the general public. “Extremism is legal, for the most part,” Heather Williams, a senior policy researcher at the RAND Corporation and former National Intelligence Council official, says. “You can’t just jump to law enforcement tools and intelligence tools up front because they don’t apply. You have to look more at these messy, bigger questions of what is society tolerating, what is it making taboo?”