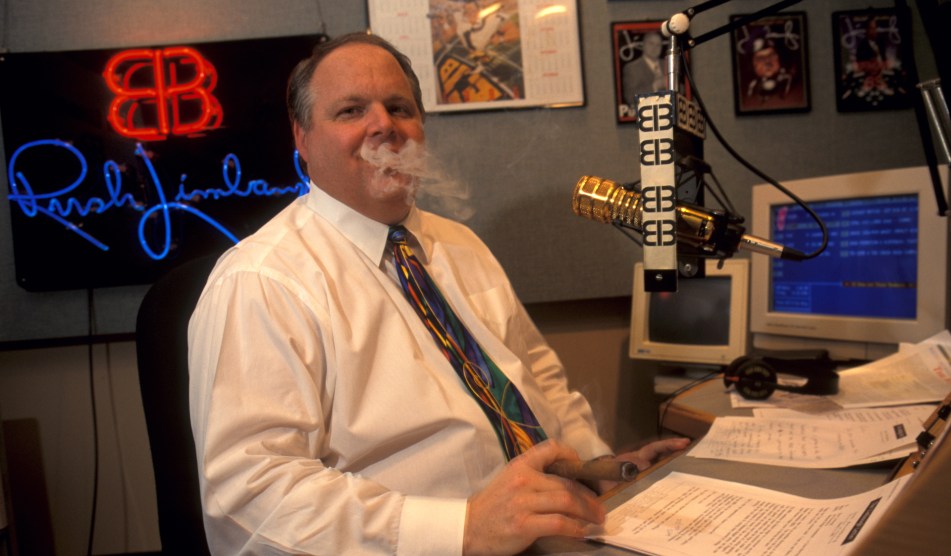 Rush Limbaugh died on Wednesday. Fox News called him a pioneer; HuffPost (correctly) proclaimed him a “bigoted king.” I’ll go with powerful ghoul. Rush said racist, sexist, and odiously right-wing shit every day for hours and hours on end, for years. He played the theme song from The Jeffersons whenever he talked about Carol Moseley Braun, the first Black woman to serve in the US Senate. He spoke terribly of those who had recently been killed—so no need to bother with the fake civility. If it’s unclear where to stand, just know the New York Times rolled out its code word for a terrible man who is newly dead: “provocateur.” Whether Limbaugh is good or bad isn’t really worth pondering. (Donald Trump gave him the Presidential Medal of Freedom.) The better question is why he was able to be an ass, and such an important one, for so long. In 1995, when Mother Jones wrote about Rush (“Wizard of Ooze”), he was the center of Republican politics, having helped bring about a conservative takeover of the House. Politico Mary Matalin said this to us: “You cannot underestimate, and you cannot overstate, the power of Rush Limbaugh.”

What was that power?

I think it was that Rush Limbaugh understood that “truth-telling” is a bit. A thing he did for money. From the beginning, it was a lie. And he believed his own bullshit only to the degree he could keep spewing it. The opinion itself didn’t matter. It was about having one and assuming you already shared it. Rush knew if he presented his thoughts as over the top but also grounded in “common sense,” he would gain two audiences—those who agreed and those who fucking hated him.

There’s an incredible old clip of Rush explaining this as the basic business of talk radio:

I listened to Rush a great deal growing up. My father was a big fan. (He even read his first book.) We were entertained, entertained, entertained. After the consolidation of radio stations brought on by the 1996 Telecommunications Act, many more were surely like us. And despite being “liberal,” we respected Rush Limbaugh for his technique.

By technique, I mean two things. First there was literally the way Limbaugh spoke. My Dad and I loved to do the “Rush Limbaugh pause”—we still do. It is hard to describe this, exactly. But Limbaugh’s use of silence on a show was masterful. He would stop mid-sentence, letting words dangle uselessly. A bit of this was surely to kill the massive amount of time he was on the radio each day. But another element of “the pause” was to create a cliffhanger effect. What is he going to say? We’d halt in strip mall parking lots, waiting to go into the store, just so we could hear him out. Maybe we would yell back at the radio if he was being an ass. Maybe we’d laugh. But mostly we wondered: What is he going to say? The thing was, he could say anything.

But when I mention technique I’m also talking about a larger infrastructure of evoking feeling. In his long career in radio, Limbaugh pioneered an art form, of sorts. He argued to argue. He picked holes in discussions with a series of whataboutisms. Limbaugh pretended not to understand his own argument’s downsides, and he steamrolled the other side as idiots, without ever deigning to engage. He particularly liked zeroing in on city council races or small issues. Time and again, listeners were given to think that some little thing, some left-wing stunt by Berkeley undergrads, was as important as any piece of federal policy. The effect was to create an air of pervasive degeneracy and menace—they were everywhere. He was—as I’m sure people on social media have been saying—a forerunner of social media in this way. He was a shitposter. Limbaugh’s style is everywhere in what the right has become: half-winking jokes, dunks on the left, Sean Hannity. He showed how to take a position half-seriously, for shits and giggles. His arguments weren’t built to persuade; they were designed to irritate the other side, and thus designed to win.

For me, that was Rush’s power. He presented conservative dogma as what it is: pure reaction. Did he have a core belief system itself? No. Of course not. Limbaugh had a simple tenet: I’m just saying what everyone is thinking! Former president George W. Bush, in a statement, summed up the attitude of many who loved Limbaugh for, as they saw it, daring to tell the truth: “While he was brash, at times controversial, and always opinionated, he spoke his mind as a voice for millions of Americans and approached each day with gusto.”

The truth about Rush though is he was a phony. He wasn’t speaking any hidden truth. He was, instead, an utter sellout. He was a failed disc jockey who found a gimmick.

Brian Rosenwald documents this well in Talk Radio’s America: How An Industry Took Over a Political Party That Took Over the United States. In 1984, Limbaugh was down on his luck, destined to be fired from another gig. He was assigned to read news for a local Kansas City station. But Limbaugh couldn’t help adding his own opinion into the mix. An outside consultant had the thought that this might be a talent in itself, and Limbaugh was given a chance to run short commentaries instead of reading the news. These new Limbaugh segments provoked “massive response, largely negative, at first.” Everyone liked the attention, though. Reviews soon became more mixed, but they remained “visceral.” Who cared if it was bad? People were listening. (The station didn’t fire Limbaugh until he made fun of the management of the Kansas City Chiefs at “precisely the moment when the station was pursuing the Chiefs’ radio contract,” Rosenwald writes.)

That blowhard Rush is what I heard in the car growing up. He argued so stupidly that you wanted to engage. Yes, Rush had a talent. It wasn’t for speaking hidden truths. And it wasn’t for connecting, as some have said of Trump, with the heart of an embattled people longing for real talk. It was the opposite. It was that he bullshitted. And for so many the appeal of bullshit like Limbaugh’s and Trump’s is that creates an air of freedom of a certain kind—no need for consistency, no values to uphold, no kindnesses required. It is permission—big pause here—to be an asshole.

Not long ago I started tuning back into Rush again. Sometimes there was a new thrill—Limbaugh reading ads for CBD, for instance. But mostly I marveled at the way the old man could still spin it. Take, for example, this brief morning update from August 31, 2020.

First, as usual, Rush begins by telling you which side you’re on—and who is attacking you for being normal.

Do you own an SUV? If so, you are to blame for the rise of CO2 emissions.

Got it? They’re trying to blame you for owning an SUV! Now, he’s going to jabber about the news in a mocking voice, as if all the legitimate information is insane:

According to the UK Guardian, between 2010 [and] 2018, SUVs were the second-biggest contributors to increased carbon emissions around the world. During those years, SUVs doubled in number around the world. SUVs now make up almost 40 percent of the automobile market worldwide. The SUV is a big success; people love ’em. And that just infuriates liberals.

The idea here is, again, that liberals hate fun. They hate the free market. They hate you.

If SUV drivers were a nation of their own, says the Guardian, they would be the seventh-worst country in the world when it comes to polluting the planet and causing climate change! So protests are gearing up. In Germany, Greenpeace blocked a shipment of SUVs. At a Frankfurt motors how protesters climbed on top of SUVs. And they had signs saying “climate killers.” But so far here in the States there are no large-scale protests.

Now for the triumphant finale. Rush will make this about American success:

People are not unhappy about SUVs. They’re not worried about gloom-and-doom predictions. They’re buying them. More than half of all passenger cars purchased in America are SUVs. So without question that means we are leading the way. We Americans are showing the rest of the world how to enjoy freedom. On the roads! How to enjoy your life! In style! In comfort. In SUVs. We should be proud of it. And we should tell any malcontent liberal protester, well, if you don’t like SUVs, take a hike, start walking.

The best thing I can say about Rush is that I would never read an article in the Guardian about SUV carbon emission and know how to turn it into a story about American exceptionalism. That takes skill. You were an evil shit, Rush. Enjoy that big pause in the sky.