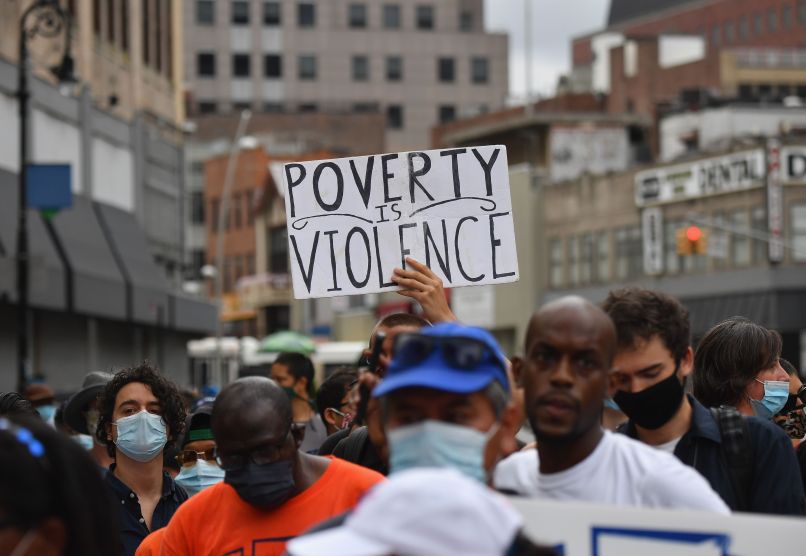 A crowd protests evictions carried out by law enforcement.Angela Weiss/AFP/Getty

Most Americans understand that our nation’s wealth distribution skews toward the rich, yet few seem to fully grasp how gaping the disparities are.

Ten years ago, social scientists Michael Norton and Dan Ariely published a paper in which they asked more than 5,500 American participants to estimate their nation’s wealth distribution. Their subjects guessed, on average, that the least wealthy 40 percent—about 125 million people—owned 9 percent of the nation’s overall assets. The true figure then was 0.03 percent—almost nothing. Sometime last year, I conducted an informal Twitter poll asking the same question, and though it was hardly scientific, most of my 32 respondents also greatly overestimated the wealth of the bottom 40 percent.

How could the bottom 40 percent have nothing at all? Well, as you move down the economic ladder, you reach a point at which household wealth zeroes out and turns negative. In 2019, according to the latest calculations provided to me by University of California, Berkeley economists Emmanuel Saez and Gabriel Zucman, all households from the bottom up to the 23rd percentile owned nothing—or less than nothing. They were in debt, and those at the very bottom were deeply so.

This economic pain, not surprisingly, isn’t equally distributed. A new analysis from the Institute for Policy Studies—which has been churning out report after report on economic inequality, racial inequities, pandemic profiteering, and the ludicrously good fortunes of America’s billionaires—breaks down our “underwater” families by race.

The upshot: Black and Hispanic Americans have made gains relative to whites over the years in terms of being entrapped in a cycle of debt, but Hispanic households were twice as likely as white households to have assets of zero or less—and Black families were very nearly so. This, remember, was before the pandemic.

As my Mother Jones colleagues Edwin Rios and Dave Gilson detailed in a recent data spread, it is Black, Latino, and Native American households hit hardest by the virus, economically and otherwise. Families of color are significantly more likely to have experienced income declines and worries about their ability to pay the rent. Black, Latino, and multiracial households were roughly twice as likely as white families to say they hadn’t had enough to eat in the previous week. In December 2020, Black men had the nation’s highest unemployment rate—10.4 percent.

Given that a large proportion of the nation’s workers was living paycheck to paycheck even before COVID, “we can anticipate an increase in the number of households who will be under financial water,” note Omar Ocampo and Chuck Collins, the authors of the IPS analysis.

In an email, Collins, who co-authored a 2019 report outlining 10 ways to tackle the racial wealth gap, added that we Americans tend to think of the United States as a very prosperous nation. “Yet the staggering percentage of households with no reserves or negative wealth betrays that image,” he said. “The millions of households—disproportionately Black and brown—that have zero or negative wealth is one of the most morally appalling measures of inequality.”