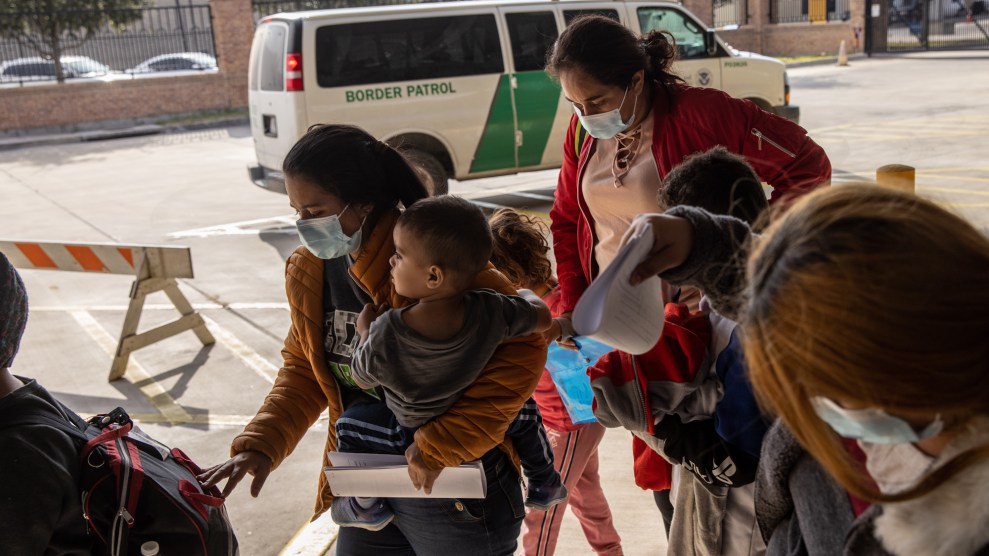 A family of Central American asylum seekers arrives to a bus station after being dropped off by U.S. Border Patrol agents in Brownsville, Texas.John Moore/Getty

In early February, Texas Gov. Greg Abbott met with the director of the state’s Department of Public Safety, and the two workshopped ideas about how to deal with the children and families arriving at the U.S. border in greater numbers—a “surge,” as Abbott calls it, a martial analogy requiring, in his view, a martial response. Shortly after, Abbott ramped up policing in border regions, deploying 1,000 state officers, including the Texas Rangers, to coordinate with the Texas National Guard and provide additional air, ground, and marine surveillance.

The move brought sharp criticism from immigrant rights groups, especially after the program expanded the duties of state police to interview unaccompanied minors. Abbott said these interviews will identify victims of human trafficking, but Melissa Lopez, an attorney at Diocesan Migrant and Refugee Services in El Paso, questioned the timing of so-called Operation Lonestar.

“I think it’s highly hypocritical of Gov. Abbott to be suddenly concerned with the humanitarian situation at the border,” Lopez said during a Zoom call last week with the Refugee and Immigrant Center for Education and Legal Services (RAICES). She went on to criticize his response to former President Trump’s Remain in Mexico policy, which forced asylum seekers to wait out their cases outside of the U.S. “At no point was there ever concern for their safety, for their dignity. And suddenly, there’s a ‘crisis at the border,’ and we need to be concerned, and we’re going to start investigating human trafficking, as if human trafficking is something new.”

In recent years Texas has been an especially eager participant in militarizing the border. In 2018, the Texas Observer reported that the state spent more than $2 billion on Operation Strong Safety and Operation Secure Texas. Using federal money, the state deployed 1,000 Texas National Guard troops in 2019 to assist at temporary holding facilities and at ports of entry.

“It’s an unfortunate reality, way too many fronterizos—people from the border—continue to struggle as a consequence of increased border militarization,” said Danny Diaz, mobilizing director for community group La Unión Del Pueblo Entero. “Communities like Starr County, Texas instantly became a hot spot over the last several weeks—a hot spot of over-policing, of terrorizing working families, regardless of immigrant status. These are the reports we’re hearing.”

Diaz’s group, LUPE, is part of the New Ellis Island Border Policy Group, a coalition of immigrant rights groups in Texas border regions. On Friday, they joined Rep. Veronica Escobar on Facebook Live to stress that the migrant flows to the border were a predictable result of recent stressors in many migrants’ home countries, including hurricanes and the pandemic. The groups also called for governmental aid in the form of welcoming centers, beds, and medical care. Activists say that these resources, rather than additional detention centers or policing, would allow asylum seekers to be processed humanely.

Axios reported that, as of Sunday, 823 unaccompanied migrant children have been in border patrol custody for more than 10 days, far beyond the legal maximum of 72 hours. Some families have been flown from South Texas to El Paso, only to be sent to Mexico shortly after. Photos shared by Rep. Henry Cuellar, D-Texas, on Monday revealed overcrowded conditions in a CBP facility in Donna, Texas.

Photos taken by a member of Congress reveal the crowded conditions unaccompanied immigrant kids are held in at the border https://t.co/HK3193WkU9 pic.twitter.com/QXmjqOt86G

“It is time that Texas leaders embrace and actually identify ways that they can help and support children that are coming, support families that are seeking asylum, and facilitate the lives of immigrants that have been here and contributing to the country,” said Adriana Cadena with the Reform Immigration for Texas Alliance.

The invention of a border crisis and the marshaling of violence in response are an old Texas tradition, as my colleague Tim Murphy has written. In the early 20th century, the Texas Rangers, “who had evolved from a frontier guard into a state security force controlled by the governor, had swelled in response to fears of violence on the southern border,” Murphy writes. “In reality, the Rangers instigated a reign of terror in which between 300 and several thousand Mexican nationals and Mexican Americans were killed.” In 1918, the Texas Rangers shot and killed 15 Tejano boys and men in the Porvenir Massacre, putting the future of the group in question—for a time.

Reports of misconduct by the state police force are still common. The San Antonio Express-News reported in 2019 on a lawsuit alleging that the department often didn’t punish Texas Rangers who broke rules or violated ethical standards.

Fernando Garcia, executive director of the Border Network for Human Rights, said the country’s response in this moment will define the character of the United States in the coming years.

“This is very dramatic because we can go either way. We can go on this idea that the only way we can actually consider the border is a militarized border, putting children in cages, deporting them, and building walls,” Garcia said. “Or we can have a border that is recognized as a major asset, but also an opportunity for our nation….The future is in this border.”