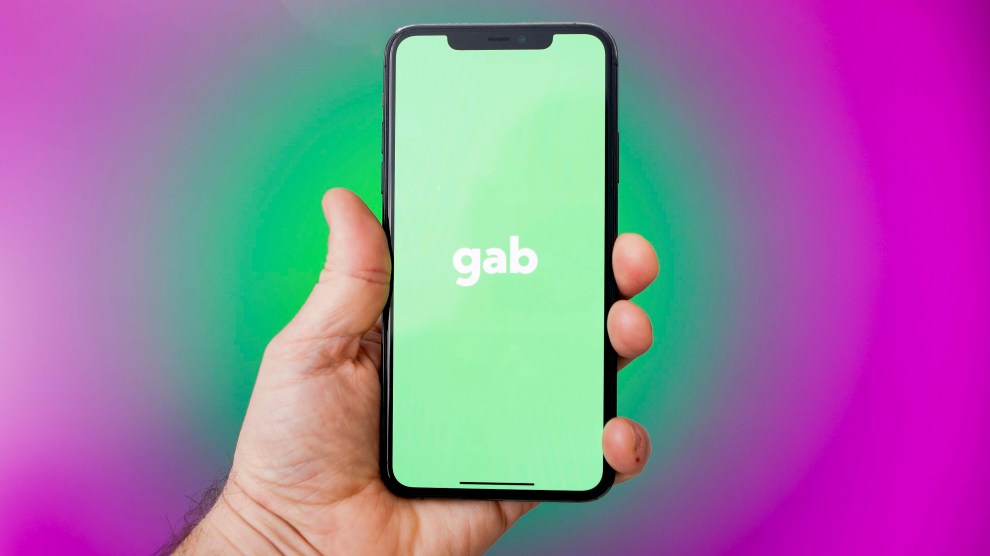 Since 2016, when Andrew Torba founded Gab, a Twitter clone that boasts that it “champions free speech,” it has served as a haven for alt-righters, QAnon supporters, and other far-right groups banned from mainstream platforms. Recent private Gab messages from Torba, made available last week by a whistleblowing website after a massive hack of the platform, show him directly wooing bigoted conservative figures to the site and working to showcase their content.

The messages were obtained by a hacker who goes by JaXpArO and provided to Distributed Denial of Secrets, a website that calls itself a “transparency collective.” This immense cache of stolen Gab data includes a conversation in which Torba welcomed Daryush Valizadeh, a misogynist and anti-semitic right-wing internet figure, to the platform. Valizadeh, a pickup artist, video maker, and blogger known as as Roosh V within the online “manosphere,” has bragged about committing acts of sexual assault and derided Jews. While he’s taken steps to distance himself from the alt-right, he has had ties to the movement and supported Richard Spencer, the white nationalist who gave it its name. None of that history stopped Torba from extending what Valizadeh called a “warm welcome” to Gab.

The chat suggests “Torba has a direct appreciation for individuals that promote antisemitism and hate.”

“Thank you for the warm welcome on Gab. I enjoy not having to self censor like on Twitter,” Valizadeh wrote. “You’re welcome brother, pray for us. We need it,” Torba responded. Their exchange occurred the day after a pro-Trump mob stormed the US Capitol, as media reports about how Gab had been used by riot participants to share tactics and document their attack.

In a subsequent message to Valizadeh, Torba praised E. Michael Jones, a prominent anti-semitic writer and publisher whose work has been tracked by the Anti-Defamation League, and who Valizadeh has interviewed several times on his podcast.

“I am a huge fan of EMJ too, he has an account but hasn’t logged in for some time,” Torba wrote, seeking Valizadeh’s assistance in getting Jones to use his dormant Gab account more—especially to host his videos, which regularly appeared on the video streaming site, BitChute. “Would love to get all his videos on Gab TV, very important for the distribution and preservation of truth. If you can send him a note, I tried emailing the email we have on file but it bounced.” Torba also promised to personally enable Valizadeh’s account to upload more than the site’s standard maximum of 120 minutes of video content per day.

Torba’s efforts seemingly succeeded. After the exchange, Jones began uploading videos to Gab TV; he appears to have 16 on the site as of this week. In one of them, Jones accuses Secretary of Transportation Pete Buttigieg of “commandeering the resources of” South Bend, Indiana, while he was mayor “to promote the homosexual agenda,” and he argued, “you can’t allow homosexuals into office because they only represent their own narcissistic fantasies.”

After I reached out to Torba on Monday about this exchange with Valizadeh, he confirmed its authenticity in a public post on his own platform. “I apologize for absolutely nothing because I did nothing wrong here,” he wrote in the message, which included a screenshot of my email. “I am indeed a big fan of both @rooshv and @EMichaelJones and have signed copies of their books.” Torba also responded by email to me defending the pair, writing that “Your labels mean nothing to me. Biblical Truth is Biblical Truth.” Hours later, Gab praised white nationalist and peddler of anti-semitism Nick Fuentes on its Twitter account, writing that both he and Gab “embody the true and relentless spirit of American excellence, ingenuity, grit, and defiance in the face of tyranny.”

After examining the thread exchanged by Torba and Valizadeh, Oren Segal, the vice president of the Center on Extremism at the Anti-Defamation League, noted that it “seems to show that Torba has a direct appreciation for individuals that promote antisemitism and hate.”

“His reference to ‘the preservation of truth’ makes it seem as if he supports the hateful content itself and not just that right to post the content. If true, these chats demonstrate not just a willingness to ignore hate on the platform under the guise of free speech, but show a level of support for individuals that promote such hatred, perhaps more explicitly than some may have imagined,” Oren wrote in an email.

The Southern Poverty Law Center has documented numerous instances of Valizadeh espousing anti-semitism on Twitter, and he and spoken at an event for Spencer’s think tank. According to an ADL synopsis of E. Michael Jones’ writing, he has a long history of promoting the idea that “Jews are dedicated to propagating and perpetrating attacks on the Catholic Church and moral standards” The ADL has also noted that Jones has argued “mass killings of Jews throughout history have been understandable reactions to Jewish beliefs and behavior.” Neither Valizadeh nor Jones responded to emails asking about their being characterized as anti-semites.

Valizadeh and E. Michael Jones are part of a larger group of far-right figures that have turned to Gab to avoid anti-hate content restrictions on other sites. The most notable anti-semite to use the site was Robert Bowers, the shooter who in 2018 killed 11 worshippers at Pittsburgh’s Tree of Life synagogue. Hours before his attack, Bowers went on Gab to post, “Screw your optics, I’m going in.”

In the past, Torba has tried to distance Gab from the political movements that have made it their home. In 2018, on an episode of his podcast, Torba said of Gab, “None of us are alt-right. I am not alt-right, no one on our team is alt-right, the company is not alt-right. We never have been. Do we have alt-right users? Certainly. Alt-right users also exist on Facebook, on Twitter, on Reddit, and everywhere else on the Internet. We have good people. Good people who believe in individual liberty, the free-flow of information, and free expression.” In 2016, Torba similarly told the Washington Post that he had not “set out to build a ‘conservative social network’ by any means.”

On Monday, Gab was hacked  for the second time in the past two weeks, as someone took over high profile accounts on the platform, including Torba’s and that of Rep. Marjorie Taylor Greene (R-Ga.). The intruder posted messages insulting the site’s poor cybersecurity, claimed to be JaXpArO, the same hacker responsible for the prior hack, and threatened to release more information unless they were paid. In a subsequent statement on Gab, Torba confirmed it was the same hacker responsible for the prior attack.

2021-01-07T05:10:30 @rooshv[VP]: Thank you for the warm welcome on Gab. I enjoy not having to self censor like on Twitter. God bless you for keeping Gab open in spite of the heavy attacks you’ve received

2021-01-07T14:21:13 @a[VPD]: You’re welcome brother, pray for us. We need it. By the way feel free to back up all of your video content on Gab TV. I’m a huge fan of EMJ too, he has an account but hasn’t logged in for some time. Would love to get all his videos on Gab TV, very important for the distribution and preservation of truth. If you can send him a note, I tried emailing the email we have on file but it bounced.