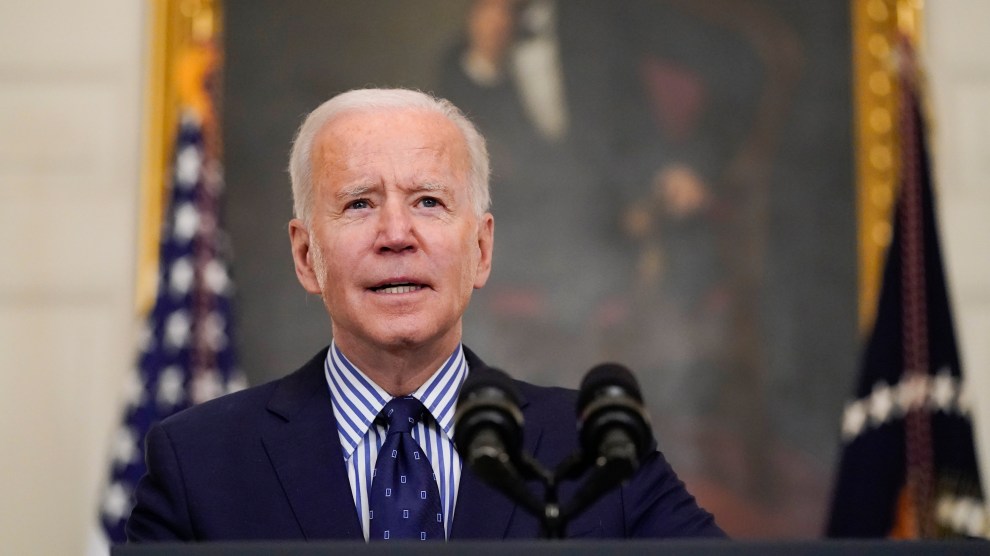 Since taking control of the White House and Congress this January, Democrats have talked a lot about the need to go big, and to sell their accomplishments. The last time they exercised this much control in Washington, the thinking went, they’d dropped the ball on that front; they played it too cute at every turn, wary of seeming crass, or self-conscious about the high price tags of their bills, and Republicans filled the messaging void they left behind.

So it was in that spirit that a few hours after the Senate passed a $1.9 trillion COVID-19 relief bill on Saturday, President Joe Biden addressed the nation with a very simple message: I’m from the government, and we’re here to give you all a lot of money.

Today, the Senate passed the American Rescue Plan – bringing us one step closer to delivering much-needed relief. Tune in as I deliver remarks. https://t.co/wX8fXNGYqi

“This nation has suffered too much for much too long, and everything in this package is designed to relieve the suffering and put us in a position to prevail,” he said in remarks from the White House, shortly after he canceled a planned trip back to his home state.

Biden rattled off the bill’s big components—$1,400 checks, $350 billion in aid to states, funding for schools to facilitate reopening, money for more vaccination sites and people to staff them, expanded unemployment benefits, a tax credit he said would cut child poverty “in half.” Turns out you can pay for a lot with $2 trillion, and however much Republicans will try to make hay out of spending for pet projects, Biden isn’t running from that largesse. Instead, he’s very affirmatively running on it.

.@POTUS: "When I was elected, I said we're going to get the government out of the business of battling on Twitter and back in the business of delivering for the American people." pic.twitter.com/UQBsk4bLo3

Again and again he hammered at this theme. Congress will “have delivered real tangible results for the American people and their families,” he continued. “And they’ll be able to see and know and feel the change in their own lives.”

“This plan is historic,” he said.

The only thing missing from this victory lap was a Trans Am.

It’s a platitude, but politically speaking, it’s also the whole ballgame: When you are responsible for changes in people’s lives, you should make sure everyone knows it. The Democratic project broadly speaking, and the current Democratic Congress and presidency more specially, was built on this idea. Biden was elected while promising to whip the coronavirus and rebuild the country. Democrats won the Senate a few months later in no small part because two candidates in Georgia very explicitly and repeatedly promised voters another round of checks. Their political careers depend not just on delivering what was promised, but on people being able to connect the improvements that will result from this bill to the decisions that were made at the ballot box. Democrats won’t get many chances to deliver. For now, at least, it doesn’t sound like Joe Biden needs a reminder of the stakes.