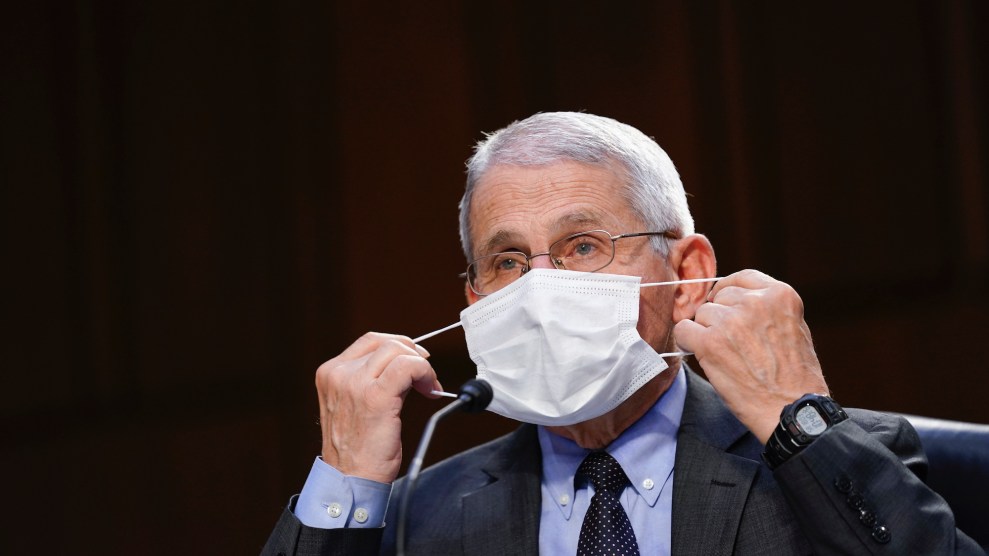 The United States is vaccinating more than three million Americans against COVID-19 each day, and the daily infection rate has fallen steadily since January. But Dr. Anthony Fauci, chief medical adviser to President Joe Biden, warned the number of daily cases has stopped going down. How well Americans adhere to spread-reducing guidelines, he said, will determine whether this shift signals a new surge or slowdown.

“When you’re coming down from a big peak and you reach a point and start to plateau—once you stay at that plateau—you’re really in danger of a surge coming up,” Fauci said Sunday on CBS’ Face the Nation. “Unfortunately, that’s what we’re starting to see.”

The country’s infection rate hovers around 60,000 new cases a day. That’s an increase from the 50,000 per day average the CDC recorded in the preceding two weeks, a low not seen since mid-October 2020. States where the virus had previously been under control, such as New York and Massachusetts, are seeing new spikes. Fauci indicated that when similar dynamics emerged in Europe, another surge in infections followed. “That’s why we say it really is almost a race between getting people vaccinated and having this peak,” Fauci explained.

Fauci blamed the U.S.’s steady case rate on some states’ recent discontinuation of mask mandates and other spread-reducing measures, changes in public health policy that Fauci called “premature” given the state of the disease. He also faulted Americans who are traveling for spring break. “Even if on the planes people are wearing masks, when you get to the airport, the check-in lines, the food lines for restaurants, the boarding that you see, how people sometimes can be congregating together, Fauci explained. “Those are the kind of things that invariably increase the risk of getting infected.”

New variants of COVID-19, Fauci said, “are playing a part” in the struggle to control the virus, but the relaxation of disease-mitigating measures is playing a bigger role.

If the U.S. can quash another surge, Fauci said states and cities could see “an incremental relaxation of some of the restrictions” that have been in place to prevent big gatherings since the pandemic’s arrival in the country a year ago.

“I would expect that as we get through the summer, late spring, early summer, there’s going to be a relaxation where you’re going to have more and more people who will be allowed into baseball parks, very likely separated with seating, very likely continuing to wear masks,” Fauci explained. “As we get a really, really low level of infection, you’re going to start seeing a pulling back on some of those restrictions, I hope.”