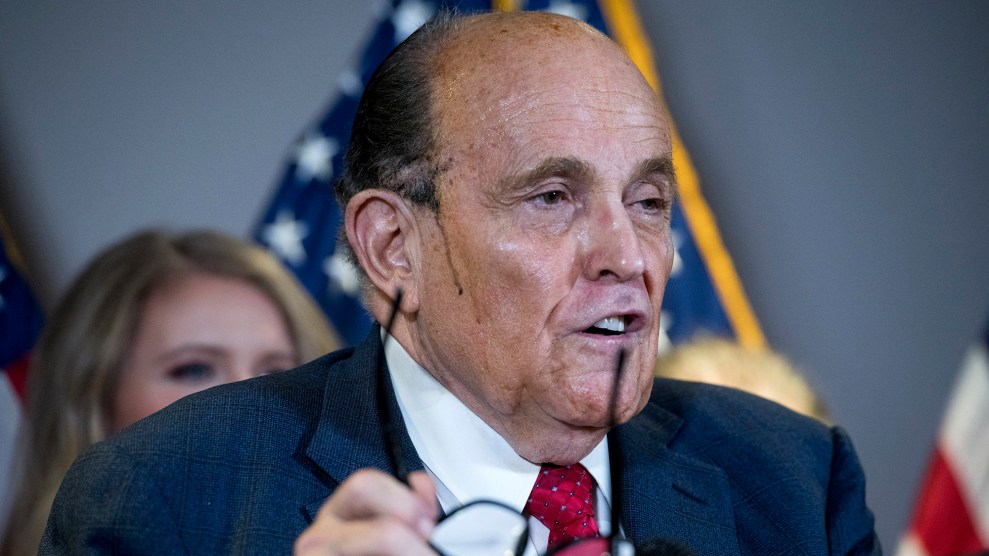 Elements in the Russian government, including President Vladimir Putin, oversaw a bid to use outside proxies to feed disinformation to Rudy Giuliani, Fox News, and the right-wing TV network OANN aimed at helping Donald Trump against Joe Biden during the 2020 campaign, a newly declassified US intelligence report reveals.

The report—declassified Monday and released Tuesday by the Office of the Director of National Intelligence—ties a series of previously reported episodes and allegations into a single sprawling effort that saw the Russian government work to influence the outcome of the 2020 election. The Russians, the report states, pushed “influence narratives—including misleading or unsubstantiated allegations against President Biden—to US media organizations, US officials, and prominent US individuals, including some close to former President Trump and his administration.”

The report seems to refer to efforts by Giuliani, Trump’s personal lawyer, and conservative media figures at Fox News and OANN to push allegations that Biden and his son were deeply involved in political corruption in Ukraine, though Giuliani and other Americans are not specifically named. Russia’s goal was to get Trump reelected because he was viewed as a preferable alternative to Biden, the report claims. The Kremlin also hoped to undermine Americans’ confidence in the electoral process and sow political divisions, it says. In some ways, the operation built upon the well-documented efforts the Russian government used to interfere in the 2016 election. But this time, the report claims, the methods were far less technical and relied more on getting information into the national conversation and letting it go from there.

“A key element of Moscow’s strategy this election cycle was its use of people linked to Russian intelligence to launder influence narratives…through US media organizations, US officials, and prominent US individuals, some of whom were close to former President Trump and his administration,” the report notes. That information—specifically allegations of Biden family corruption in Ukraine going back as far as 2014—was fed through Andriy Derkach, a Ukrainian legislator who has ties with Russian officials and the Russian intelligence services.

Giuliani did not respond to a request for comment.

Another key player in the efforts was Konstantin Kilimnik, an associate of former Trump campaign chairman Paul Manafort and a likely Russian intelligence officer, according to a report issued last fall by the Republican-led Senate Intelligence Committee. That report concluded that Manafort—who was convicted of financial crimes in 2018 and sentenced to seven-and-a-half years in prison, only to be pardoned by Trump in December 2020—was a “grave counterintelligence threat” due to his “sustained contact” with Kilimnik before, during, and after the Russian election interference campaign of 2016.

In 2020, the new report claims, Kilimnik and others used “prominent US persons and media conduits to launder their narratives” and “met with and provided materials to Trump administration-linked US persons,” among other efforts. They were also behind a “documentary that aired on a US television network in late January 2020,” the report reads. This is an apparent reference an OAN segment titled “The Ukraine Hoax: Impeachment, Biden Cash, and Mass Murder,” which was hosted by Michael Caputo, a right-wing operative who Trump later made the top spokesman for the Health and Human Services Department.

In a phone interview, Caputo said said he had not spoken to Derkach or Kilimnick for the movie and answered “no” when asked if he was aware of any Russian government involvement with it. (Caputo’s co-executive producer on the movie, Sergey Petrushin, is Russian, though Caputo said Petrushin, who he described as his “business partner and friend for 25 years” lives in Miami.)

Iran and China are also mentioned in the report. Iran’s haphazard attempt to interfere in the election included sending emails purportedly from the violent right-wing hate group the Proud Boys to Democratic voters threatening them if they didn’t vote for Trump. That was part of that country’s broader effort to harm Trump’s reelection efforts, the report states. Iran’s government also created several thousand social media accounts pushing political messages, many of which were discovered, identified publicly, and removed by the social media platforms. Iranian interference activities continued after the election, such as when Iranian actors created a website targeting US election officials.

China “did not deploy interference efforts and considered but did not deploy influence efforts intended to change the outcome of the US presidential election,” according to the report, because the Chinese government likely sought stability in its relationship with the United States and did not prefer either Biden or Trump enough to risk the potential blowback of more direct interference. A “minority view” included in the report speculated that China “took at least some steps to undermine former president Trump’s reelection chances, primarily through social media and official public statements and media.”

Other foreign players were briefly mentioned: Hezbollah Secretary General Hassan Nasrallah “supported efforts to undermine former President Trump,” and Cuban intelligence tried to undermine Trump “by pushing anti-Republican and pro-Democrat narratives to the Latin American community.” Venezuelan President Nicolas Maduro “had the intent, though probably not the capability, to try to influence public opinion in the US” against Trump, the report states, without mentioning that Trump was accused of trying to foment a coup against Maduro.