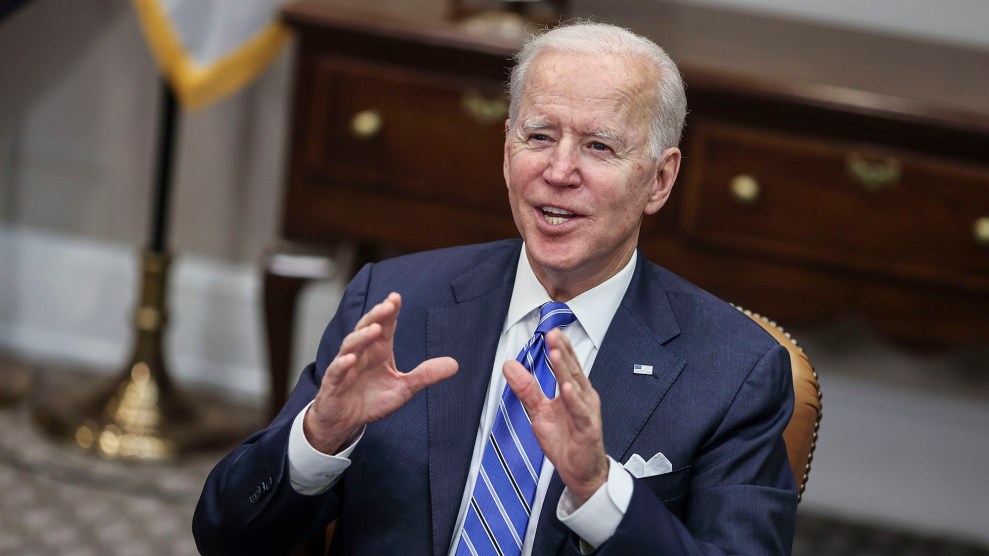 After a marathon all-night vote on a series of amendments, the Senate passed a $1.9 trillion pandemic relief bill on Saturday on a 5o-49 party-line vote, moving one of President Joe Biden’s signature initiatives one step closer to becoming law.

Among other things, the bill includes $350 billion for state governments, and extends unemployment benefits at $300-a-week through September 6. And most famously, the package includes another round of checks—a full $1,400 for people below a certain cutoff. (That would be $75,000 for single individuals, $112,500 for single parents, and $150,000 for couples.)

This doesn’t have everything Biden and progressives in Congress originally pushed for. The thresholds for checks has gone down substantially from what passed the House (and what was included in earlier COVID relief measures). An effort to attach language raising the minimum wage to $15 an hour failed (with eight Democrats voting against it). And the extended unemployment benefit was unexpectedly slashed at the last minute from $400-a-week to $300—thanks to a perplexing gambit by West Virginia Sen. Joe Manchin, the most conservative Democrat in the chamber.

But it is still, as the president might say, a big F-ing deal. $1.9 trillion is a whole lot of money. Sen. Bernie Sanders of Vermont called it “the most significant piece of legislation to benefit working people in the modern history of this country.” It’s more than double what President Barack Obama and Congress secured amid the Great Recession in 2009. The specter of that effort, the American Recovery and Reinvestment Act, loomed over this plan from the beginning, fueling the push to go big and act fast rather than pursue Republican votes they were never really going to get. They asked for a lot and they got a lot.

“We cannot go through the situation we did back in 2009, where the stimulus wasn’t strong enough and we stayed in recession for years,” Senate Majority Leader Chuck Schumer told reporters last week.

Biden recently suggested Obama showed too much “modesty” in the wake of that effort, and implored Democrats to take a “victory lap” on legislation that polls show is overwhelmingly popular.

The bill will now go to the Democratic-controlled House. Once it passes there, it’ll go to President Joe Biden’s desk. And then, finally, you can start looking out for those checks.