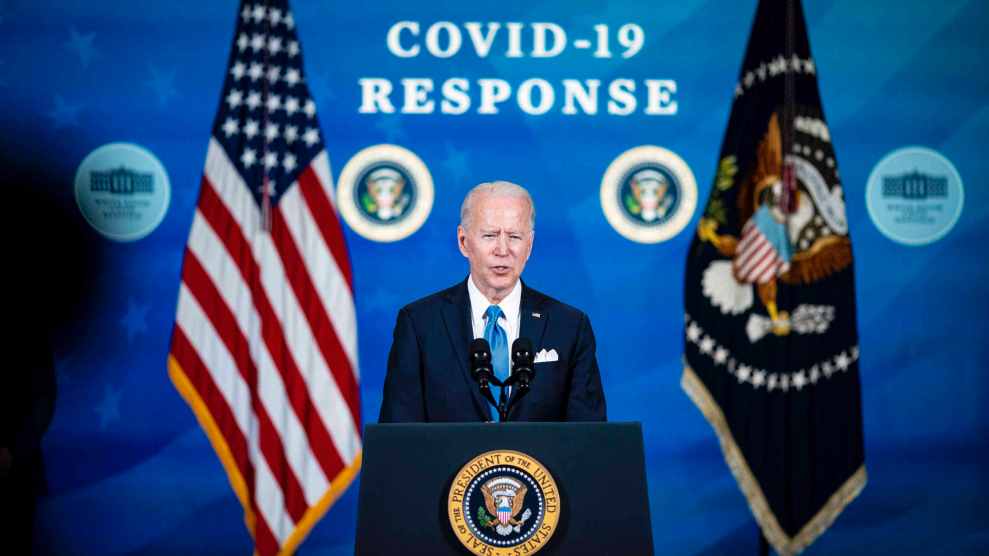 Donald Trump created the greatest economy in the history of the United States. Donald Trump enacted the largest tax cut ever. Donald Trump delivered strong and successful trade deals. Donald Trump built the wall and got Mexico to pay for it. Millions of Americans believe these lies and view his presidency as a success because Trump relentlessly repeated these falsehoods. He routinely bragged and claimed credit for successes that did not exist, without bothering to do the actual spade work of governing. It was a four-year-long unrelenting orgy of messaging. As any pitch man knows, message often trumps results, whether true or not. And Trump was a master of hyping fantasy accomplishments to sell the only thing he cares about: Trump.

That worked for Trump. Sort of. It placed a man whose inept response to the COVID-19 pandemic led to the deaths of over half a million Americans within striking distance of winning reelection as president. And even after he inspired a bloody seditious attack that aimed to thwart American democracy, Trump remains a hero—or idol—to many. Unceasing self-promotion was his only currency, and though his presidency was a deadly failure, it did illustrate the immense power of salesmanship. Or call it propaganda. And in Trump’s wake, a question lingers: What have Joe Biden and the Democrats learned in this regard? Are they prepared to message the hell out of what they do or achieve in order to prevent a Republican return to power in 2022 and 2024?

The early signs may be encouraging. The Biden administration has repeatedly promoted its efforts to speed up COVID vaccinations, particularly through its purchases of larger amounts of the different vaccines, and it has steadily cited the uptick in the pace of vaccination delivery. Earlier this month, Biden announced that the United States would have enough vaccine to inoculate every adult in the United States by the end of May, two months ahead of schedule. (Still, delays in various states could become a source of voter frustration.)

At the same time, while Republican leaders have griped about the discontinuation of a few Dr. Seuss books, the Biden White House has remained focused on the passage of the $1.9 trillion coronavirus relief bill—a.k.a. the American Rescue Plan. Biden, though, did pass up a Trumpian opportunity and opted not to place his signature on the $1,400 COVID relief checks that will soon be landing in the bank accounts and mail boxes of tens of millions of Americans. “He didn’t think that was a priority or a necessary step,” White House press secretary Jen Psaki said. “His focus was on getting them out as quickly as possible.” Of course, Trump, the narcissist-in-chief, ordered his vainglorious John Hancock affixed to the payments that were sent out last year. That was the first time in US history a president’s name appeared on a check from the IRS. Biden has decided to restore the norm Trump busted. He will undoubtedly seek to accrue political credit for the large COVID relief package—which is chock-full of progressive provisions that address economic inequality—in other ways. Or so Democrats should hope.

If past is prelude, concern about messaging in the Biden White House is warranted among Democrats. The last time Democrats held the White House, they slipped up on messaging, and it cost them—and the country—dearly. President Barack Obama, who also moved into 1600 Pennsylvania Avenue during a profound economic crisis, had a productive first two years. He enacted a $787 billion stimulus measure. (It was likely too modest, but the act did lift employment by up to 3 million jobs.) He passed historic health care legislation that would provide coverage to tens of millions. He pushed through a successful rescue of the auto industry. He took steps to better regulate the financial sector that had just crashed the American economy. Yet the Democrats were shellacked in the 2010 midterm elections, losing control of the House.

“The White House must make sure this central focus remains and other battles don’t take precedence over burnishing what they’ve done with vaccinations and the economy.”

At the time, Democrats griped that Obama, the king of messaging during the 2008 campaign, had lost his mojo in this regard as president. Obama and his crew acknowledged they had fallen short on the marketing. They had not effectively sold their accomplishments. They had not controlled the narrative. Obama had been loath to assail obstructionist Republicans, and the messy squabbling in Washington seemed to many voters to be a both-sides evil. “Emergencies got in the way of coherent messaging,” David Axelrod, a senior Obama adviser, told me in 2011, “and we were operating in a political environment when every day is Election Day and covered as such.” That is, Obama was fixated on (and bogged down by) the burdens of governing during a crisis, and the storytelling of politics was shoved aside.

Today, Axelrod is the director of the Institute of Politics at the University of Chicago, and this week I asked him to compare then and now. He notes that the messaging challenge the Obama crowd faced differed from the task at hand for Biden. The 2009 stimulus act, which relied on infrastructure projects and tax cuts, did not yield the most immediate and obvious payoffs. (Tax cuts that increase paychecks in small chunks over a year are not as prominent as one-time stimulus checks.) Moreover, an economic decline caused by a financial collapse was not likely to be remedied quickly and transformed into a roaring economy. “And we were way too frenetic and tactical,” Axelrod recalls. Referring to Obama’s chief of staff, Rahm Emanuel, he says, “Rahm felt as if we needed to put wins on the board every day. People couldn’t discern between big wins and little wins. The larger story line got lost.”

Unlike Obama’s Recovery and Reinvestment Act of 2009, Biden’s package could yield immediate and tangible results: the stimulus checks, unemployment insurance, a refundable child tax credit, an acceleration in vaccination. “This could have a real impact on lives immediately,” Axelrod notes, “and once the vaccines take hold and the combined stimulus of the bill hits, the economy will take off. It will be obvious to people.” That will make messaging easier for Biden and the Democrats.

The mission for Biden is to highlight the various components of the bill for weeks and months to come. So far, Axelrod praises the Biden gang (with whom he occasionally talks) for concentrating “on the central story that is gripping the nation”—vaccines and the economy. His advice: Don’t get pulled or pushed off your game. “There is a thin pipeline of communication from the White House to the public,” he says. “There are only so many stories you can convey. Stick to sharing the story of the efforts to subdue the virus and restore the economy.”

If Biden is not going to sign those checks, he’d better have other ways to tell his story—and to tell it again and again.

This sounds simple, but it’s easier said than done. The nanosecond-to-nanosecond-news cycle does generate pressure on elected officials and politicians to respond to the matters of the moment, be they important or trivial. Yet in the opening months of the Biden administration, the White House has regularly sidestepped the outrage-de-jour of the Twitterverse: Dr. Seuss, Cancun Cruz, and so on. Apart from issuing the occasional potshot or two at “the former guy,” Biden has steered clear of partisan mud fights. And he distanced himself from the second Trump impeachment.

A challenge for Biden might be how to tell (or sell) the same tale repeatedly but in new ways. If the vaccination program beats back the pandemic and the stimulus package revives the economy, how can Biden make sure voters remember the guy who brought the country to this dance, especially as Democrats head toward the 2022 midterm elections? Trump was a master at repeating slogans and bogus claims. Can Biden concoct a messaging strategy that will cut through clutter and the Republican efforts to gin up a culture war? Axelrod observes it will be crucial for the Biden White House to find a variety of channels to promote the various aspects of the American Rescue Act well into next year: “It should not a one-and-done deal.”

And there are other important issues and contentious political fights to come: climate change, voting rights, infrastructure, and more. Perhaps an unexpected foreign policy crisis or two. “They will be major lifts and battles,” Axelrod notes, “but through it all the White House must make sure this central focus remains and other battles don’t take precedence over burnishing what they’ve done with vaccinations and the economy. Voters need to know the full scope of what’s been done and how it affects their lives and identify it with Biden’s actions. Biden will never be Trump. There will be no breast-beating look-what-I’ve-done-for-you. But you want to shine on light on all this and sustain that effort.”

Judgment on Biden and the Democrats will be greatly shaped by whether his policies and actions work. But as Obama, Axelrod, and their compatriots learned, results are only one part of the equation. Many of the top people in the Biden administration—including the boss—were in the White House in 2010 and got clobbered because they did not devise effective messaging. With midterm elections always perilous for the party controlling the White House—and with the GOP pushing legislation at the state level to suppress voting—Democrats ought to hope that those bruises earned a dozen years ago lead to a more savvy strategy within the Biden clubhouse. He doesn’t have to be a carnival barker who never shuts up. But if Biden is not going to sign those checks, he better have other ways to tell his story—and to tell it again and again.