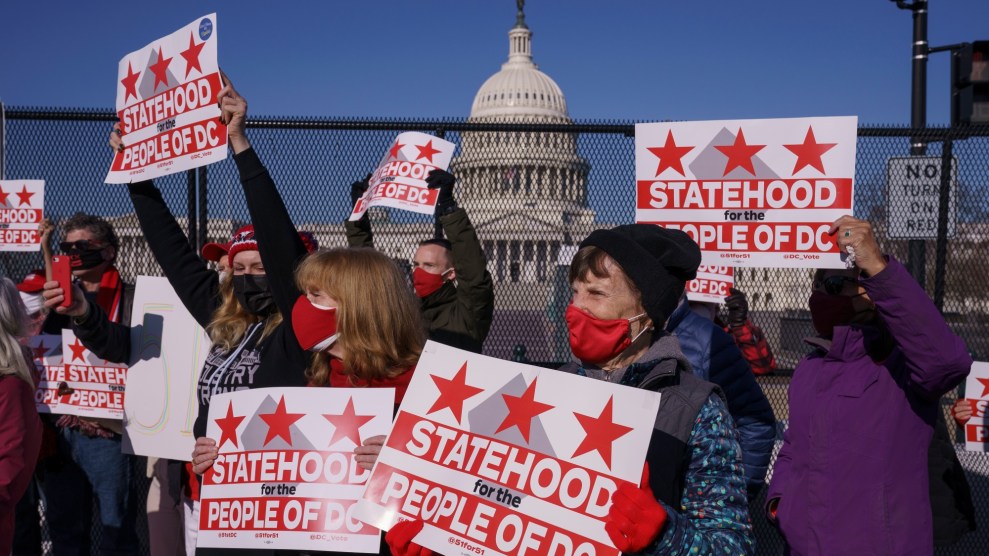 With Joe Biden in the White House and a slim Democratic majority in Congress, residents of the District of Columbia are probably the closest they’ve ever been to finally gaining statehood. It’s a real moment for a movement that has long been at the bottom of the wishlist for the Democratic agenda; the bill that would grant statehood to DC—HR 51—was approved by the Democratic-led House last year but never made it to the floor of the GOP-controlled Senate. But now that Democrats have won control of the upper chamber, the fight has resumed. On Monday, the House held a hearing on DC statehood.

The case against DC statehood is steeped in anti-Black racism, a fact that House Republicans worked hard to obfuscate during Monday’s hearing. Though the typical talking points against statehood were made ad infinitum—that it’s unconstitutional, and that it’s nothing more than a Democratic power grab—some participants found even more nonsensical reasons for why DC shouldn’t become a state. Here are the worst:

DC shouldn’t become a state because it doesn’t have any car dealerships, landfills, or airports

Apart from the fact that DC does, indeed, have numerous car dealerships, nowhere in the Constitution does it state that dealerships—or landfills and airports—are a requirement for statehood.

Trump-endorsed Georgia SOS candidate Jody Hice says D.C. shouldn't be a state because the founders didn't want states that didn't have car dealerships, airports, or garbage dumps. Cars/planes weren't invented for more than 100 years after the Declaration of Independence. pic.twitter.com/nnaCJR1dHe

The one GOP witness who testified against statehood at Monday’s hearing was Zack Smith, a Heritage Foundation fellow who has published a number of articles that make a constitutional case against the legislation. That’s exactly what he did throughout the hearing, but it was in his opening statement that he noted that the framers of the Constitution “wanted to avoid one state having undue influence over the national government.” He argued that DC residents “already impact the national debate” because of how politically engaged they are, visually speaking. “For the members here today, how many of you saw DC statehood yard signs, or bumper stickers, or banners on your way to this hearing today?” Smith said. “Where else in the nation could such simple actions reach so many members of Congress?”

DC shouldn’t become a state because it lacks manufacturing

Midway through the hearing, Rep. Glenn Grothman (R-Wis.) cited a good friend of his who argues that economic wealth comes from manufacturing, agriculture, or natural minerals, “and those are things that I think every state has to some degree.” He then asked the witnesses to fill him in on the number of manufacturing, agriculture, and mining jobs in DC, adding that “all three of which would have to be very tiny compared to what we get in a normal state.”

When DC Mayor Muriel Bowser replied that the district “doesn’t have any mines” but does have heavy investments in the solar and hospitality sectors, Grothman cut her off to accuse her of not answering his question.

Here is Republican Rep. Glenn Grothman arguing that D.C. should not get statehood because it has insufficient manufacturing, agriculture, mining, and drilling. pic.twitter.com/jFnJNZx2CH