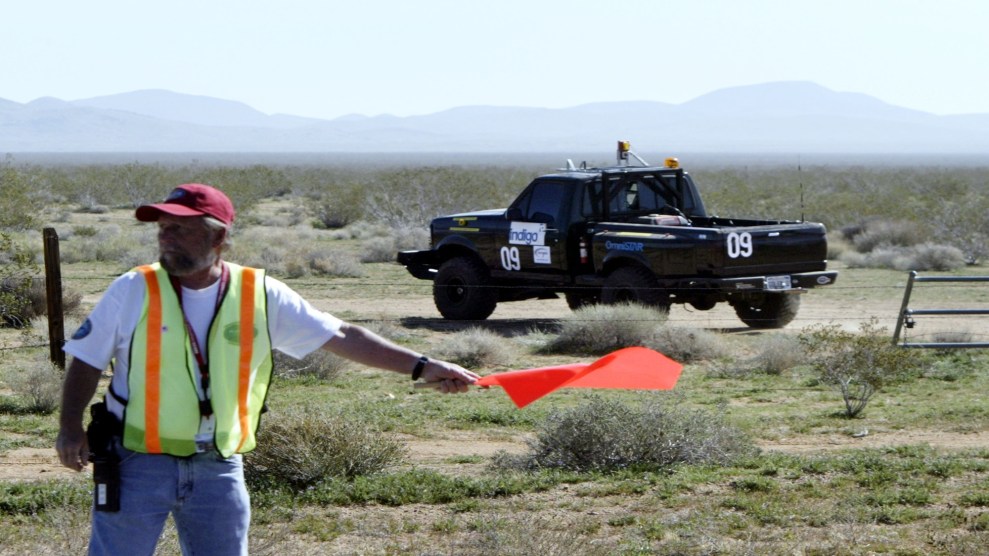 Deep in the Mojave Desert, 60 miles from the city of Barstow, is the Slash X Ranch Cafe, a former ranch where dirt bike riders and ATV adventurers can drink beer and eat burgers with fellow daredevils speeding across the desert. Displayed on a wall alongside trucker caps and taxidermy is a plaque that memorializes the 2004 DARPA Grand Challenge, a 142-mile race whose starting point was at Slash X Ranch Cafe.

It was the first race in the world without human drivers. Instead, it featured the fever-dream inventions — robotic motorcycles, monster Humvees — of a handful of software engineers who were hellbent on creating fully autonomous vehicles and winning the million-dollar prize offered by the Defense Department’s Defense Advanced Research Projects Agency.

In “Driven: The Race to Create the Autonomous Car,” journalist Alex Davies mines court documents and interviews the original participants of the DARPA race to chronicle the heady early days of autonomous vehicle technology and its subsequent evolution into a billion-dollar race between corporate behemoths like Google, Uber, and Detroit automakers to be the first to put autonomous vehicles on the nation’s roads.

These corporations have long promised the American public that self-driving car technology is not only imminent but will change the world for the better — reducing urban congestion, combating greenhouse gas emissions, and saving the lives of some of the roughly 40,000 people who die each year in automobile accidents. The reality is that the self-driving car has yet to deliver on its promise. Nearly two decades after the first DARPA race, no one will read “Driven” while riding in a fully autonomous vehicle.

Davies is a former editor at Wired magazine who now writes on the transportation beat for Business Insider. “Driven” is his debut book and he gives readers a fast-paced, scandal-laced story of the people and ideas that animate the history of autonomous vehicles. It is an entertaining and pithy account by a seriously knowledgeable journalist. Davies captures how the driverless car became such a persistent and beguiling fantasy, one that has held the public imagination for a century. “The dream of a vehicle that drives itself dates back to the early days of the automobile,” he writes, “as people abandoned sentient horses for machines that punished any lapse in attention.”

With tens of millions of cars clogging America’s roads at the end of the 20th century, the human-driven car was an environmental disaster (that also happened to cause countless deaths). Davies compares the daily gridlock of the San Francisco Bay Bridge, for example, to “18th-century urbanites emptying chamber pots from upper story windows, a quotidian sort of insanity.”

California was the site of the earliest self-driving prototype vehicle, a simple cart built 60 years ago by a Stanford University mechanical engineering graduate student, that once redesigned by the Stanford Artificial Intelligence Lab could travel autonomously at about a mile per hour by 1971. But getting from that cart to the mass adoption of driverless cars in our cities and streets is akin to the difference between first flight and traveling to the moon.

As Davies writes, the act of driving is extremely complicated, maybe the most complicated task humans undertake. To truly eliminate the need for a person in the driver’s seat, an autonomous vehicle can’t just connect a human to a remote vehicle, like a drone does; it needs to do everything a human does behind the wheel. In essence, an autonomous vehicle requires senses and a brain.

Davies documents how the director of DARPA, Tony Tether, understood these technological challenges. The agency was created in the heat of the Cold War to compete with the Soviets after they launched Sputnik, and Tether took the helm in June 2001. The terrorist attacks of September 11 shifted the agency’s fortunes, elevating its post-Cold War backwater status and increasing its budget by 50 percent.

One of its mandates, issued by Congress, was to create an unmanned aircraft and combat vehicle fleet. Tether, a lover of science fiction, likened DARPA to Disneyland, a place of “dreams and fantasy becoming reality” and he launched the Grand Challenge to harness the brainpower and ambition of engineers across the country in the service of creating autonomous vehicles.

Davies writes that Tether drew inspiration from the 18th-century race to invent a solution to finding longitude at sea that resulted in the chronometer. The best parts of “Driven” are its account of the sleepless nights, setbacks, and breakthroughs along the way to the starting line of the DARPA Grand Challenge.

Ultimately, though, the first race in 2004 was a massive failure, what Davies colorfully describes as a “convulsing funeral pyre.” “Every vehicle looked like it had crashed into a RadioShack,” Davies writes. No vehicle completed the course (the farthest one went was 7.4 miles). The race was held again in 2005 and has since then taken on a variety of different iterations, including a subterranean challenge in recent years. Many of the race’s early participants, such as Chris Urmson, Sebastian Thrun, and Anthony Levandowski, went on to pioneer Silicon Valley’s big bet on self-driving technology at places like Google and Uber.

To his credit, Davies does not shy away from calling out the failures of the industry to deliver on its promises, writing that even after nearly two decades of research, “where autonomy wasn’t dangerous, it felt disappointing.” Most of the hundreds of companies generating autonomous technology would end up failing.

Davies describes the careers of those who dedicated themselves to driverless cars as “nasty, brutish, and long.” The most dramatic example is Levandowski, who pleaded guilty in 2020 to stealing trade secrets from his former employer, Waymo, and was sentenced to a year and a half in prison before being pardoned by then-President Donald J. Trump.

Davies also points to the tragic fact that seven years after the first DARPA race, the owner of Slash X Ranch Cafe, Brian Lynn, died in a head-on collision on nearby Highway 247 when another driver drifted into the southbound lane in which Lynn was driving with his wife. It is precisely the kind of human-error caused accident that autonomous vehicle technology was supposedly going to prevent. As Davies points out, Slash X Ranch Cafe played a role in “boosting the technology that would come too late to save him.”

By the end of “Driven,” readers may feel they have just read a powerful fable of technological hubris. But Davies doesn’t delve too deeply into criticism of the underlying ideas that may have contributed to this outcome. There’s no mention, for instance, of what journalist Meredith Broussard calls technochauvinism — the problematic belief that technology is always the solution to society’s problems and one she credits with so many of the failures that plague the self-driving automobile industry.

Intriguingly, Davies hints that the same technologies at work in autonomous vehicles might lead to higher forms of artificial intelligence. He mentions that Levandowski even created a church dedicated to the idea that artificial intelligence would allow machines to rule over humans. But what are the consequences for a society of men — and they are mostly men — who hold these utopic ideas and wield their power to influence policy? “Driven” doesn’t weigh in.

After the original Grand Challenge, one technology site wrote, “The reality of the event does not come close to meeting the hype surrounding it.” The same might be said of the dream of self-driving cars. Davies is slightly more optimistic, ending his fable this way: “The ignominious end of the 2004 Grand Challenge was just the start of a much greater race. No one has reached the finish line yet; no one is sure where it lies, exactly. But many are racing forward, toward it. Someday, somehow, some of them will get there.”